A Higher Intake of Energy at Dinner Is Associated with Incident Metabolic Syndrome: A Prospective Cohort Study in Older Adults
Previous Article in Journal

Traditional regional diets are considered as sustainable dietary patterns, while many have been examined with regard to their health benefits. The aim of the present systematic review was to aggerate all evidence on the physiological effects of regional diets among adults at high risk for cardiovascular disease (CVD). Three databases were searched for randomized controlled trials (RCTs) implementing any regional diet (Mediterranean (MedD), Persian, Southern European Atlantic, Japanese, Chinese, new Nordic, or other) while examining cardiovascular risk factors among adults at increased risk. Primary outcomes included anthropometric indices and secondary outcomes involved blood lipid concentrations, glucose metabolism, inflammation and other markers of CVD progression. Twenty RCTs fulfilled the study’s criteria and were included in the qualitative synthesis, with the majority implementing a MedD. Adherence to most of the regional diets induced a reduction in the BW and anthropometric indices of the participants. The majority of RCTs with blood pressure endpoints failed to note a significant reduction in the intervention compared to the comparator arm, with the exception of some new Nordic and MedD ones. Despite the interventions, inflammation markers remained unchanged except for CRP, which was reduced in the intervention groups of one new Nordic, the older Japanese, and the Atlantic diet RCTs. With regard to blood lipids, regional diet interventions either failed to induce significant differences or improved selective blood lipid markers of the participants adhering to the experimental regional diet arms. Finally, in the majority of RCTs glucose metabolism failed to improve. The body of evidence examining the effect of regional dietary patterns on CVD risk among high-risk populations, while employing an RCT design, appears to be limited, with the exception of the MedD. More research is required to advocate for the efficacy of most regional diets with regard to CVD. View Full-Text
Keywords: NCD; obesity; hypertension; medical nutrition therapy; nutrition transition; territorial diet; noncommunicable disease; cardiovascular health; inflammation; sustainable diet NCD; obesity; hypertension; medical nutrition therapy; nutrition transition; territorial diet; noncommunicable disease; cardiovascular health; inflammation; sustainable diet
►▼ Show Figures 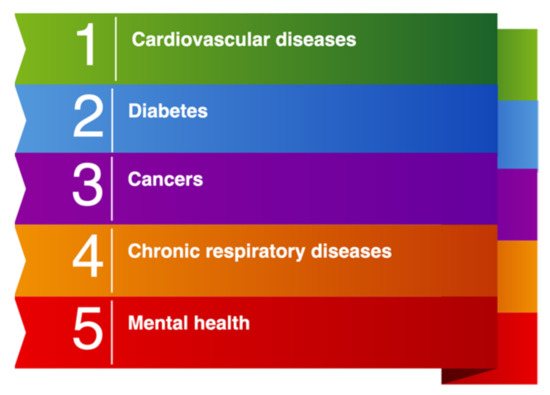