Creatine for Exercise and Sports Performance, with Recovery Considerations for Healthy Populations

Background: The consumption of sweetened beverages is associated with increased risk of metabolic syndrome, cardiovascular disease, and type 2 diabetes mellitus. Objective: We hypothesized that the metabolic effects of fructose in sugary beverages might be modulated by the speed of ingestion in addition to the overall amount. Design: Thirty healthy subjects free of any disease and medication were recruited into two groups. After overnight fasting, subjects in group 1 drank 500 mL of apple juice over an hour by drinking 125 mL every 15 min, while subjects in group 2 drank 500 mL of apple juice over 5 min. Blood samples were collected at time zero and 15, 30, 60, and 120 min after ingestion to be analyzed for serum glucose, insulin, homeostatic model assessment (HOMA-IR) score, fibroblast growth factor 21, copeptin, osmolarity, sodium, blood urea nitrogen (BUN), lactate, uric acid, and phosphate levels. Results: Serum glucose, insulin, HOMA-IR, fibroblast growth factor 21, copeptin, osmolarity, sodium, BUN, and lactate levels increased following apple juice ingestion. The increases were greater in the fast-drinking group, which were more significant after 15 min and 30 min compared to baseline. The changes in uric acid were not statistically different between the groups. Phosphate levels significantly increased only in the fast-drinking group. Conclusion: Fast ingestion of 100% apple juice causes a significantly greater metabolic response, which may be associated with negative long-term outcomes. Our findings suggest that the rate of ingestion must be considered when evaluating the metabolic impacts of sweetened beverage consumption. View Full-Text
Keywords: sugary beverage; fibroblast growth factor 21; osmolarity; copeptin sugary beverage; fibroblast growth factor 21; osmolarity; copeptin
►▼ Show Figures 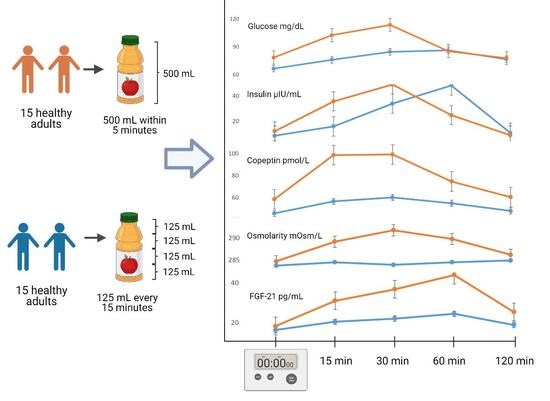