Perspective: Practical Approach to Preventing Subclinical B12 Deficiency in Elderly Population
Next Article in Special Issue

Creatine for Exercise and Sports Performance, with Recovery Considerations for Healthy Populations
Previous Article in Journal

The Application of Creatine Supplementation in Medical Rehabilitation

We have previously published two meta-analyses in 2014 [9] and 2017 [32]. Based on our expertise in the literature, we updated these meta-analyses with recently published studies since the date of the 2017 publication [32]. PubMed and SPORTDiscus databases were searched. Similar to our previous meta-analysis [32] key terms and similar phrases were used (creatine OR creatine monohydrate OR creatine supplementation OR creatine-loading) AND (weight lifting OR weight training OR resistance training, OR resistance exercise OR strength training) AND (age OR middle-age OR older adults OR elderly). Studies with the following criteria were included: (1) healthy and chronic disease participants with a mean age >50 years of age; (2) must be a randomized control trial (RCT) where participants were randomized to an intervention group consisting of creatine monohydrate with resistance training or placebo with resistance training; (3) included outcome measures of whole-body lean tissue mass (determined with dual-energy X-ray absorptiometry [DEXA], hydrostatic weighing, air displacement plethysmography, bioelectrical impedance, or multi-site ultrasound), or upper-(chest press) or lower-body (leg press) muscular strength. Studies were excluded if they were <5 weeks in duration.
Two researchers (S.C.F. and D.G.C.) determined whether the relevant articles were to be included, and any disagreements were resolved by consensus. Databases were searched up until February 2021. Means and standard deviations for baseline and post-training measurements were extracted from each study for estimation of mean changes and the standard deviation of mean changes across the interventions. Change scores were calculated as the pre-training mean subtracted from the post-training mean. Standard deviations (SD) for the change scores were estimated from pre and post-training standard deviations (SD-pre and SD-post) using the following equation derived from the Cochrane Handbook for Systematic Reviews of Interventions:
SD change score = [(SD pre)2 + (SD post)2 − 2 * (correlation between pre and post scores) * SD pre * SD post]1/2
We used 0.8 as the assumed correlation between pre- and post-scores. Heterogeneity was evaluated using χ2 and I2 tests where heterogeneity was indicated by either χ2 p-value ≤ 0.1 or I2 test value > 75%. We used a fixed-effects model for our meta-analysis. Weighted mean differences were calculated for lean tissue mass, along with the 95% CI. As units of measurement differed across studies for measurements of strength, calculated standardized mean differences (SMDs) and 95% CIs for leg press and chest press strength were used. Forest plots were generated using Review Manager 5.3 Software (Cochrane Community, London, UK). Significance was established at p ≤ 0.05. Funnel plots were generated and inspected for publication bias. Adverse events were also extracted.

To examine the influence of creatine dosage, dosing strategy was extracted and classified as either higher (>5 g/day) or lower (≤5 g/day), as well as whether the study included a “loading phase” (≥20 g/day for 5–7 days) and whether creatine was only consumed on resistance training days. Only two studies [15,17] used a creatine dosage <5 g/day. Both absolute and relative (based on body mass) dosing strategy studies were included. We estimated an absolute dose of creatine ingested per day from the product of the average body mass and the relative dose. Several sub-analyses were performed to examine the effects of creatine within each classification. Furthermore, sensitivity analysis was conducted to explore whether the overall effects depended on a single specific study.

3.4. Creatine Only on Training Days

Funnel plots for each meta-analysis were visually inspected and showed no evidence of publication bias.

In the lower-dose studies (≤5 g/day), 10 studies reported no adverse events. One study reported a single mild bout of gastro-intestinal distress from creatine [16] and one study reported an overuse shoulder injury following creatine supplementation [18]. Neither of these studies used a loading phase.
In the higher-dose studies (>5 g/day), five studies reported no adverse events. Two studies similarly reported five incidences of gastrointestinal distress from creatine and two incidences from placebo and two incidences of muscle cramps from both the creatine and placebo group [27,28]. One of the two studies utilizing a loading phase reported an increase in GI distress during the loading phase [29].

Increasing whole-body lean tissue mass and strength is fundamental for mitigating sarcopenia and associated conditions of osteoporosis and physical frailty [3]. Similar to previous meta-analyses [9,32], our results showed that creatine supplementation and resistance training increases measures of lean tissue mass and strength in older adults vs. placebo. However, unique and important results from our sub-analyses indicate that a creatine-loading phase is important for older adults wanting to improve muscle strength. In addition to a creatine-loading phase, a lower daily dosage of creatine (≤5 g) appears sufficient to improve upper-body strength. However, a higher daily dosage of creatine (>5 g) after the loading phase is needed to increase lower-body strength. Regarding the effects of creatine ingestion frequency, creatine supplementation only on resistance training days significantly increased measures of lean tissue mass and strength compared to placebo.

S.C.F. has previously served as a scientific advisor for a company that sold creatine. D.G.C. has conducted industry-sponsored research involving creatine supplementation, received creatine donations for scientific studies and travel support for presentations involving creatine supplementation at scientific conferences. In addition, D.G.C. serves on the Scientific Advisory Board for AlzChem (a company which manufactures creatine) and has previously served as the Chief Scientific Officer for a company that sells creatine products. S.M.O. serves as a member of the Scientific Advisory Board on creatine in health and medicine (AlzChem LLC). S.M.O. owns patent “Sports Supplements Based on Liquid Creatine” at European Patent Office (WO2019150323 A1), and active patent application “Synergistic Creatine” at UK Intellectual Property Office (GB2012773.4). S.M.O. has served as a speaker at Abbott Nutrition, a consultant of Allied Beverages Adriatic and IMLEK, and an advisory board member for the University of Novi Sad School of Medicine, and has received research funding related to creatine from the Serbian Ministry of Education, Science, and Technological Development, Provincial Secretariat for Higher Education and Scientific Research, AlzChem GmbH, KW Pfannenschmidt GmbH, ThermoLife International LLC, and Monster Energy Company. S.M.O. is an employee of the University of Novi Sad and does not own stocks and shares in any organization. The funders had no role in the design of the study; in the collection, analyses, or interpretation of data; in the writing of the manuscript, or in the decision to publish the results. 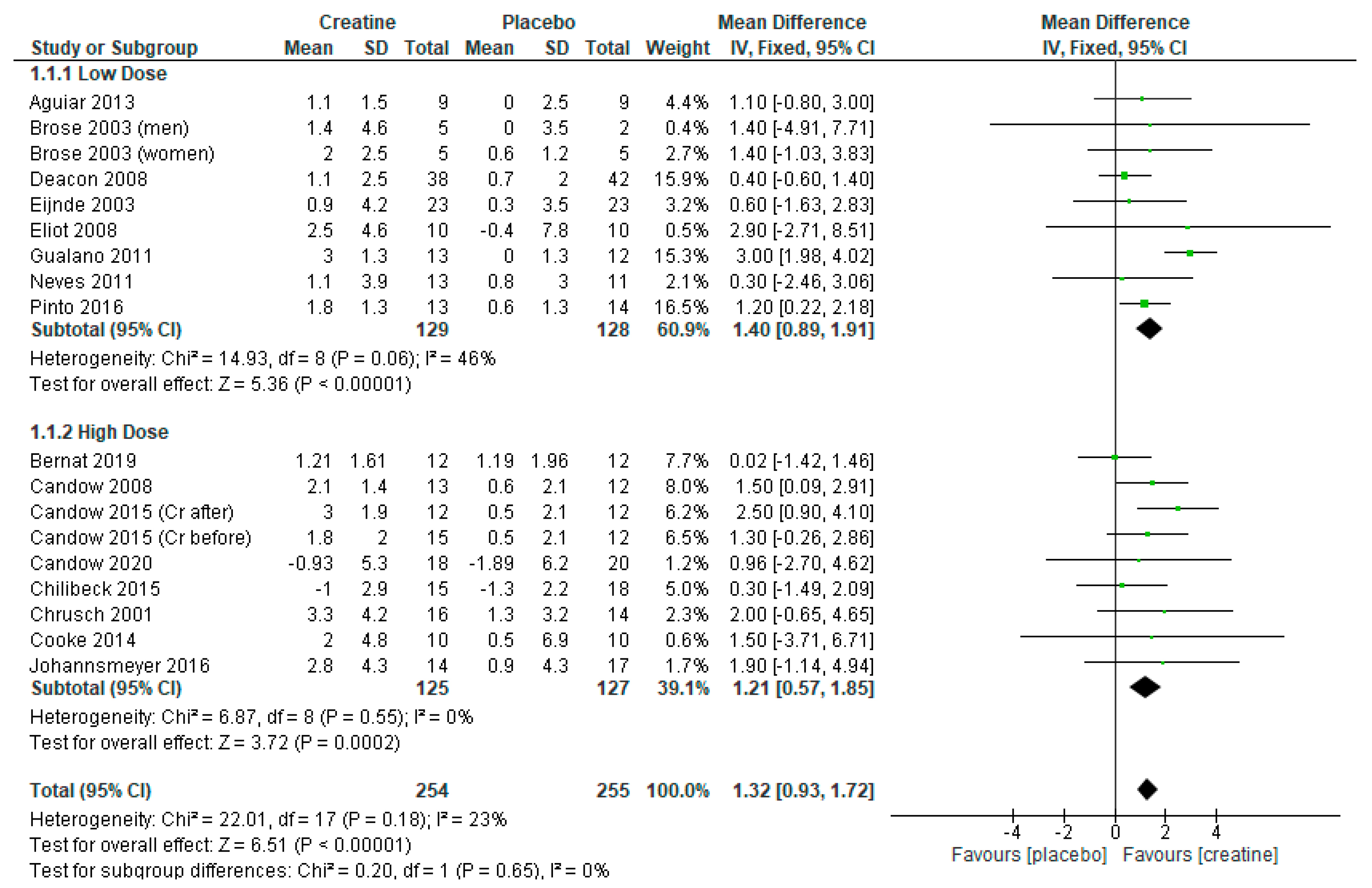