In 2014, 422 million people, nearly 8.5% of the world’s population, were diagnosed with Type 2 Diabetes Mellitus (T2DM). Within 20 years, this number is expected to double, increasing the burden on healthcare systems, partly because of increased co-morbidities such as cardiovascular diseases (CVD) [1].
Daily consumption of fruits and green leafy vegetables can reduce T2DM risk and improve metabolic health outcomes [2]. Increasing evidence also suggests that fruit extracts may help prevent the onset of diabetes, possibly due to their flavonoid content including flavan-3-ols and anthocyanins [3]. Anthocyanins complexed with sugar moieties, such as rutinoside, and polymeric flavan-3-ols, represent a major proportion of flavonoids in fruits [4,5]. Many of these compounds have been found to transit the small intestine intact, after which they can be metabolized by the colonic microbiota [6]. Whilst the bioavailability of intact dietary flavan-3-ols and anthocyanins is relatively low, microbiota-derived metabolites are absorbed more easily and circulate in plasma for significantly longer periods of time [5,6]. Therefore, it has been suggested that microbiota-derived metabolites may contribute to the anti-diabetic effects of fruit, vegetable or fruit extracts [5,6].
The mechanism by which dietary flavonoids affect cardiometabolic outcomes is dependent on the concentration of flavonoids in the diet, on genetic factors that determine enzyme activity, on gut microbiota composition and on lifestyle, which all are highly individualized factors [7]; such factors tend to be overlooked in population-based studies [8]. Therefore, a more in-depth analysis of study population characteristics is required to better understand the variation in responsiveness to dietary interventions with flavonoids.
Higher dietary intakes of anthocyanins and catechins have been associated with a significantly lower risk of T2DM in 60,586 women over a 20-year observation period [9]. Bilberries are one of the richest natural sources of anthocyanins [10,11], whereas grape seeds contain the highest levels of total procyanidins and procyanidin dimers in fruits and vegetables [12]. However, previous studies evaluating the anti-diabetic and cholesterol-lowering effects of bilberry and grape seed extracts in humans have been inconclusive, mainly due to a large variability in outcomes within and between study populations. Often, the heterogeneity in study outcomes was not explored. A meta-analysis by Zhu et al. [13] concluded that dietary interventions with cranberries or blueberries had no effect on cholesterol levels, but intervention with whortleberry and bilberry improved cholesterol levels in subjects at risk of cardiovascular disease, and in subjects with metabolic syndrome and hypercholesterolemia. A systematic review by Woerdeman et al. [14] concluded that interventions with grape polyphenols did not significantly affect glycemia, insulin sensitivity, cholesterol levels or blood pressure, arguably due to differences in study quality, study populations and study durations. A recent meta-analysis, including meta-regression and subgroup analysis to identify sources of heterogeneity in previous reviews, concluded that intervention with grape seed extract decreased LDL cholesterol and triglycerides across studies, and LDL and total cholesterol in studies with less than 10 weeks of intervention, and in those studies providing <300 mg/d of grape seed extract [15]. The meta-analysis by Zhang et al. [16] concluded that grape seed extracts decreased systolic and diastolic blood pressure, with effects being significantly more pronounced in subjects with metabolic syndrome and in pre-hypertensive individuals. Interestingly, intervention with grape seed extract did not affect blood pressure in hypertensive subjects, arguably due to variance in study designs and bias arising from a low sample size [16].
The aim of this critical and systematic review was to investigate the efficacy of, and responsiveness to, different doses and intervention regimes of bilberry extract and grape seed extract to improve glucose and cholesterol metabolism, and blood pressure, in different populations.

The databases Cochrane Library, Ovid Medline (Embase 1996–2021, and Ovid Medline® without revisions 1996–Week 5 2021) and Scopus were consulted up until January 2021 by two independent researchers (T.G. and C.L.). The following search terms were explored within titles, keywords and abstracts: (grape adj1 seed AND extract AND vitis adj1 vinifera) OR (bilberry AND extract AND vaccinium adj1 myrtillus) AND (human AND human adj1 study AND obes* AND Type 2 Diabetes) AND (blood adj1 glucose AND glycated h*emoglobin AND HbA1c) OR (cholesterol) OR (systolic AND diastolic).
Studies fulfilling the following criteria were included in the review: availability of a full-text English publication of the study; studies with a long-term intervention (i.e., ≥4 weeks) with bilberry and/or grape seed extract or a combination of either extract with other fruit extracts; studies executed in healthy subjects or those diagnosed with T2DM, metabolic syndrome, hypercholesterolemia or mild hypertension as classified by the authors of respective studies; studies with a randomized, placebo controlled and single- or double-blind design; studies measuring the following outcomes: fasting blood glucose, HbA1c, total cholesterol, HDL and LDL cholesterol, and systolic and diastolic blood pressure. Studies using fresh or frozen fruits, fruit juices, as well as acute studies and those that had exclusively recruited smokers were excluded from this review.
The following data were extracted from the selected studies: first author name, study duration, type of extract, information on supplement formulation, intervention dose, study design (cross-over/parallel), blinding, randomization, total number of subjects, number of subjects in the intervention and placebo group, number of drop-outs, male/female ratio, age range and BMI range of subjects, health condition, the calculated average percentage change for each of the outcomes between the end of the study and baseline for the intervention and placebo groups, and reported p-values.
The quality of studies was evaluated using the Cochrane method for bias evaluation [17]. The PRISMA checklist was followed to ensure review quality. We calculated a Spearman correlation matrix to explore which factors, such as intervention, dose, study duration, BMI and age were correlated with specific study outcomes, such as fasting blood glucose, HbA1c, total cholesterol, LDL and HDL cholesterol, systolic and diastolic blood pressure. The statistical and visual analysis of data was performed using R, version 4.0.2, and R Studio version 1.2.5042 [18]. The R packages used were corrplot [19] and ggplot2 [20]. No post-hoc test, such as Bonferroni, was applied to correct for the number of correlations as this may have increased the risk of introducing Type 1 errors in an exploratory analysis. Instead, we decided to set the level of significance at p ≤ 0.01.

The results of the literature search and selection process are shown in Figure 1. In total, 4167 records were obtained from the search, and four additional records were identified through reference lists from other reviews. After initially removing duplicate records (n = 2241) based on titles and abstracts, a further 1845 records were excluded as these did not assess interventions with bilberry or grape seed extracts, or were studies which performed in vitro or in animal models. The remaining 85 records were further analyzed for full-text availability. We identified and removed 24 records, which were conference abstracts or registered clinical trials without publications, and removed 33 duplicate records. We also excluded one record as it was not available in English, one record as it did not provide baseline and endpoint data, and two records as these were not available in full text. In total 24 studies were analyzed for this review.

The main characteristics of the 24 selected studies are summarized in Table 1. The studies were performed in nine different countries. The number of volunteers per study ranged from 18 to 160. The study participants were either healthy (n = 3 studies), or healthy and in different stages of menopause (n = 2 studies), diagnosed with T2DM (n = 4 studies), diagnosed with metabolic syndrome (n = 5 studies), diagnosed with hypercholesterolemia (n = 5 studies), or diagnosed with mild hypertension (n = 5 studies). The BMI range across studies was 18 to 39 kg/m2, and the age range of study participants was between 13 and 75 years. Study populations in the USA had on average the highest BMI (age: 48 ± 4 years, BMI: 33 ± 3 kg/m2), whilst study populations in Japan had on average the lowest BMI (age: 52 ± 2 years, BMI: 23 ± 1 kg/m2). The youngest study population was recruited in Iran (age: 39 ± 15 years, BMI: 30 ± 4 kg/m2). Four studies recruited only women, while two studies did not identify the subjects’ sex. The majority of studies (n = 20) performed an intervention with grape seed extract, testing a supplement dose of 100 mg to 1500 mg per day. Four studies evaluated the effect of bilberry and blackcurrant extract at a dose of 320 mg per day. The duration of the intervention period across studies ranged from 4 to 52 weeks. Four studies employed a crossover design where intervention periods lasted four to eight weeks.

3.3. Evaluation of Study and Reporting Quality

3.8. Overall Efficacy of Grape Seed and Bilberry and Blackcurrant Extracts to Modulate Glucose and Cholesterol Metabolism, and Blood Pressure

This research was funded by By-Health Co. Ltd., Guangzhou, China. G.H., N.H., W.R., and B.d.R. are funded by the Scottish Government Rural and Environmental Science and Analytical Services (RESAS).

All data are contained within the article.

B.d.R. is an advisor to the Scientific Advisory Board of By-Health Ltd., Guangzhou, China. By-Health had no role in the design of the study, in the analysis or interpretation of data, in the writing of the manuscript or in the decision to publish the results. 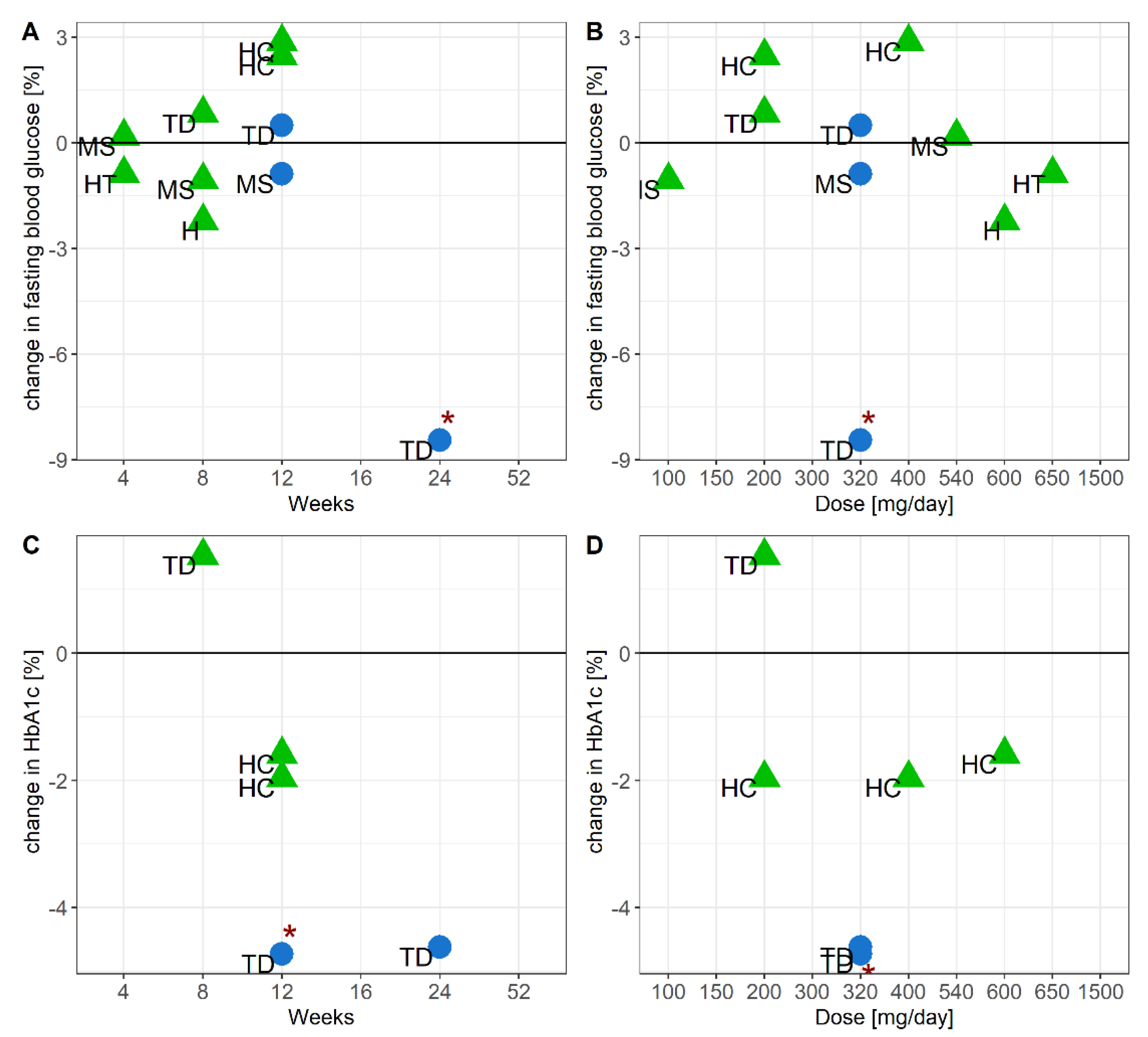 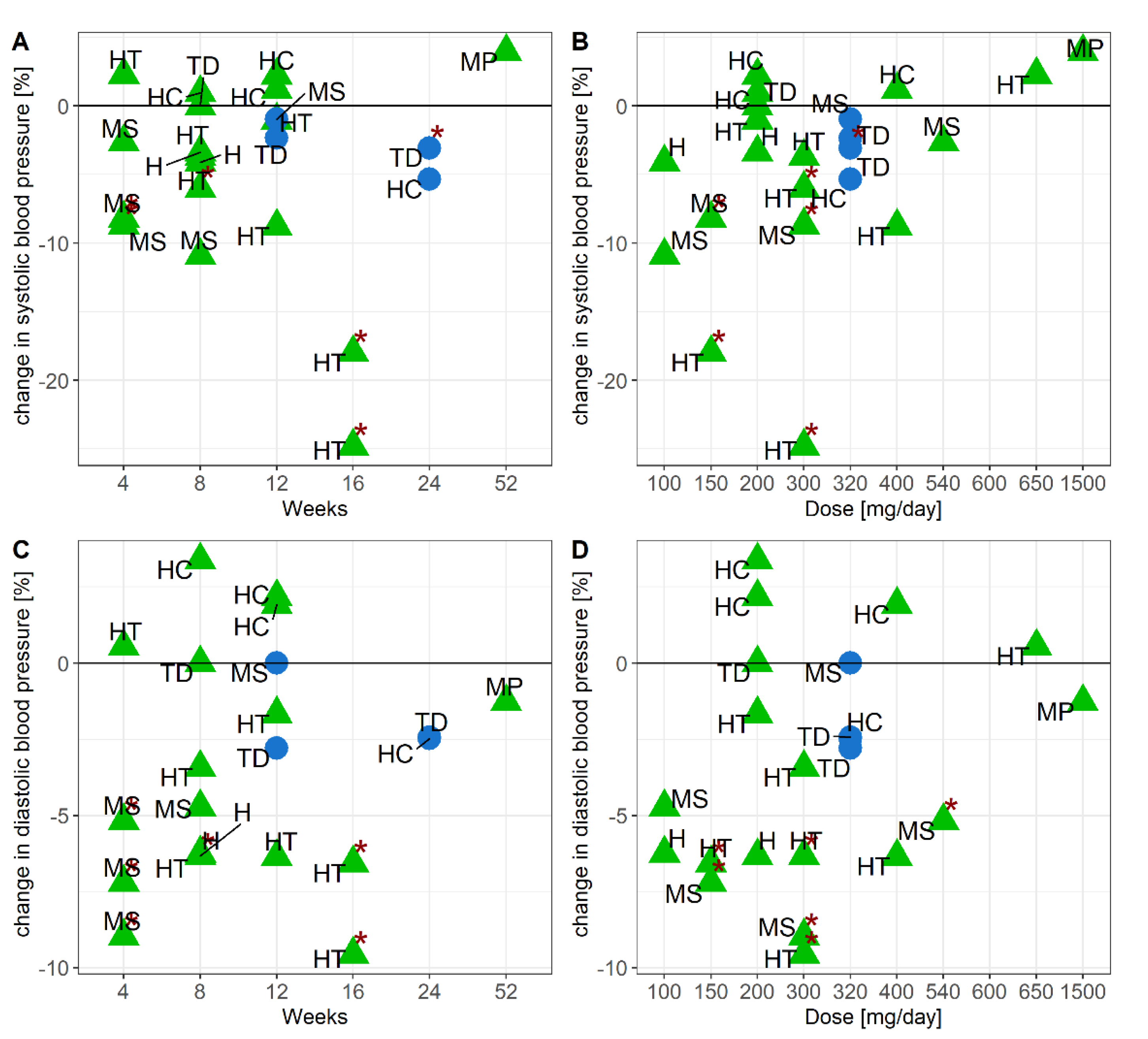 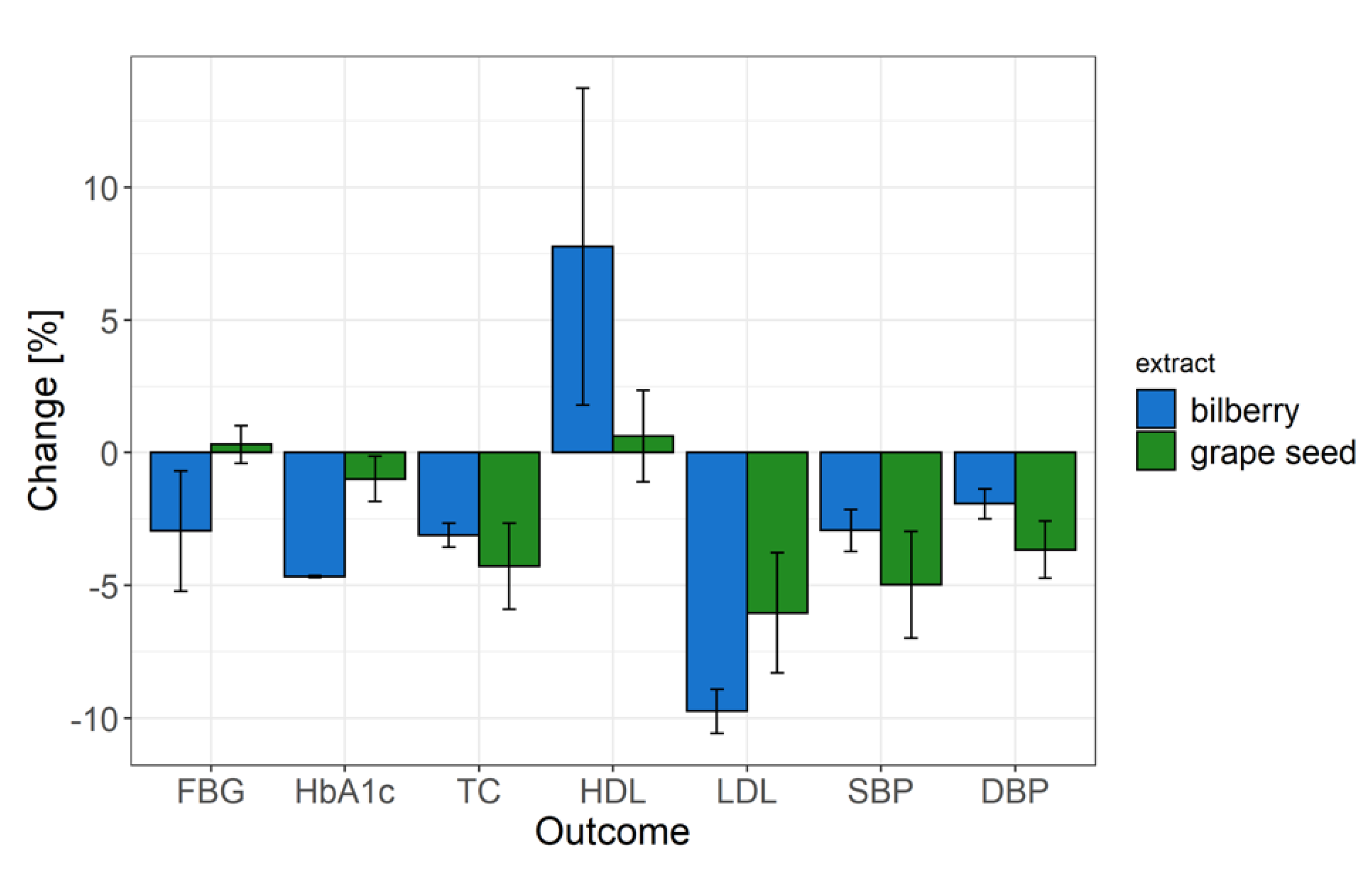