Cardiorespiratory Fitness Predicted by Fibrinogen and Leptin Concentrations in Children with Obesity and Risk for Diabetes: A Cross-Sectional Study and a ROC Curve Analysis
Previous Article in Special Issue

The Role of Fetal, Infant, and Childhood Nutrition in the Timing of Sexual Maturation

How Healthy Are Health-Related Behaviors in University Students: The HOLISTic Study

The aim of this cross-sectional study was to assess the health-related behaviors among university students, with emphasis on health sciences students from Croatia, Italy, Lebanon, Poland, Romania, Spain and Turkey. We included 6222 students in Medicine, Dentistry, Nursing, Pharmacy, Nutrition and Dietetics, Sports Sciences, Veterinary, and Economics enrolled between April 2018 and March 2020. We assessed dietary patterns, sleeping habits, physical activity and perceived stress among students by means of validated questionnaires. The median age ranged between 19 and 24 years, smoking prevalence between 12.0% and 35.4%, and body mass index (BMI) ranged between 21.1 and 23.2 kg/m2. Breakfast was less often and more often consumed daily in Turkey (36.7%), and Italy (75.7%), respectively. The highest Mediterranean diet score was recorded in Spain and Italy, and the lowest in Turkey, followed by students from Croatia, Lebanon, Poland and Romania. Sleep duration, physical activity and stress perception also differed between countries. Multivariable regression analysis revealed a small, but positive association between BMI and several characteristics, including age, female gender, smoking, physical activity, mobile phone use, and perceived stress. A negative association was found between BMI and sleep duration on non-working days. Self-rated health perception was positively associated with female gender, breakfast, physical activity, and time spent studying, and negatively with BMI, smoking and stress. Our results demonstrated diverse habits in students from different countries, some of which were less healthy than anticipated, given their educational background. Greater emphasis needs to be placed on improving the lifestyle of these adolescents and young adults, who will be tomorrow’s healthcare workers. View Full-Text
Keywords: university students; lifestyle habits; lifestyle medicine; health; public health; prevention; NCDs university students; lifestyle habits; lifestyle medicine; health; public health; prevention; NCDs
►▼ Show Figures 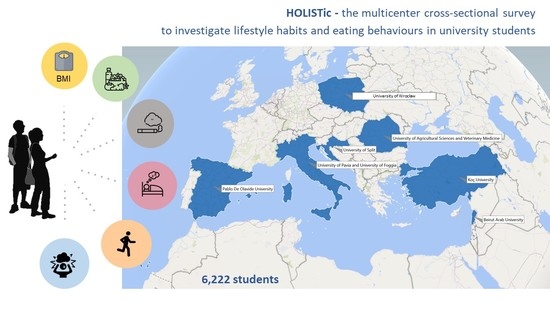