Patterns and Determinants of Essential and Toxic Elements in Chinese Women at Mid-Pregnancy, Late Pregnancy, and Lactation
Next Article in Special Issue

Is Probiotic Supplementation Useful for the Management of Body Weight and Other Anthropometric Measures in Adults Affected by Overweight and Obesity with Metabolic Related Diseases? A Systematic Review and Meta-Analysis
Previous Article in Special Issue

There are numerous and diverse factors enabling the overconsumption of foods, with the sense of taste being one of these factors. There are four well established basic tastes: sweet, sour, salty, and bitter; all with perceptual independence, salience, and hedonic responses to encourage or discourage consumption. More recently, additional tastes have been added to the basic taste list including umami and fat, but they lack the perceptual independence and salience of the basics. There is also emerging evidence of taste responses to kokumi and carbohydrate. One interesting aspect is the link with the new and emerging tastes to macronutrients, with each macronutrient having two distinct perceptual qualities that, perhaps in combination, provide a holistic perception for each macronutrient: fat has fat taste and mouthfeel; protein has umami and kokumi; carbohydrate has sweet and carbohydrate tastes. These new tastes can be sensed in the oral cavity, but they have more influence post- than pre-ingestion. Umami, fat, kokumi, and carbohydrate tastes have been suggested as an independent category named alimentary. This narrative review will present and discuss evidence for macronutrient sensing throughout the alimentary canal and evidence of how each of the alimentary tastes may influence the consumption of foods. View Full-Text
Keywords: taste; obesity; fat; protein; carbohydrate taste; obesity; fat; protein; carbohydrate
►▼ Show Figures 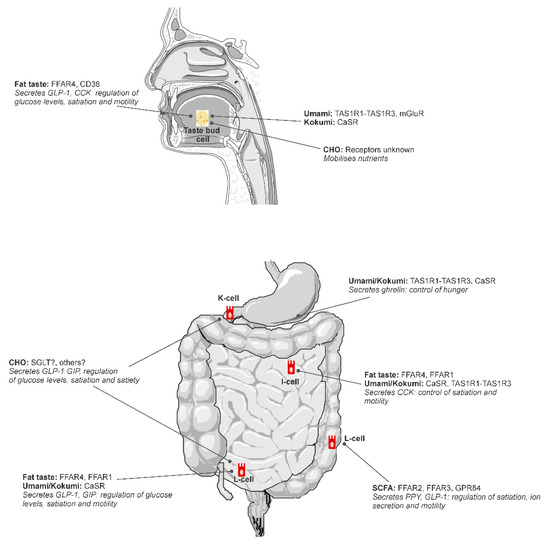