Protective Effects of Lactoferrin against SARS-CoV-2 Infection In Vitro

A novel coronavirus has generated a pandemic outbreak, designated as COVID-19, that was first reported in Wuhan, China, 2019 and spread rapidly all over the world [1]. The 2019 coronavirus is a single-stranded RNA virus, designated as SARS-CoV-2, as it has genetic similarities with SARS-CoV, the virus responsible for the severe acute respiratory syndrome outbreak that occurred in 2002 [2]. The genome of coronaviruses encodes several proteins, including spike (S), thought to initiate the infection, envelope (E), membrane (M) and nucleocapsid (N). The cellular entry of SARS-CoV-2 has been shown to depend on the binding of the viral spike glycoprotein (SgP) to host cell angiotensin converting enzyme 2 (ACE-2) and host cell surface heparan sulfate proteoglycans (HSPGs) [3,4,5].
SARS-CoV-2 is primarily thought to infect the lungs with transmission through respiratory droplets (aerosols), mainly during close person-to-person contact [6]. Moreover, the intestine represents another viral target organ supporting SARS-CoV-2 replication [7], with viral shedding into stool occurring in a substantial portion of patients, which makes fecal-oral transmission also plausible [8]. Effective therapeutic options against SARS-CoV-2 are still under development. Currently, therapeutic interventions against SARS-Cov-2 infection rely on supportive care and respiratory support for severely ill people as well as some antivirals [9,10], and drugs targeted against the abnormal immune-inflammatory response [10,11].
The development of novel antiviral drugs requires considerable time and efforts. Therefore, options based on natural products could represent reliable and safe integrative tools against COVID-19. Lactoferrin (LF), a glycoprotein belonging to the transferrin family, naturally present in various human secretions, is known to bind and transport iron and to play an important role in regulating iron homeostasis [12]. In-vitro studies on human intestinal, hepatic and T cell lines showed that LF has an interesting potential in fighting viral and bacterial infections and to exert anti-inflammatory and immune-modulating activity [13,14,15]. Many studies have proven that LF can exert significant effects against viruses, including hepatitis C virus, herpes simplex virus, human immunodeficiency virus, poliovirus and rotavirus, with in vitro EC50 values (half maximal effective concentration) generally in the micromolar range [16,17]. The LF antiviral effect generally occurs in the early phase of infection, preventing the entry of viral particles into the host cells, either by directly binding to the viral particles or blocking the virus receptor or co-receptor present on the host cell [18]. Notably, LF is able to prevent the internalization of some viruses, among which SARS pseudovirus [13], by binding to cell-surface HSPGs, which have been shown to act as a necessary co-factors also for SARS-CoV-2 infection [5,19]. Moreover, LF was shown to inhibit the entry of murine coronavirus [20], as well as human coronaviruses hCoV-NL63 [21], that are closely related to SARS-CoV-2. LF was also reported to selectively inhibit cathepsin L [22], a lysosomal peptidase critical for endocytosis, which is a cell entry pathway used by SARS-CoV-2 [23,24]. Another major aspect of LF bioactivity relates to its immunomodulatory and anti-inflammatory actions [25]. Indeed, LF was demonstrated to reduce interleukin 6 (IL6) and tumor necrosis factor-alpha (TNFα) in experimental settings simulating sepsis [26]. Thus, it is possible that LF may modulate the overactive immune and inflammatory response to SARS-CoV-2 that in some patients leads to acute respiratory distress and subsequent mortality [27]. Overall, LF could represent a non-toxic health supplement to prevent infection as well as an adjunct treatment for those who have developed COVID-19 [28].
In vitro cell models for SARS-CoV-2 research are essential for understanding the viral life cycle, for amplifying and isolating the virus for further research and for preclinical evaluation of therapeutic molecules [29]. Promising preliminary evidence on the immunomodulatory properties of this LF under study were obtained by testing the glycoprotein on intestinal cell lines prior to the first Italian COVID-19 outbreak. In this study, we used the intestinal epithelial Caco-2 cell line, expressing ACE2 receptor, to investigate the effects of LF on antiviral immune response gene expression and SARS-CoV-2 infection in vitro.

Total RNA was isolated using the E.Z.N.A. Total RNA Kit I (Omega Bio-Tek Inc., Norcross, GA, USA) following the manufacturer’s instructions. Contaminating DNA was removed by incubation with RNase-free DNase I set (Omega Bio-Tek Inc., Norcross, GA, USA). Complementary DNA synthesis and amplification were performed using the iTaqTM Universal Probes One-Step Kit (Bio-Rad, Milan, Italy) according to the manufacturer’s directions in an ABI PRISM 7000 Sequence Detection System (Applied Biosystems, Foster City, CA, USA). The cycling conditions were: 50 °C for 10 min, 95 °C for 3 min, and 40 cycles at 95 °C for 15 s and 60 °C for 60 s. The expression of the target gene was normalized to the expression of the GAPDH housekeeping gene. The specific forward and reverse primers used are summarized in Table 1 and were designed with Primer-BLAST software. RdRp IP2 and CoV E primers specific for SARS-CoV-2 detection were taken from the Pasteur Institute and Charitè protocol, respectively [30]. Data are presented as a mean fold change over the control.

The antiviral immunomodulatory effects of LF were tested In vitro using human intestinal epithelial Caco-2 cells. Confluent cells were supplemented with 100 μg/mL LF for 3 h and antiviral immune gene expression was analyzed 24 h post initial treatment. The transcript levels of both antiviral cytokines interferon (IFN) alpha (IFNA1) and beta (IFNB1) were significantly enhanced by LF (Figure 2A). Furthermore, LF treatment could also induce the mRNA expression of toll-like receptor 3 (TLR3) and 7 (TLR7), which are pattern recognition receptors involved in sensing of RNA viruses (Figure 2B), and of interferon regulatory factor 3 (IRF3) and 7 (IRF7), as well as mitochondrial antiviral-signaling (MAVS), which participate to antiviral innate immunity response signaling pathways (Figure 2C). LF also led to an increase, although not significant, in the expression of interferon induced with helicase C domain 1 (IFIH1), which encodes a cytoplasmic receptor critical for sensing of RNA viruses (Figure 2B). Overall, these results suggest that LF has antiviral immunomodulatory properties in vitro.

Conceptualization, C.S., P.B. and I.C.; investigation, C.S., M.E. and A.B.; data curation, M.S. and P.B.; writing—original draft preparation, M.S.; writing—review and editing, C.B., S.G., F.P. and I.C. All authors have read and agreed to the published version of the manuscript.

The data presented in this study are available on request from the correspondence author. 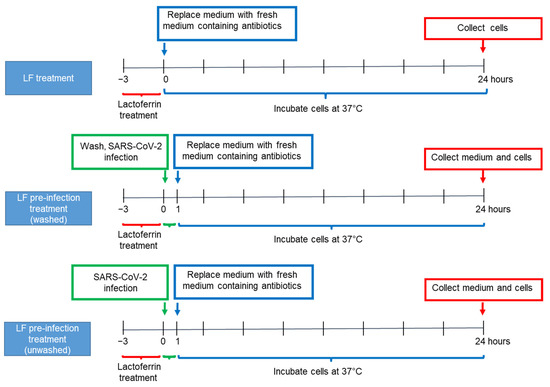 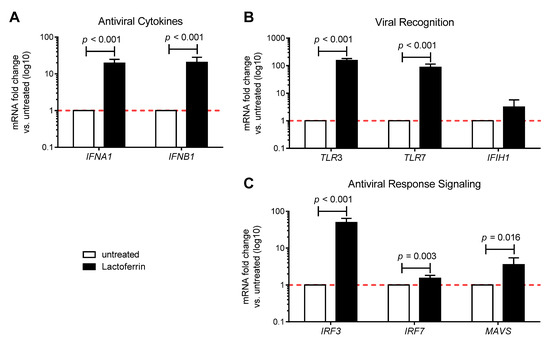 Table 1. Primers used in the study.
Table 1. Primers used in the study.
© 2021 by the authors. Licensee MDPI, Basel, Switzerland. This article is an open access article distributed under the terms and conditions of the Creative Commons Attribution (CC BY) license (http://creativecommons.org/licenses/by/4.0/).
We use cookies on our website to ensure you get the best experience. Read more about our cookies here.
Accept
We have just recently launched a new version of our website. Help us to further improve by taking part in this short 5 minute survey here. here.
Never show this again