L-Carnitine’s Effect on the Biomarkers of Metabolic Syndrome: A Systematic Review and Meta-Analysis of Randomized Controlled Trials

A systematic review and meta-analysis of randomized controlled trials (RCTs) was carried out to assess L-carnitine supplements’ influence on the biomarkers of metabolic syndrome (MetSyn). PubMed, EMBASE, Cochrane library, and CINAHL were used to collect RCT studies published prior to February 2020. RCT studies were included if they had at least one of the following biomarker outcome measurements: waist circumference (WC), blood pressure (BP), fasting blood sugar (FBS), triglyceride (TG), or high density lipoprotein-cholesterol (HDLc). Nine of twenty studies with adequate methodological quality were included in this meta-analysis. The dose of L-carnitine supplementation administered varied between 0.75 and 3 g/day for durations of 8–24 weeks. L-carnitine supplementation significantly reduced WC and systolic BP (SBP), with no significant effects on FBS, TG, and HDLc. We found that L-carnitine supplementation at a dose of more than 1 g/d significantly reduced FBS and TG and increased HDLc. In conclusion, L-carnitine supplementation is correlated with a significant reduction of WC and BP. A dose of 1–3 g/d could improve the biomarkers of MetSyn by reducing FBS and TG and increasing HDLc.
Keywords: L-carnitine; metabolic syndrome; waist circumference; blood pressure; fasting blood sugar; triglyceride; HDL-cholesterol L-carnitine; metabolic syndrome; waist circumference; blood pressure; fasting blood sugar; triglyceride; HDL-cholesterol

Metabolic syndrome (MetSyn) is a significant threat to public health, resulting in increased mortality, disability, and medical expenses, and it has increased in prevalence over the past decades. MetSyn is a cluster of risk factors associated with cardiovascular disease and diabetes development, first described by Reaven in 1988 [1]. These factors include insulin resistance, type 2 diabetes or impaired glucose tolerance, hypertension, dyslipidemia, and abdominal obesity [2].
Carnitine exists in two forms, D-carnitine and L-carnitine, but only L-carnitine has biological action, while D-carnitine inhibits the action of L-type carnitine [3]. L-carnitine is a non-protein amino acid, the primary sources of which in humans include both diet and endogenous synthesis. It is widely found in animal foods such as meat, fish, milk, and dairy products and is mainly synthesized in the liver and kidneys from lysine and methionine [4]. L-carnitine plays a vital role in lipid metabolism by transporting long-chain fatty acids into the mitochondria, thereby stimulating beta-oxidation.
Regarding the two effects of L-carnitine on glucose and lipid metabolism, it may help metabolic disorders such as type 2 diabetes and hypertriglyceridemia. L-carnitine is a popular supplement for weight loss and fat burning purposes. A meta-analysis showed that L-carnitine supplementation reduced body weight, body mass index, and fat mass [5,6]. L-carnitine supplementation can affect BP levels by reducing interactions with the nitric oxide pathway and insulin resistance [7]. Askarpour et al. [8] indicated that L-carnitine supplementation at a dose of ≥2 g/day decreases diastolic blood pressure (DBP) without affecting systolic BP (SBP) levels. L-carnitine supplementation at a dose of 2–3 g/day was associated with improved fasting blood sugar (FBS) and insulin resistance by increasing carbohydrate oxidation and reducing fatty acid oxidation [9,10]. L-carnitine is a critical element in the beta-oxidation of fatty acids and reduces free fatty acid availability for triglyceride (TG) synthesis. Malaguarnera et al. [11] reported that L-carnitine significantly decreased TG concentrations, whereas it increased HDLc concentrations.
To date, no meta-analysis on the use of L-carnitine supplements has been conducted to improve the biomarkers of MetSyn. It is crucial to systematically review the existing evidence regarding L-carnitine intake in improving the biomarkers of MetSyn. This study is the first to investigate the effect of L-carnitine supplementation on the biomarkers of MetSyn.

The following electronic databases were searched for articles: PubMed, EMBASE, the Cochrane Library, and CINAHL (EBSCO). The search time frame ranged from the date of inception of each database until February 2020. The search terms used were as follows: intervention (“carnitine” OR “L-carnitine” OR “L-carnitine tartrate”), outcomes (“metabolic syndrome” OR “syndrome X” OR “Metabolic Syndrome X” OR “Insulin Resistance Syndrome X” OR “Metabolic X Syndrome” OR “Reaven Syndrome X” OR “Metabolic Cardiovascular Syndrome” OR “HDL Lipoprotein” OR “High-Density Lipoprotein” OR “HDL” OR “HDL-c” OR “HDL cholesterol” OR “cholesterol” OR “hypertension” OR “High Blood Pressure” OR “Blood Pressure” OR “Triacylglycerol” OR “Triglyceride” OR “Fasting Blood Sugar” OR “Fasting Blood glucose” OR “FBS” OR “Waist Circumference” OR “WC”), and study design (“intervention” OR “trial” OR “randomized” OR “randomized” OR “random” OR “randomly” OR “placebo” OR “RCT”). This study was restricted to articles published in the English language.

The inclusion criteria for this meta-analysis were (a) population: involving men and women aged over 18 years; (b) intervention: L-carnitine supplement (without other drugs) intervention for at least two weeks; (c) control: control group not receiving the intervention; (d) outcomes: changes in waist circumference (WC), BP, FBS, TG, or HDLc; and (e) study design: randomized controlled trial (RCT). This review’s exclusion criteria were as follows: nonhuman subjects; non-intervention; intervention for carnitine deficiency; carnitine combined with other medications; non-RCT studies, including cohort, case–control, cross-sectional, reviews, and commentaries; discordance in the outcome of MetSyn; and non-English publications.
Two reviewers (MC and SP) independently selected articles by applying the inclusion and exclusion criteria to identify relevant studies. Any trials that were not excluded based on title and abstract were reviewed in full-text by both reviewers. Any discrepancies between reviewers at each step were resolved through discussion until consensus was reached. Disagreements between reviewers were resolved by a third reviewer (ML).

Data extraction was completed by one reviewer (MC) and was checked for accuracy by another reviewer (SP). Data were extracted on the study information (author’s surname, country location, and publication year), characteristics of the subjects (total sample size), and details of the trial (duration and dose of intervention, and biomarkers of MetSyn).
The quality assessment was done using the Cochrane Risk of Bias (ROB) tool. [12] For assessing the ROB in RCTs, each component was categorized as having high, low, or unclear ROB; the components were random sequence generation, allocation concealment, blinding of participants and personnel, blinding of outcome assessment, incomplete outcome data, selective outcome reporting, and other sources of bias. Two reviewers (MC and SP) determined each article’s quality, and a consensus was reached on the ROB score through discussion. A third reviewer (ML) resolved disagreements about the risk of bias.

The mean differences (MDs) between the baseline and final value of the factors under study were extracted from the studies. Meta-analysis was conducted using RevMan software (version 5.3; Review Manager (RevMan), Nordic Cochrane Centre, Copenhagen, Denmark). The I2 statistic was used to assess for statistical heterogeneity amongst studies. A fixed-effects model was used if there was no significant heterogeneity of the data, I2 ≤ 50%; I2 > 50% with p ≤ 0.1 indicated statistical heterogeneity, and a random-effects model was then adopted [12]. Sub-group analysis was also conducted via the same methods.
When the standard deviation (SD) for mean differences was not reported, it was calculated by the following formula: SD = square root((SD baseline)2 + (SD final)2 − (2R × SD baseline × SD final)), assuming a correlation coefficient (R) of 0.5 [13]. Effect sizes were expressed as the MD and a 95% confidence interval (CI). Funnel plots were used to assess the publication bias.

The search identified 2154 articles, and following the removal of duplicates, the titles and abstracts of 1705 articles were screened. Most of the articles (n = 1685) were excluded after reading the titles or abstracts, since they were not relevant. After assessing the full text of 20 potentially related articles, 9 articles were included in our analysis. The most important reasons for exclusion were as follows: eight articles reported L-carnitine administered in combination with other components (or drugs), two articles were presented inappropriately for a meta-analysis, and one article was an intervention study on carnitine deficiency. Figure 1 shows the details of the study identification and selection process.

3.2. Characteristics of the Included RCT Studies

The review included 508 participants from nine studies in meta-analyses, and detailed information of the included studies is summarized in Table 1. Five of the studies were conducted in Iran [14,15,16,17,18], and two in Italy [11,19]. The other trials were conducted in Japan [20] and China [21]. The studies were performed in subjects with diabetes mellitus [11,14,21], non-alcoholic steatohepatitis [14,15,19], and knee osteoarthritis [16,17] and in those undergoing hemodialysis [18,20]. The mean age of the subjects was at least 41.6 years in each study. The sample size was from 18 to 81. The duration of treatment in the studies was between 8 and 24 weeks, and 12 weeks was the most common duration used for interventions. Six RCTs used L-carnitine alone [14,16,17,18,20,21]; one RCT used L-carnitine in combination with calorie restriction [11]; and two RCTs used a combination of L-carnitine, calorie restriction, and exercise [15,19]. The daily dose of L-carnitine used for supplementation ranged from 0.75 to 3 g/day, and 2 g/day was the most common dose used for intervention. Two RCTs showed changes in WC, two in BP, five in FBS, six in TG, and five in HDLc.

3.3. Risk of Bias in the Included RCT Studies

The quality of each of the nine RCTs was evaluated with regard to seven aspects using the ROB scale in the Cochrane Handbook for Systematic Reviews of Interventions of the Cochrane Collaboration. Although all the included trials reported “randomly allocating” participants, only seven studies reported generating random numbers by using a computer-generated randomization schedule, a random number table, envelopes, random block, or centralized randomization [11,14,17,18,19,20,21]. Two studies described allocation concealment [15,16]. Eight studies reported the dropout rate [11,14,16,17,18,19,20,21], but the remaining study was unclear about the dropout rate [15]. Three studies provided information about the trial registry [14,16,17]. Reporting bias was assessed by judging the consistency between results in the method section of the publication and the protocol. All other trials provided no information on the trial registry. This was assessed as an unclear risk of bias. For other biases, all studies were assessed as having a low risk for baseline comparability (Figure 2).

3.4. Effects of L-Carnitine Supplementation on Biomarkers of MetSyn

All authors contributed for this research articles as follows: conceptualization & project administration, M.L.; methodology and statistics analysis, M.C. and S.P.; writing—original draft preparation, M.C.; writing—review and editing, M.C. and M.L. All authors have read and agreed to the published version of the manuscript.

This work was supported by the National Research Foundation of Korea (NRF) grant funded by the Korea Government (MSIP; 2019R1A2C1008434).

We appreciate D.W. Kim of National Open University (Seoul, Korea) for supporting comments on this work as part of the “carnitine” subcommittee for KDRI. 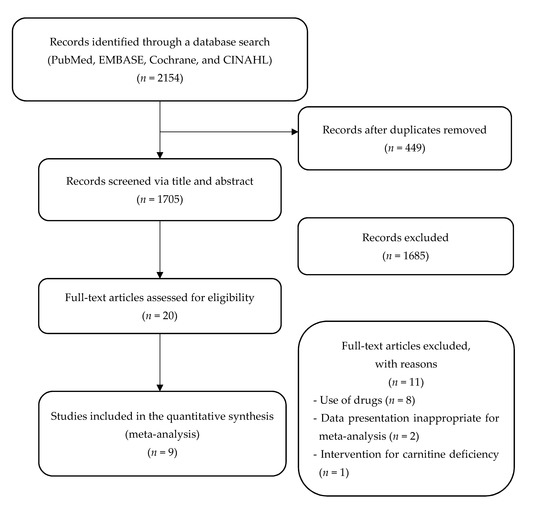 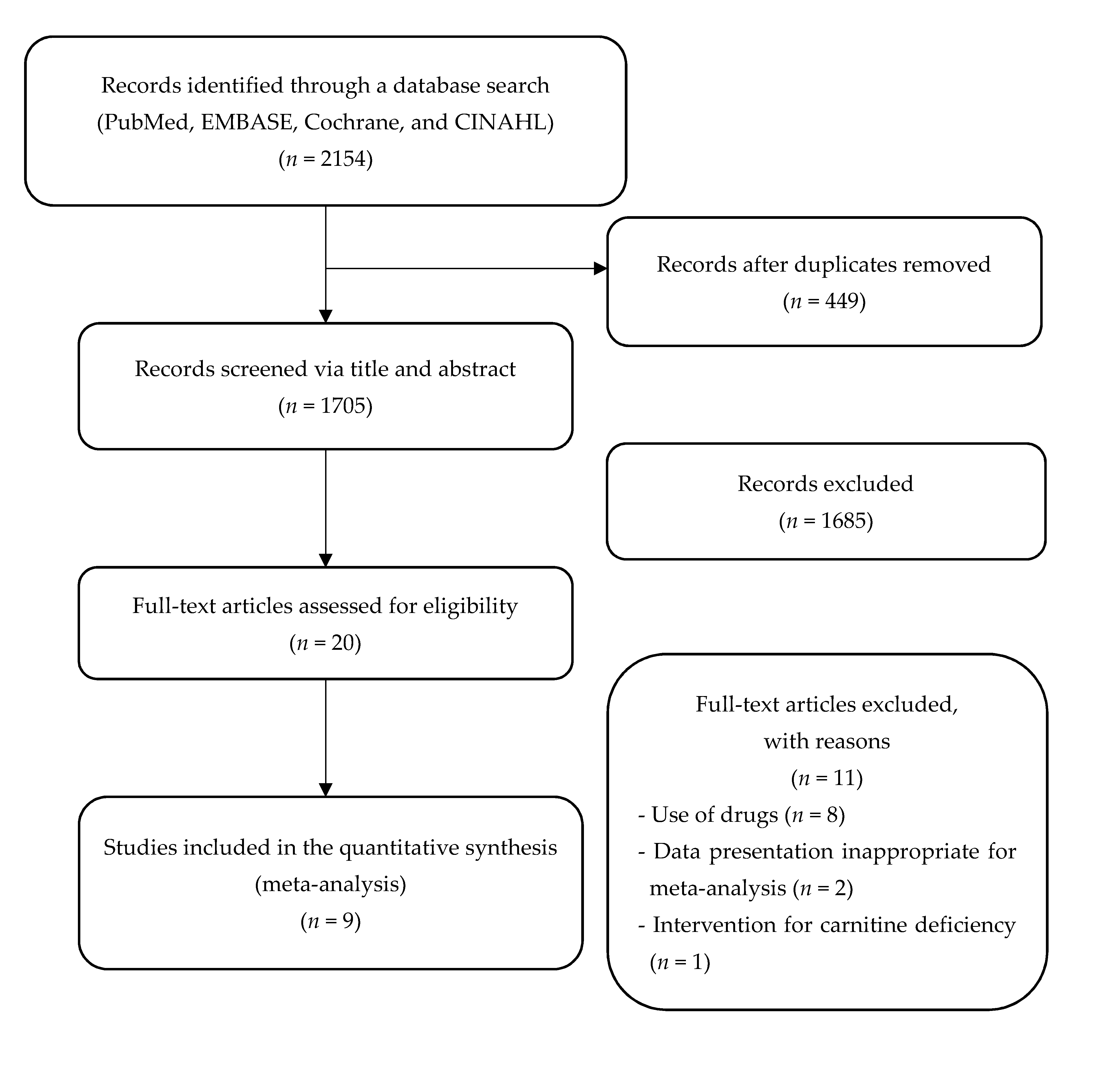 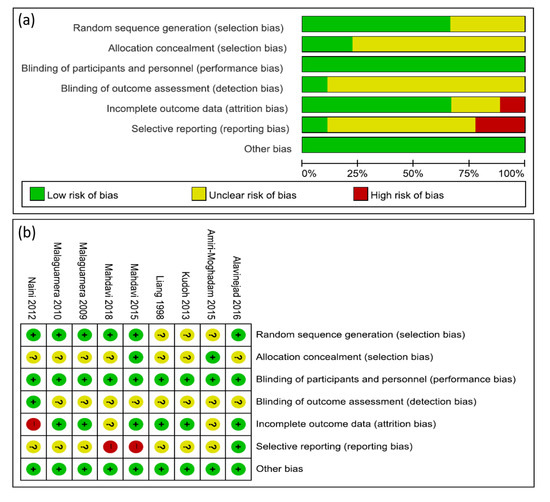 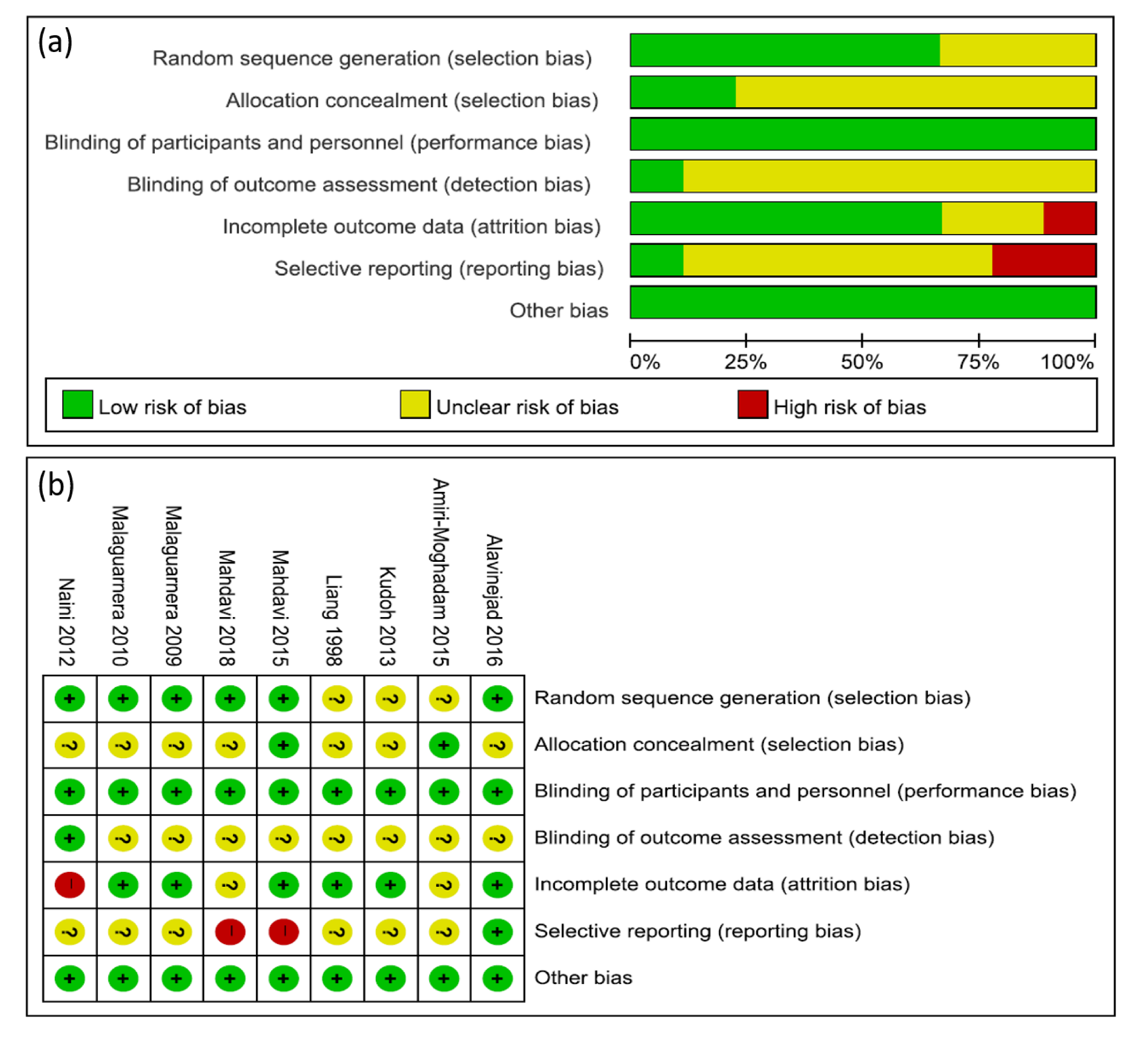 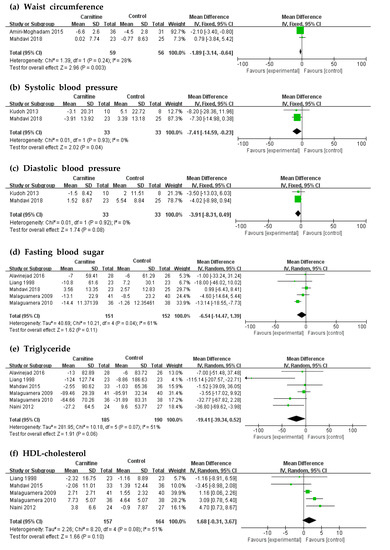 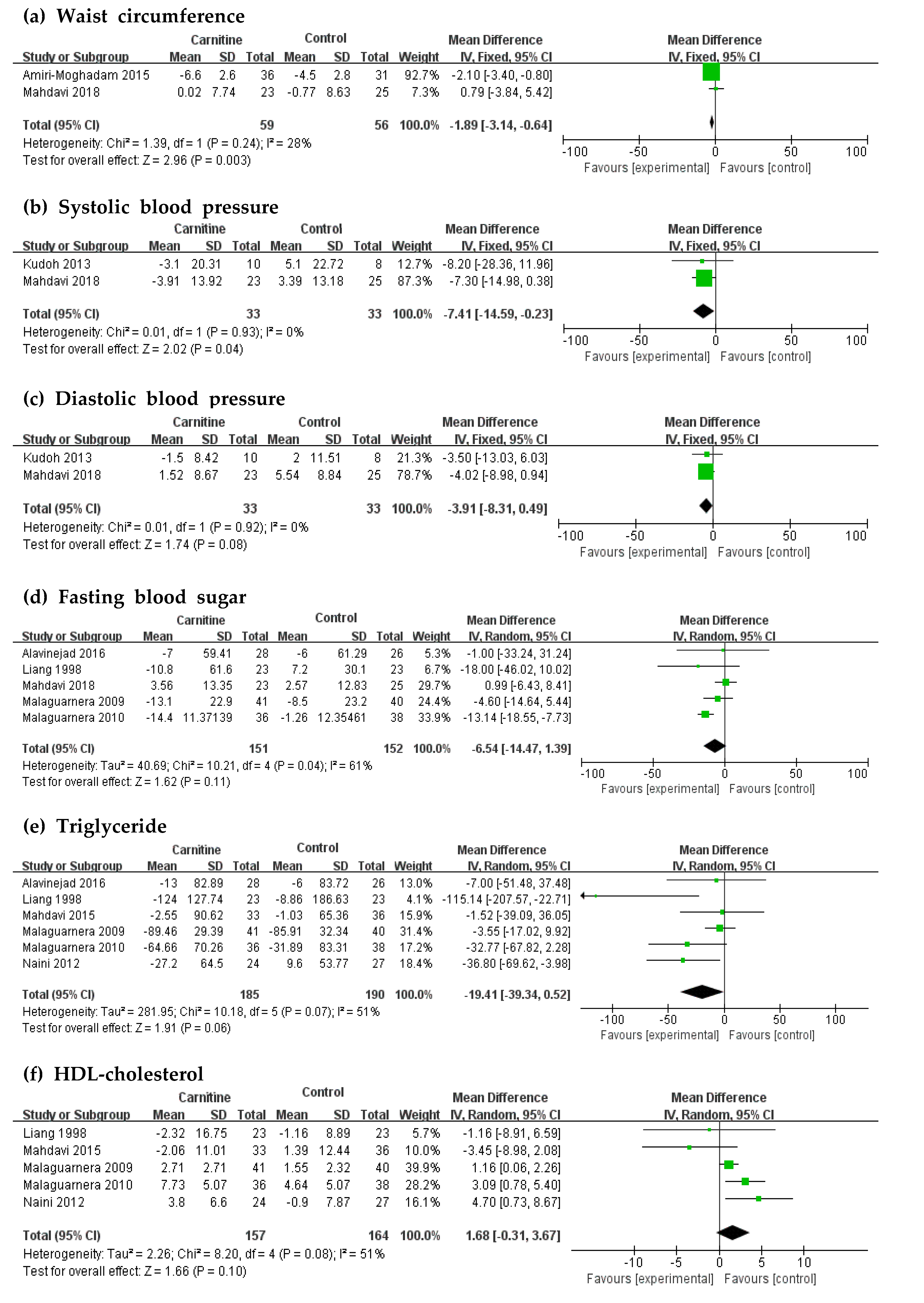 Table 4. Subgroup analysis by L-carnitine dose.
Table 4. Subgroup analysis by L-carnitine dose.
Abbreviations: RCT: randomized controlled trials, MD: mean differences, CI: confidence interval, FBS: fasting blood sugar, TG: triglyceride, HDL-C: High density lipoprotein-cholesterol.
© 2020 by the authors. Licensee MDPI, Basel, Switzerland. This article is an open access article distributed under the terms and conditions of the Creative Commons Attribution (CC BY) license (http://creativecommons.org/licenses/by/4.0/).
We use cookies on our website to ensure you get the best experience. Read more about our cookies here.
Accept
We have just recently launched a new version of our website. Help us to further improve by taking part in this short 5 minute survey here. here.
Never show this again