Changes in Nutrient Declaration after the Food Labeling and Advertising Law in Chile: A Longitudinal Approach

The most prevalent causes of mortality and morbidity in Chile relate to non-communicable diseases (NCD), with one third of the population classified as obese [1]. The high consumption of energy and nutrients of concern based on foods high in sugars, sodium and saturated fats is the most important risk factor associated with diet-related NCD [2]. Furthermore, 28.6% of total energy intake of the Chilean diet is derived from ultra-processed foods [3].
International organizations, such as the World Health Organization (WHO), the Pan American Health Organization (PAHO) and the Organization for Economic Co-operation and Development (OECD) have encouraged countries to prioritize prevention of overweight and obesity in public health polices, calling for policies focused on market regulation and policies to revert tendencies of increased consumption of unhealthy foods. In addition, policies on the restriction of sales of processed foods, sugary drinks and the poor nutritional content of fast food and its relation to NCD are encouraged [4,5,6].
In this context, Chile has implemented several strategies to decrease the burden of obesity and chronic diseases, including specific laws, plans, and programs [7]. A pioneer in the region, one of the most important was the Food Labeling and Advertising Law (Law 20.606); An innovative policy that implemented a nutritional profile limit for energy and nutrients of concern (total sugars, saturated fats, sodium) for incorporating a front-of-package (FoP) “high in” warning label. Moreover, this same regulation restricts the marketing of “high in” foods to children under 14y and prohibited the sale of these products at schools. The implementation of the Law 20.606 occurred in three periods: 2016 (less restrictive limits), 2018 (more restrictive limits) and 2019 (final limits for energy and nutrients of concern). The primary focus of this regulation was to inform consumers about the high content of energy, total sugar, saturated fat and sodium in processed foods and to improve the food environment for children, restricting their exposure to excessive advertising and sales of unhealthy foods [8,9]. Another objective of this regulation was to support the reformulation of processed foods, decreasing total sugars, saturated fats and sodium content or replacing ingredients that improve the nutrient profile.
The presence of FoP warning labels on products improve consumer comprehension of nutritional facts, help consumers identify products high in nutrients of concern, and discourage consumers from purchasing these products [10,11]. An Australian study showed that FoP labels could reduce intended sugar-sweetened beverages purchases independent of type, with the magnitude of effect greatest for graphic warning labels (OR: 0.22; 95% CI: 0.14–0.35) [12].
Researchers compared the Chilean FoP warning label with the traffic light system among children in grades 4 to 6, and showed a positive effect of the Chilean model in the choices of processed foods (wafer cookies and orange juice), demonstrating a possible impact on the consumption of nutrients of concern [13]. The availability of unhealthy foods in school kiosks in the capital, Santiago, was analyzed in 2014 and six months before the law came into force in 2016. The authors found a reduction in availability of 75.4% of these products and a reduction in energy, total sugar, saturated fat and sodium in the nutrient content of solid products [14], demonstrating an overall positive outcome of the Law, related to an improvement of the school food environment.
Few studies have established the relationship between FoP warning label implementation and product reformulation. In a simulation study, Ares and cols (2018) found that FoP warning labels could improve consumer intention to select more healthful foods, decreasing intake of nutrients of concern [15]. Another simulation study investigated consumer willingness to pay for a reformulated product and found that this condition was affected by the brand type and sodium and fat reductions in sausages samples [16]. These results demonstrate that implementation of a FoP warning label system could be followed by a reduction in consumption of unhealthy foods after reformulation, which, in turn, could reduce the exposure to this diet-related risk factor for NCD.
Kanter et al. (2016) demonstrated a minimal impact of product reformulation before Law 20.606 implementation in Chile, with few reductions in energy content and increases in some nutrients of concern by food groups [17]. There have been no studies considering the latest implementation period (June 2019) of the law. Thus, the purpose of this study was to evaluate the impact of Law 20.606 in energy, total sugar, saturated fat and sodium declaration of packaged foods commercialized in Chile, comparing nutrient content information prior to the law implementation (2013) and after the last implementation stage (2019). We hypothesized that companies reformulated products to adapt to the new regulation, reducing energy and the content of nutrients of concern.

We conducted a descriptive, observational study that analyzed food nutritional labeling information from the most consumed packaged foods in Chile. Data collection was performed in two periods, in October–November 2013, before Law 20.606 was implemented and in July–September 2019, after the last stage. We selected 70% of the most consumed packaged foods in Chile, identified in the 24 h recall database (total sample of 4920 interviews and 844 foods) of the National Food Consumption Survey (2009–2010) (ENCA) [18].
Data collection was carried out in the biggest supermarket chain in Santiago, Chile, after a formal agreement was reached between the Chilean National Association of Supermarkets (ASACH) and the Universidad del Desarrollo (UDD). A set of pictures of all sides of the selected foods packages was taken by trained fieldworkers with a high-resolution camera (EOS Rebel T100, Canon®, Santiago, Chile). In 2013, pictures of ~650 products (~3000 pictures) were taken. After picture quality was evaluated (sharpness of pictures), ~500 pictures from ~100 products were excluded from this database.
In 2019, the food list database and pictures from 2013 were recovered (551 products, ~2500 pictures) and used as a baseline database for data collection. First, all products were searched in the same supermarket chain; the ones not found were searched in other supermarkets chains or local markets. In sum, 13.6% of the products were not founded in Santiago in 2019. The total sample and product losses in the period are described in Table 1.
The pictures database (2013–2019) was built and managed using REDCap (Research Electronic Data Capture), hosted by UDD. All nutritional labeling information, product name, brand, manufacturer, and ingredients were registered by trained personnel.

To analyze the energy and nutrients of concern (total sugars, saturated fats, sodium) declaration, the limits for nutrient profiles from the final stage of the Chilean Food Law were considered [8].
When nutrient content per 100 g is greater than or equal to the established limit, the FoP “high in” warning label is applied to packaged foods. The limits established for solid foods per 100 g are: 275 calories; 10 g total sugar; 4 g saturated fat; and 400 mg sodium. For liquid foods, the limits established per 100 mL are: 70 calories; 5 g total sugar; 3 g saturated fat; and 100 mg sodium. To simulate the presence/absence of FoP (2013 and 2019), following the law guidelines [8], only products with nutrients of concern added were included in the analysis. This process was conducted by a trained professional that identified the possibility of containing added sugar, sodium or saturated fats or other caloric nutrient based on the type of product and the ingredients listed on each food package.

Numeric variables (energy, sugar, saturated fat, and sodium content) were presented as median and interquartile rank, considering that they had a non-parametric distribution according to the Shapiro-Wilk test. The comparison of the magnitude of the differences in nutritional labeling information (2013–2019) for these nutrients was evaluated using the non-parametric paired Wilcoxon signed-rank test.
The simulated FoP “high in” warning labels were presented in absolute numbers, proportions, and 95% confidence interval according to food groups, type of product (solid or liquid) and year. The difference in warning label proportion for each food group during the studied period was analyzed by Chi-Square or Fisher’s Exact Test (when more than 20% of the observations had n < 5).
The level of statistical significance considered for all analyses was p < 0.05. Stata 16.1 software (Texas, USA) was used.

All food groups had some changes in energy and nutrients of concern declarations during the study period. Table 2 describes the nutritional labeling of solid foods. All food groups had a reduction in the energy level and significant changes were observed in three groups (flour-based foods, confitures and similar, fats and oils). The confitures and similar group had the highest median reduction, with almost 50.0%. For total sugar, significant reductions were observed in dairy, confitures and similar and the cereals group, with −62.5%, −60.0% and −21.7%, respectively (p < 0.05). Saturated fat did not show significant changes in the period. Sodium content was significantly reduced in three groups, −40.8% and −37.5% for fats and oils and spices, condiments, and sauces groups, respectively. Dairy and meat and derivatives groups had an increase of 4.2% and 13.0% (p < 0.05).
Table 3 presents data for liquid products. A reduction in energy was observed for the dairy and sugary beverage groups, −17.2% and −52.2%, respectively (p < 0.01). Moreover, in dairy and sugary beverages a considerable reduction in total sugar was also observed (−50.0%; −63.6%, respectively, p < 0.01). Saturated fat content did not have any significant changes in the food groups. Finally, sodium content presented a minor reduction in the dairy group and a 40.0% increase in the desserts and ice creams group, but these changes were below the limits established in the food law (100 mg/100 mL) (p < 0.05).

We conclude that the Chilean Food Labeling and Advertising Law had an impact in the market and in the nutritional content of packaged foods. A great percentage of foods “high in” total sugar, saturated fat, sodium, and energy were withdrawn from the market. Also, a considerable number of products were reformulated, especially in the dairy (liquid), solid fats, sugary drinks, and flour-based food groups. The natural impact of this reformulation is the reduction in the expected number of products with a FoP “high in” label, which are exempt from the sales and advertising restrictions indicated by the law. It is important to mention that sugary beverages had a strong reduction in energy and total sugar content. This result may relate to the convergence of two recent regulations: the increase in taxation on sugary drinks (2014) and Law 20.606 (2016). It is necessary to continue developing public policies to protect and improve healthy food environments.

This research was funded by an internal grant from the Universidad del Desarrollo, 2018–2019. 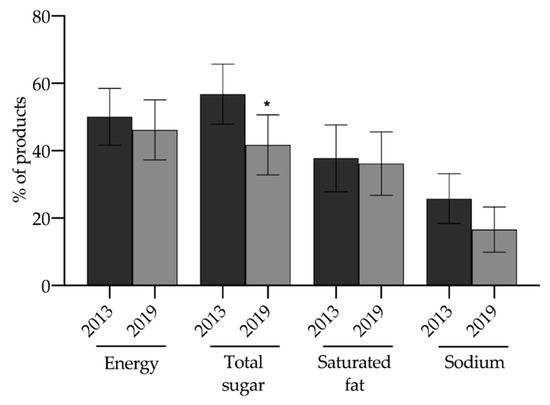 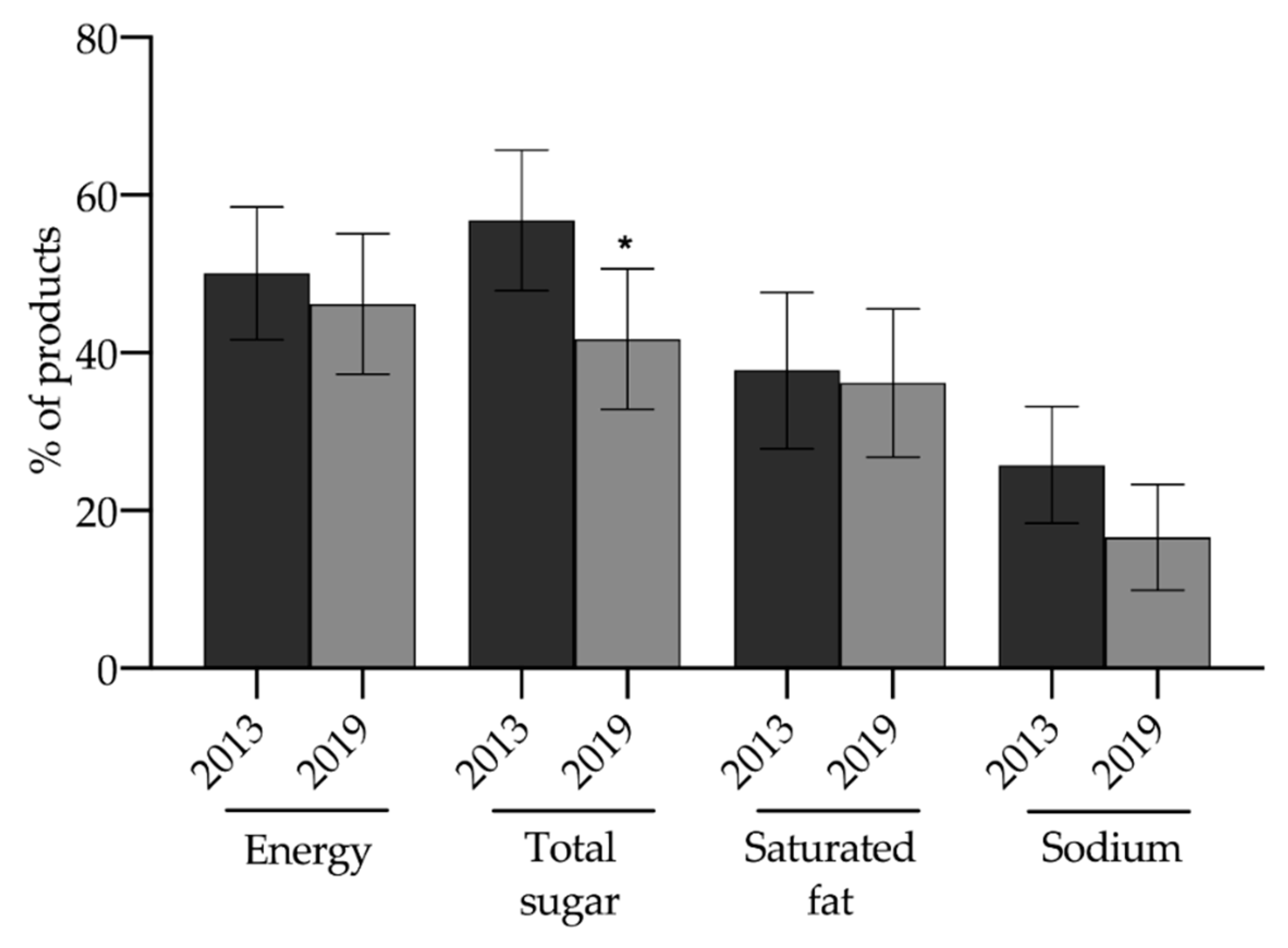