Diet is a factor which can influence both glycaemic variables and body mass. The aim of this study was to compare the influence of a 12-week, well-planned, low-calorie ketogenic diet (LCKD) on hyperglycaemic, hyperinsulinemic and lipid profile in adult, overweight or obese females. Ninety-one females who participated in the study were divided into two groups: a LCKD group who followed a hypocaloric ketogenic diet (8% of carbohydrate, 72% of fat and 20% of proteins) (n = 46), and a control group (CG) (n = 45) who continued their typical diet (50% of carbohydrates, 32% of fat and 18% of proteins). Methods: Baseline and post-intervention glucose (Gl), insulin (I), glycated haemoglobin (HbA1c), Homeostatic model assessment HOMA-IR, triglycerides (TG) and high-density cholesterol (HDL-C) were evaluated. Also, body mass (BM), waist circumference (WC), hip circumference (HC) and thigh circumference (TC) were measured. Results: Compared with the CG, there were significant changes observed in the LCKD group regarding all biochemical variables. Also, BM, TC, WC and AC changed significantly in the LCKD group compared with the CG. Conclusions: The 12-week LCKD intervention changed the glucose control variables, body mass, as well as waist, hip and thigh circumferences. A low-calorie ketogenic diet may be recommended for adult females with glucose control variables disturbance and excess body mass. View Full-Text
Keywords: low-calorie ketogenic diet (LCKD), adult; hyperglycaemia; hyperinsulinemia; IR; HDL-C low-calorie ketogenic diet (LCKD), adult; hyperglycaemia; hyperinsulinemia; IR; HDL-C
►▼ Show Figures 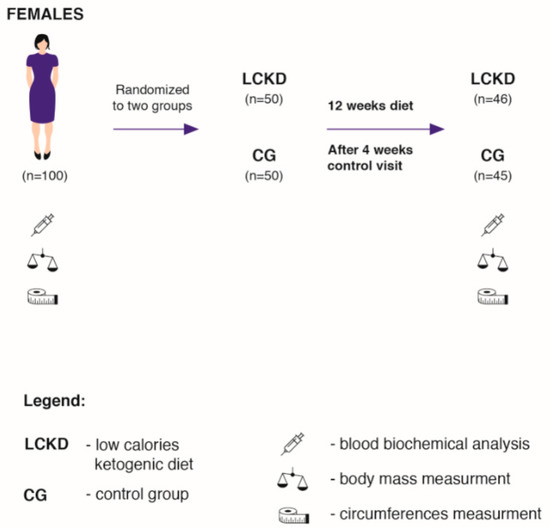