The Central Role of Iron in Human Nutrition: From Folk to Contemporary Medicine
Next Article in Special Issue

Antidiabetic Effects of Flavan-3-ols and Their Microbial Metabolites

According to a World Health Organisation report, cardiovascular diseases accounted for an estimated 31% of deaths globally with majority being a result of stroke or heart attack [1,2]. In clinical settings, treatment involves blunting the activity of platelets using antiplatelet drugs. These drugs interfere with the thrombotic pathophysiology—wherein a rupture of an atherosclerotic plaque triggers platelet hyper-activation resulting in unwanted clot formation and occlusion of the blood vessel. Macrovesicles referred to as platelet microparticles (PMPs) are released following platelet activation and can contribute to the thrombotic situation [3,4].
The several signalling pathways involved in platelet activation and thrombus formation include receptor-agonist pathways such as P2Y1/P2Y12-ADP, GPVI-collagen, PAR1-thrombin and the COX-1-thromboxane [5]. An agonist such as collagen when exposed by atherosclerotic plaque may activate nearby platelets by binding to their GPVI receptor resulting in complex intracellular signalling that produce a conformational change (indicated by GPIIb/IIIa receptor expression), degranulation (indicated by P-selectin secretion) and subsequent formation of platelet aggregates [5]. In addition, PMP released upon activation possess adhesive and pro-coagulant platelet-derived receptors that further enhance thrombus formation, thereby acting as biomarkers of platelet activation [3]. The common antiplatelet agents, clopidogrel and aspirin, used in clinical treatments inhibit platelet activation and its circulating biomarkers by selectively targeting P2Y1/P2Y12-ADP and COX-1-thromboxane respectively [6]. Unfortunately, because of the unresponsiveness and side effects associated with administration there have been considerable research in dietary bioactive agents known as polyphenols [7].
One such example of a polyphenol-rich functional food is sorghum whole grain. Although mainly used as animal feed, studies have demonstrated that it possesses anti-inflammatory, anti-cancer and antioxidant properties which add value to it as a food for human consumption [8]. Sorghum of different types exist that are classified based on the pigmentation of the pericarp and vary in their phenolic content [9]. The polyphenols found in sorghum that contribute to its bioactivity include flavonoids, hydroxybenzoic acids and hydroxycinnamic acid [8]. Furthermore Francis et al. [10] recently demonstrated that black sorghum rich in catechins and their derivatives may confer cardioprotective properties. The treatment of human umbilical vein cells with flavonoid-rich extract was found to prevent oxidative stress-related endothelial dysfunction through the modulation of gene expression.
Furthermore, these cardio-protective benefits of polyphenols apply in the context of platelet function. Several studies have demonstrated that polyphenols may inhibit platelet activation, adhesion, degranulation and aggregation by targeting specific thrombogenic pathways for example P2Y1/P2Y12-ADP, GPVI-collagen, PAR1-thrombin and the COX-1-thromboxane. As reviewed by Ed Nignpense et al. [11] many of the studies that investigate the polyphenol impact on platelet function and PMP generation utilise aggregometry and flow cytometry. However there is limited research on sorghum-derived polyphenols in modulating biomarkers of platelet activation. This study aims to investigate the impact of black sorghum derived polyphenol extracts on collagen-induced platelet aggregation, ADP-induced platelet activation and PMP generation.

The study protocol was approved by the Charles Sturt University Human Research Ethics Committee (HR17012) and the Institutional Biosafety Committee (19HB02). The study was performed in compliance with relevant laws and institutional guidelines.

Eighteen healthy volunteers between 18–65 years of age (9 males and 9 females) were recruited from Charles Sturt University and the local community. Informed consent was obtained from all participants prior to commencement of the study. The criteria for recruitment involved normal health status with no history of conditions such as cardiovascular, metabolic, liver or lung disease. Other parameters that could affect the integrity of the analysis such as alcohol consumption, smoking, pregnancy, allergies or venepuncture difficulty were considered during the recruitment process. A health screening questionnaire was used to assess the already mentioned parameters. A dietary questionnaire (adapted from WINTEC and NZ academy of sport) was used to assess the usual dietary intake of volunteers and to avoid recruitment of participants on a high antioxidant diet. The cut-off figure for each type of food listed in the questionnaire was based on nutrient reference ranges for Australia and New Zealand—recommended daily nutrient intake values.

After fasting for at least 8 h, whole blood was collected from each participant by a trained phlebotomist into a tri-potassium ethylene diamine tetra-acetic acid (EDTA-1.8 mg/mL concentration) anticoagulant tube (Vacuette Greiner Bio-one, Interpath Services, Heidelberg West, VIC, Australia) and a tri-sodium citrate (28.12 g/L concentration) anticoagulant tube (Becton, Dickson and Company, North Ryde, NSW, Australia). A 20-mL syringe (Becton, Dickson and Company, North Ryde, NSW, Australia) and 21-gauge 1.5-inch needle (Terumo Medical Corporation, Macquarie Park, Australia) were used to draw blood from the median cubital vein. The purpose of choosing a larger gauge was to avoid the activation of platelets while drawing or dispensing blood. Utmost care was taken to ensure samples were not obtained through a traumatic collection and that none contained obvious clots. In addition, care was taken to ensure minimal specimen handling and agitation in order to prevent artefactual platelet activation. The first 2 mL of blood was discarded before drawing into the tri-sodium citrate tubes in order to avoid the risk of collecting platelets activated by venepuncture. Tri-sodium tubes were used for aggregometry and flow cytometry assays whereas the EDTA was used to perform full blood examinations.

Using an Abbott CELL-DYN Emerald 22 Haematology Analyser (Abbott Diagnostics, Illinois, USA), a full blood examination (FBE) was performed on all samples. The FBE results of volunteers indicated that the blood cell parameters were within normal reference ranges as determined by the Royal College of pathologists of Australia. Individuals with cell counts, especially platelet counts, outside of the reference range were excluded from the study. Quality control validation and maintenance were all performed according to the Abbott CELL-DYN Emerald 22 Haematology Analyser manual.

The effects of BSE on ADP-induced platelet activation were analysed and interpreted using a Gallios flow cytometer (Beckman Coulter, Inc., Lane Cove NSW, Australia). The protocols were adopted from the method described by Santhakumar et al. [12] with some modifications. Platelet activation and thrombogenic indicators were assessed via activation-dependent platelet monoclonal antibodies (mAbs) purchased from Becton, Dickinson and Company, North Ryde, NSW, Australia. Procaspase activating compound-1 (PAC-1)-fluorescein isothiocyanate-fluorescein isothiocyanate was used to detect platelet activation-related conformational change and P-selectin/CD62P-allophycocyanin highlighted activation dependent degranulation. CD42b-phycoerythrin identified the GPIb-IX-V receptor, a common receptor found on the surface of all platelets, activated and resting included. A decreased expression of mAb exhibits alleviation of thrombogenesis. Within 5 min of collection tri-sodium citrated whole blood was used for assay preparation to avoid artefactual activation of platelets. A volume of 40 μL of blood was incubated with DMSO control or the various BSE concentration for 20 min at 37 °C in the dark. A 10-μL mixture of all three monoclonal antibodies (3.33 μL each of PAC-1, CD62P and CD42b) was added to blood samples and incubated for 20 min at room temperature in the dark. To induce platelet activation, 10 μM ADP (Helena laboratories Pty. Ltd., Mt Waverly, VIC, Australia) was added, and samples were incubated for a further 15 min in the dark at room temperature, after which erythrocytes were lysed (575 μL of 10 % lysing solution). Samples were thoroughly vortexed to ensure homogeneity and incubated in the dark at room temperature for a further 15 min and then analysed. In all, 10,000 platelet events were acquired, gated based on light scatter and CD42b mAb expression and activated platelets were articulated as mean fluorescence intensity (MFI) (Supplementary Figure S3).

Using the microparticle gating established with Megamix beads, PMPs were identified and quantified by size distribution and binding to CD42b (Supplementary Figure S4). The protocol for circulatory PMP analysis was adapted from Lu et al. [13]. A volume of 1 mL whole blood was added to micro-centrifuge tubes in the presence of PGE1 (120 nmol/L; Sigma-Aldrich, Castle Hill, NSW, Australia). PGE1 was added to prevent artefactual activation during centrifugation. The blood samples were incubated with the respective 100 μL BSE concentrations and DMSO control for 20 min at 37 °C in the dark. Each sample was then centrifuged for 15 min at a 1000 rpm and the resultant platelet rich plasma (PRP) was discarded. The remaining blood was spun a further 15 min at 3000 rpm. The supernatant rich in PMPs (40 μL) was collected into flow tubes and incubated with 4 μL of CD42b and 6 μL of stain buffer (Becton, Dickson and Company, North Ryde, NSW, Australia) in dark room for 15 min. Four percent formaldehyde was used to fix any activation of platelets left in the supernatant. After a 10-min incubation period the samples were run for PMP analysis on the flow cytometer.

A two-way ANOVA following Tukey’s post comparison test was performed using GraphPad Prism version 8.0 for Windows (GraphPad Software, La Jolla, California, USA). A minimum sample size of 14 participants in total was required for 80% power to detect a 5% variation in the laboratory parameters measured where a 3–5% standard deviation exists in the population, assuming an alpha error of 0.05. All the data were expressed as mean ± standard deviation (SD). Differences between the groups were significant when p < 0.05. Any significant statistical interactions were included in the analysis where applicable.

The baseline parameters including full blood counts for all 18 participants were within normal reference ranges set by the Royal College of Pathologists of Australasia (Table 1) [14].

3.2. Effect of BSE on Circulatory PMPs

In summary, the present study contributes to the growing body of literature on bioactivity of sorghum polyphenols and highlights possible mechanisms of antiplatelet action that may result in cardiovascular health benefits. Because of the ability to reduce collagen-induced platelet activation and circulatory PMP generation, BSE polyphenols demonstrate the potential to interfere with pathological processes involved in vascular disorders and thrombotic complications. However, a larger panel of agonist for the flow cytometry and aggregometry studies will aid to further elucidate antiplatelet mechanisms. Because of the bioavailability concerns, well-controlled dietary intervention trials using larger sample sizes to evaluate the antiplatelet effects of sorghum consumption in healthy and pro-thrombotic populations are warranted to justify our findings. Because of the varied phenolic profiles of the different sorghum varieties, further research comparing the antiplatelet therapeutic potential of different grains is also warranted. Furthermore, this study attest to the measurement of circulatory PMPs as a biomarker of platelet activation to assess the bioactivity of functional foods. 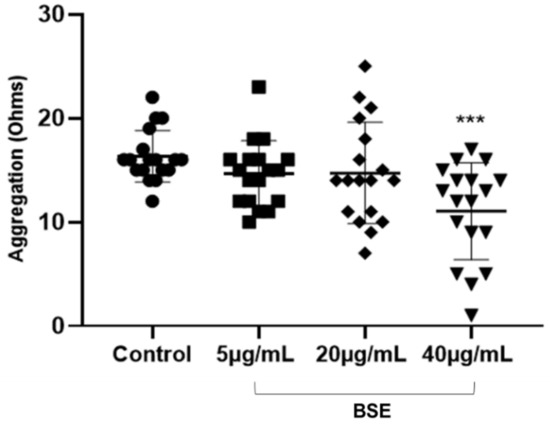