Food Insecurity and COVID-19: Disparities in Early Effects for US Adults
Previous Article in Special Issue

Dietary Factors and Risks of Cardiovascular Diseases: An Umbrella Review

The Effect of Low-Carbohydrate Diet on Macrovascular and Microvascular Endothelial Function Is Not Affected by the Provision of Caloric Restriction in Women with Obesity: A Randomized Study 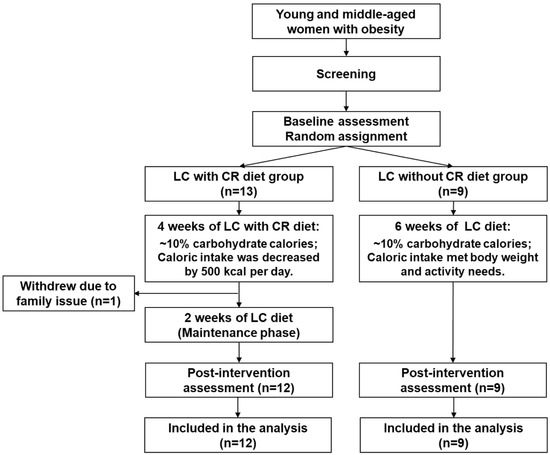 
Hwang C-L, Ranieri C, Szczurek MR, Ellythy AM, Elokda A, Mahmoud AM, Phillips SA. The Effect of Low-Carbohydrate Diet on Macrovascular and Microvascular Endothelial Function Is Not Affected by the Provision of Caloric Restriction in Women with Obesity: A Randomized Study. Nutrients. 2020; 12(6):1649. https://doi.org/10.3390/nu12061649


Hwang, Chueh-Lung, Christine Ranieri, Mary R. Szczurek, Assem M. Ellythy, Ahmed Elokda, Abeer M. Mahmoud, and Shane A. Phillips. 2020. "The Effect of Low-Carbohydrate Diet on Macrovascular and Microvascular Endothelial Function Is Not Affected by the Provision of Caloric Restriction in Women with Obesity: A Randomized Study" Nutrients 12, no. 6: 1649. https://doi.org/10.3390/nu12061649