Reliable Measures of Sarcopenia in Cirrhosis. Comment on: “The Relationship of Obesity, Nutritional Status and Muscle Wasting in Patients Assessed for Liver Transplantation, Nutrients 2019, 11, 2097”
Previous Article in Journal

Queuine is a eukaryotic micronutrient, derived exclusively from eubacteria. It is incorporated into both cytosolic and mitochondrial transfer RNA to generate a queuosine nucleotide at position 34 of the anticodon loop. The transfer RNA of primary tumors has been shown to be hypomodified with respect to queuosine, with decreased levels correlating with disease progression and poor patient survival. Here, we assess the impact of queuine deficiency on mitochondrial bioenergetics and substrate metabolism in HeLa cells. Queuine depletion is shown to promote a Warburg type metabolism, characterized by increased aerobic glycolysis and glutaminolysis, concomitant with increased ammonia and lactate production and elevated levels of lactate dehydrogenase activity but in the absence of significant changes to proliferation. In intact cells, queuine deficiency caused an increased rate of mitochondrial proton leak and a decreased rate of ATP synthesis, correlating with an observed reduction in cellular ATP levels. Data from permeabilized cells demonstrated that the activity of individual complexes of the mitochondrial electron transport chain were not affected by the micronutrient. Notably, in queuine free cells that had been adapted to grow in galactose medium, the re-introduction of glucose permitted the mitochondrial F1FO-ATP synthase to operate in the reverse direction, acting to hyperpolarize the mitochondrial membrane potential; a commonly observed but poorly understood cancer trait. Together, our data suggest that queuosine hypomodification is a deliberate and advantageous adaptation of cancer cells to facilitate the metabolic switch between oxidative phosphorylation and aerobic glycolysis. View Full-Text
Keywords: Queuine; queuosine; micronutrient; microbiome; Warburg metabolism; aerobic glycolysis; RNA modification Queuine; queuosine; micronutrient; microbiome; Warburg metabolism; aerobic glycolysis; RNA modification
►▼ Show Figures 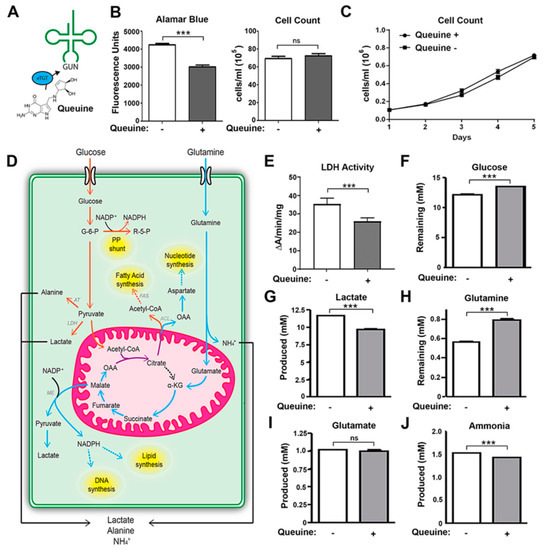