We used G*Power [29] and ran a series of simulations using R statistical software to determine the sample size needed to be able conduct our least sensitive statistical tests at a power of 80% (α = 0.05, two-tailed). These analyses revealed that we would need a sample size of 191 participants (effect size = 0.3, significance level = 0.05, power = 0.95). We have assumed an attrition/unusable data rate of 20% over the study period (N = 268). Finally, the sample was composed of 370 participants: 188 participants following a vegetarian diet (Mage = 28.87 ± 10.32; MBMI = 21.72 ± 3.24) and 182 participants following an omnivorous diet (Mage = 27.05 ± 8.87; MBMI = 23.07 ± 4.98).
Data of samples were collected via online survey (SurveyMonkey). Participants were randomly selected. The notice about the research was distributed among various Silesian (Poland) institutions (vegetarian restaurants, vegan and vegetarian associations, organic grocery stores, fitness centers, dance studios, sports clubs, universities, companies) and vegetarian social networking. The announcement included a link to study information, consent procedures (anonymous and voluntary nature of participation, freedom to refuse or withdraw without penalties) and the questionnaires. Informed consent was obtained from all participants (via an online consent form). At any time and for any reason, they could refuse to answer a question or stop filling out the questionnaire and not send their data using the ‘send’ button.
Vegetarian diet was assessed through self-report. However, it is noted that individuals following a vegetarian diet were selected through predefined objective criteria (participants had to answer several questions regarding their eating behaviors and had to follow a vegetarian diet for at least 12 months). Furthermore, participants were asked to identify themselves as vegetarian (a “yes/no” item). The reason participants were excluded due to “consistency of self-defined types of diet and objective criteria” was following: discrepancy between self-description of the diet and self-identification as one of the following: vegetarian or vegan (e.g., those who described themselves as vegetarians and declared to often eat fish were eliminated). The procedure was based on the Barthel et al. [17] criteria (vegetarianism: exclusion of meat from the diet) and described in our latest publication [20].
The touch pen (worth approximately €6.00) was compensation for participation in the research. The study protocol has received the approval of a research ethics committee (no. WKEB45/03/2017). In addition, all procedures performed in this study were in accordance with the 1964 Helsinki declaration and its later amendments or comparable ethical standards. The research project was funded by the National Science Centre (NCN), Poland (Grant no. 2017/01/X/HS6/00007). The current study is part of a large project focusing on the assessment of rumination and eating behaviors in daily life among individuals with differential food preferences.

All participants were questioned about their age, height and weight (to calculate their body mass index) as well as their eating habits.

The TFEQ-R18 [30] assesses three different aspects of eating behaviors: cognitive restraint (conscious restriction of food intake in order to control body weight or to promote weight loss; e.g., “I consciously hold back at meals in order not to gain weight”), emotional eating (inability to resist emotional cues; e.g., “When I feel anxious, I find myself eating”) and uncontrolled eating (tendency to eat more than usual due to a loss of control over intake accompanied by subjective feelings of hunger; e.g., “When I see a real delicacy, I often get so hungry that I have to eat right away”). In the present study, we used the Polish version of the TFEQ-R18 [28] which has demonstrated satisfactory levels of internal reliability (α = 0.78 for cognitive restraint, α = 0.84 for uncontrolled eating and α = 0.86 for emotional eating). In the present study, we only used cognitive restraint scale (its Cronbach’s α values was 0.77).

The Eating Habits Questionnaire [31] assesses cognitions (knowledge of healthy eating; “I prepare food in the most healthful way”), behaviors (problems associated with healthy eating; e.g., “I turn down social offers that involve eating unhealthy food”) and feelings (feeling positively about healthy eating; e.g., “Eating the way I do gives me a sense of satisfaction”) related to an extreme focus on healthy eating, which has been called orthorexia nervosa. The EHQ displayed good internal consistency and test-retest reliability in a college student sample [31]. The exploratory and confirmatory factor analyses support and shed further light on the construct validity of the tests. In the present study, the Cronbach’s α values of the three subscales were: 0.81 for knowledge of healthy eating, 0.82 for problems associated with healthy eating and 0.70 for feeling positively about healthy eating.

All analyses were carried out using the Statistical Package for Social Sciences (version 22.0 with AMOS; IBM®, Armonk, NY, U.S.A.). Descriptive findings for continuous data were reported using means and standard deviations which were determined using an independent sample t-test. Structural equation modeling (SEM) was performed to examine the structural relationship between type of diet (vegetarian versus omnivorous), unhealthy eating patterns (cognitive restraint as well as cognitions, behaviors and feelings related to orthorexia nervosa) and body mass index in adults. In the first step of the SEM, the assessment of normality (multivariate normal distribution) was performed. The asymptotically distribution-free (ADF) method was used because the critical ratio (CR) [−2, 2] and skew/kurtosis [−1, 1] for all variables did not fit in the adequate range [32]. In this work to evaluate the goodness-of-fit of a model the root mean square error of approximation (RMSEA) statistic and the comparative fit index (CFI) were used as these are the most commonly used indices [32]. The RMSEA estimates the lack of fit in a model compared to a saturated model. Values of RMSEA of 0.06 or less indicate a good-fitting model and a value larger than 0.10 is indicative of a poor model [32]. While, the comparative fit index (CFI) assesses fit relative to other models. CFI values greater than 0.90 indicate reasonably good fit of the model [32]. All statistics indicate that the goodness of fit is appropriate (Table 1).

3.2. Characteristics of the Study Population

3.3. Comparison between Participants Following a Vegetarian Versus Omnivorous Diet: An Independent Sample t-Test

My grateful thanks are extended to members of EAT Lab for their help in conducting research.

The author declares no conflict of interest. The founding sponsors had no role in the design of the study; in the collection, analyses, or interpretation of data; in the writing of the manuscript, and in the decision to publish the results. 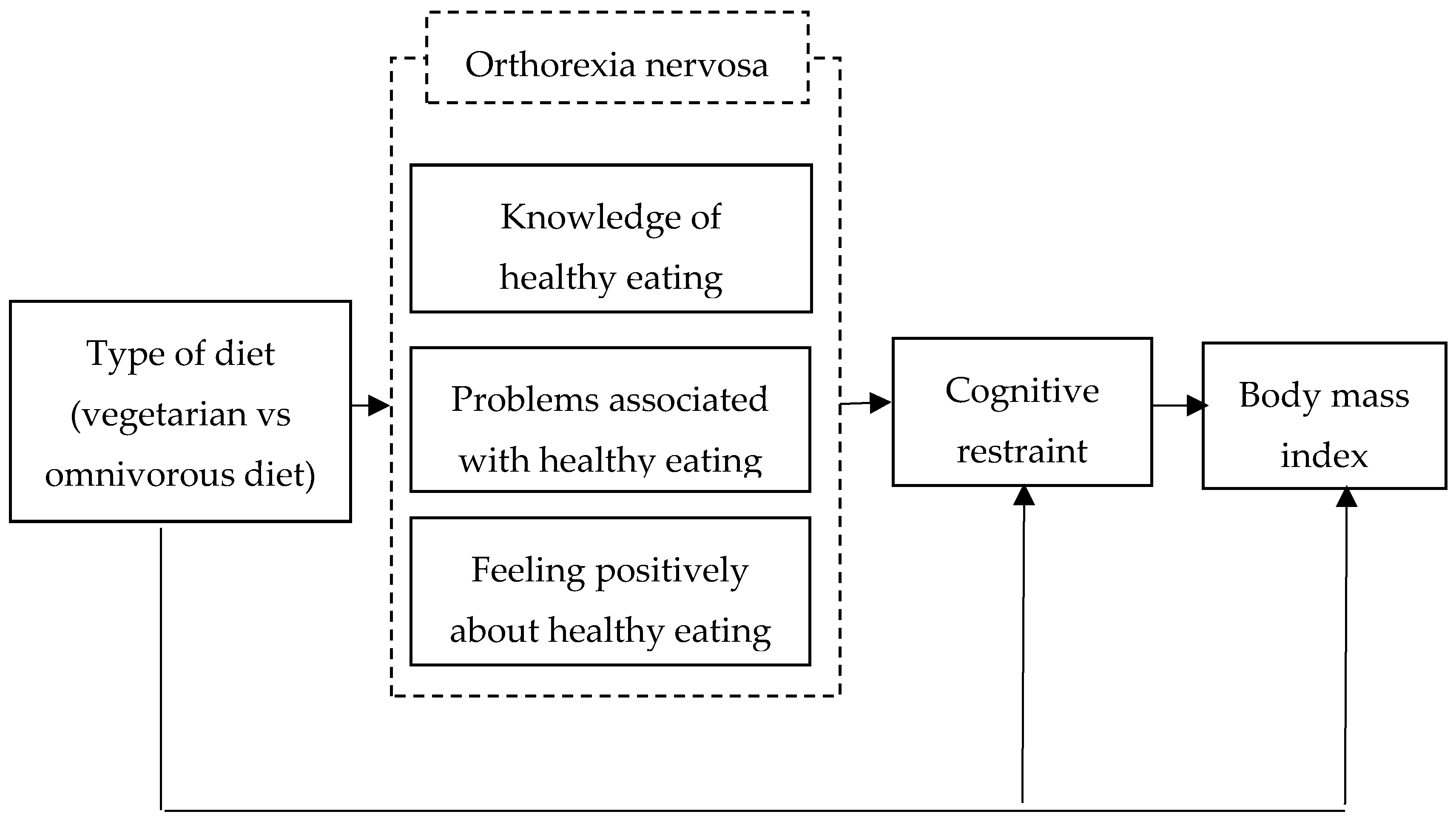 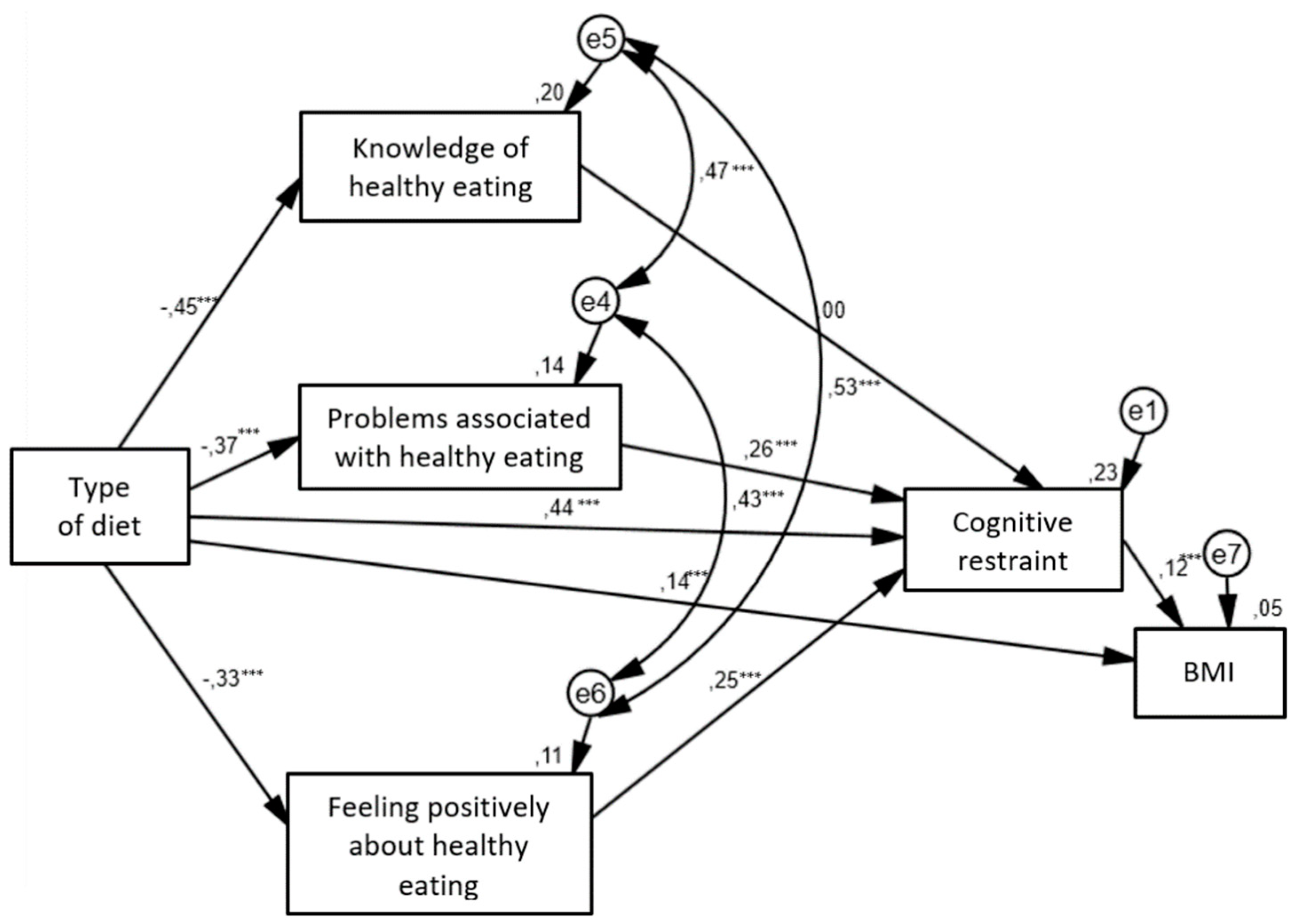