Effects of Lutein and Astaxanthin Intake on the Improvement of Cognitive Functions among Healthy Adults: A Systematic Review of Randomized Controlled Trials

Background: Fruits and vegetables are generally rich in antioxidants such as carotenoids. Consumption of carotenoids is expected to have benefits on cognitive functions in humans. However, previous randomized controlled trials (RCT) using carotenoids have reported inconsistent results. Therefore, this systematic review (SR) aimed to summarize the effect of carotenoid intake on cognitive functions in humans. Method: PubMed, Cochrane Library, Web of Science, and PsychoINFO were searched for research papers on carotenoid intake with the criteria that 1) oral carotenoid intake was evaluated using RCTs, 2) participants were healthy young, middle-aged, or older, and 3) cognitive functions were measured using RCTs. Results: Five studies using lutein and two studies using astaxanthin met the inclusion criteria. Consumption of lutein and its isomer showed consistent results in selective improvement of visual episodic memory in young and middle-aged adults while inhibition was observed in middle-aged and older adults. One of the two included astaxanthin studies reported a significant improvement of verbal episodic memory performance in middle-aged adults. Conclusion: This SR showed that the 10 mg lutein per day for twelve months can lead to improvement of cognitive functions. Due to the small number of studies, it is difficult to conclude whether astaxanthin would have a positive effect on cognitive functions. View Full-Text
Keywords: lutein; carotenoids; astaxanthin; intervention; episodic memory; inhibition lutein; carotenoids; astaxanthin; intervention; episodic memory; inhibition
►▼ Show Figures 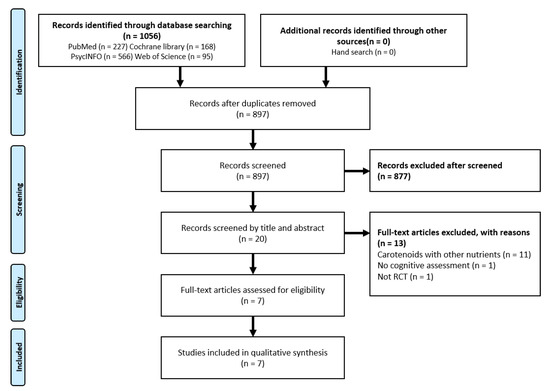