Soda consumption in adolescents has been linked to poorer metabolic outcomes. We tested whether replacing soda with reduced fat milk would improve features of atherogenic dyslipidemia and other cardiometabolic risk factors. Thirty overweight and obese adolescent boys who were habitual consumers of sugar-sweetened beverages were randomly assigned to consume 24 oz/day of sugar-sweetened soda or an energy equivalent of reduced fat (2%) milk for 3 weeks with crossover to the alternate beverage after a ≥ 2 weeks washout. Plasma lipids and lipoproteins and other laboratory measures were assessed after each beverage period. Lipid and lipoprotein measurements, C-reactive protein, and serum transaminases did not differ significantly between the soda and milk phases of the study. Systolic blood pressure z-score and uric acid concentration were significantly lower after consuming milk compared to soda. Milk consumption also significantly decreased plasma glucosyl ceramide (d18:1/C16:0) and lactosylceramides (d18:1/C16:0 and d18:1/C18:0). While no effects of replacing soda with milk on lipid and lipoprotein measurements were observed in these normolipidemic weight-stable adolescent boys, decreases in systolic blood pressure, uric acid, and glycosphingolipids suggest that an overall favorable effect on cardiometabolic risk can be achieved following a short-term dietary intervention. View Full-Text
Keywords: obesity; sugar-sweetened beverage; soda; milk; lipid; lipoprotein; blood pressure obesity; sugar-sweetened beverage; soda; milk; lipid; lipoprotein; blood pressure
►▼ Show Figures 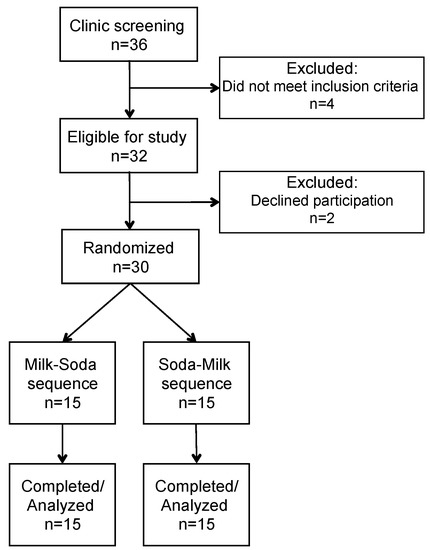