Previous studies have indicated that dialysis patients are predisposed to developing carnitine deficiency associated with skeletal muscle weakness, cardiomyopathy, heart failure, and renal anemia. Furthermore, a randomized controlled trial revealed that carnitine treatment was associated with a significantly improved survival rate among dialysis patients with dilated cardiomyopathy [1]. These relationships may be because carnitine plays an important role in mitochondrial transport and long-chain fatty acid metabolism, contributing to energy production [2]. Dialysis patients may be predisposed to carnitine deficiency because of their protein-restricted diet, decreased l-carnitine production because of renal impairment, and increased carnitine loss during dialysis. Furthermore, dialysis patients typically have low total carnitine (TC) and free carnitine (FC) concentrations, while acylcarnitine (AC) is within the normal range. However, serum carnitine concentrations tend to decrease at longer dialysis duration [3]. In this setting, carnitine deficiency may reduce fatty acids, an energy source, leading to fat accumulation, muscle weakness, cardiomyopathy, heart failure, and anemia (related to erythrocyte membrane weakening) [4]. Carnitine is an amino acid-derived substance present in almost every cell in the body. The name carnitine is derived from the Latin word “carnus,” which means meat because it is a substance contained in meat. Carnitine is a general term for many substances such as l-carnitine, acetyl-l-carnitine, and propionyl-l-carnitine. Healthy children and adults do not need to take daily carnitine from food or supplements because the liver and kidneys synthesize sufficient amounts of the amino acid lysine and methionine [5,6]. The AC/FC ratio is an index used to evaluate carnitine metabolism. AC removal by dialysis is more difficult than FC removal, and patients with renal failure are believed to accumulate AC easily. As a result, even if we administered carnitine to improve the metabolism, the AC/FC level may not change appropriately. It has been reported in the past that the AC/FC level significantly decreased six months after switching to the IV dosing mode [7,8]. Therefore, the present study evaluated whether l-carnitine supplementation may improve muscle spasms, cardiac function, and renal anemia in Japanese dialysis patients.

This prospective study recruited 80 Japanese dialysis patients, including 62 patients who were undergoing hemodialysis (HD) and 18 patients who were undergoing peritoneal dialysis (PD) (Table 1). All patients were treated as outpatients at our hospital for dialysis and provided informed consent before participating in the study. The study protocol was approved by the Ethics Review Committee of Juntendo University Faculty of Medicine, Tokyo, Japan (approval: 12-014, 20 April 2013), and was registered with the University Hospital Medical Information Network (UMIN00007874, UMIN000012390). All study procedures complied with the tenets of the 2000 Declaration of Helsinki.

All 80 patients received oral l-carnitine (600 mg/day; Otsuka Pharmaceutical Co, Ltd. Tokyo, Japan) for 12 months, and then HD patients received l-carnitine injections (1000 mg three times per week) for 12 additional months. Data regarding patient clinical characteristics, serum samples, and the use of erythropoiesis-stimulating agents (ESAs) were obtained at the start of the study and then every 6 months. Cardiac parameters were evaluated using echocardiography and chest radiography at the beginning of the study and the final follow-up. A questionnaire was used to collect data regarding muscle spasms and cramps frequency at the start of the study and then every 6 months.
Blood testing was performed to determine the serum concentrations of TC, FC, and AC by enzyme cycling methods, as described previously [9], hemoglobin (Hb), hematocrit, iron, ferritin, C-reactive protein, brain natriuretic peptide, and atrial natriuretic peptide, and total iron-binding capacity. The echocardiography data were used to determine the left ventricular mass index, ejection fraction, and dilatation abilities of the left ventricle, which included the peak early diastolic left ventricular filling velocity/peak atrial filling velocity ratio, deceleration time, and peak early diastolic left ventricular filling velocity/peak early diastolic mitral annular velocity ratio.

3.2. Effects of l-Carnitine on Muscle Symptoms

We did not observe any significant changes in echocardiography findings, although a small hemoglobin concentration increase in the HD group was observed (Table 2).

Formal analysis, K.W. and R.K.; data curation, S.I.; writing—original draft preparation, M.K.-I. and H.I.; writing—review and editing, M.M., Y.T. and Y.S.; supervision, J.N. and N.N. All authors have read and agreed to the published version of the manuscript.

We are indebted to nephrologists and patients at the Juntendo University Hospital for their collaboration in this study. Some of this work was presented at the 14th Asian Pacific Congress of Nephrology (14–17 May 2014 in Tokyo) and the abstract was published in Nephrology 2014. We would like to thank Editage for English language editing. 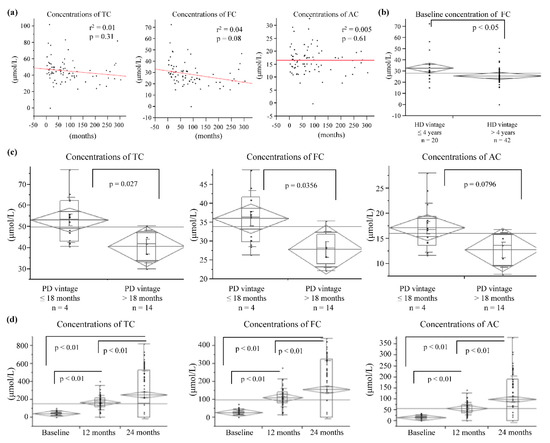 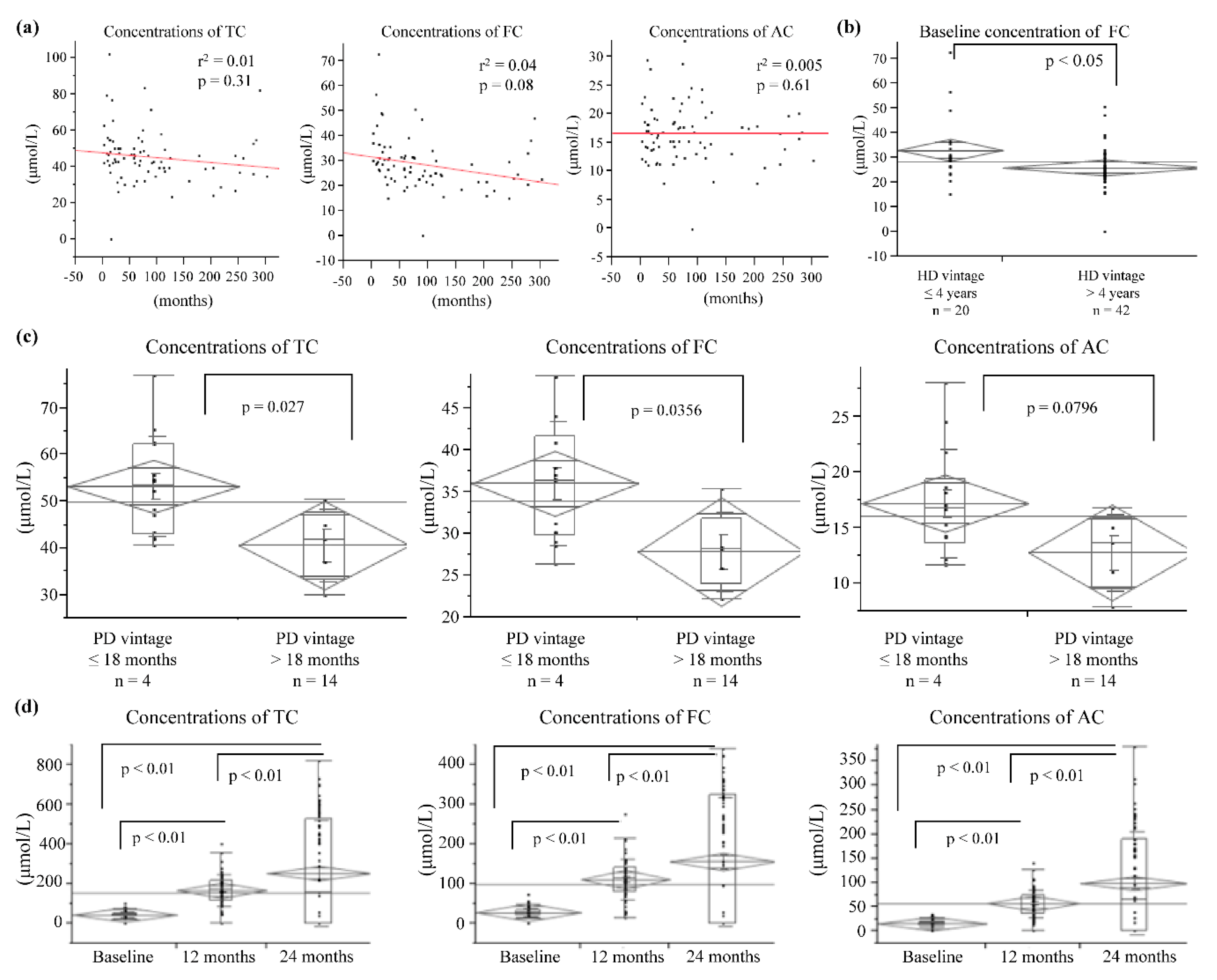 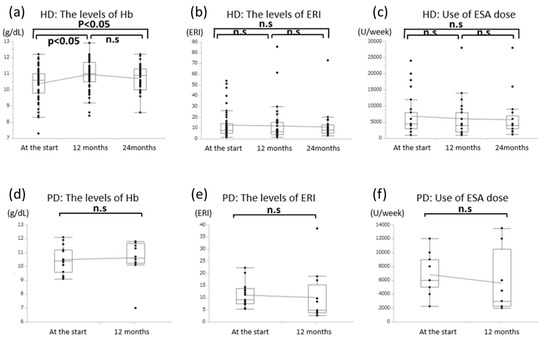 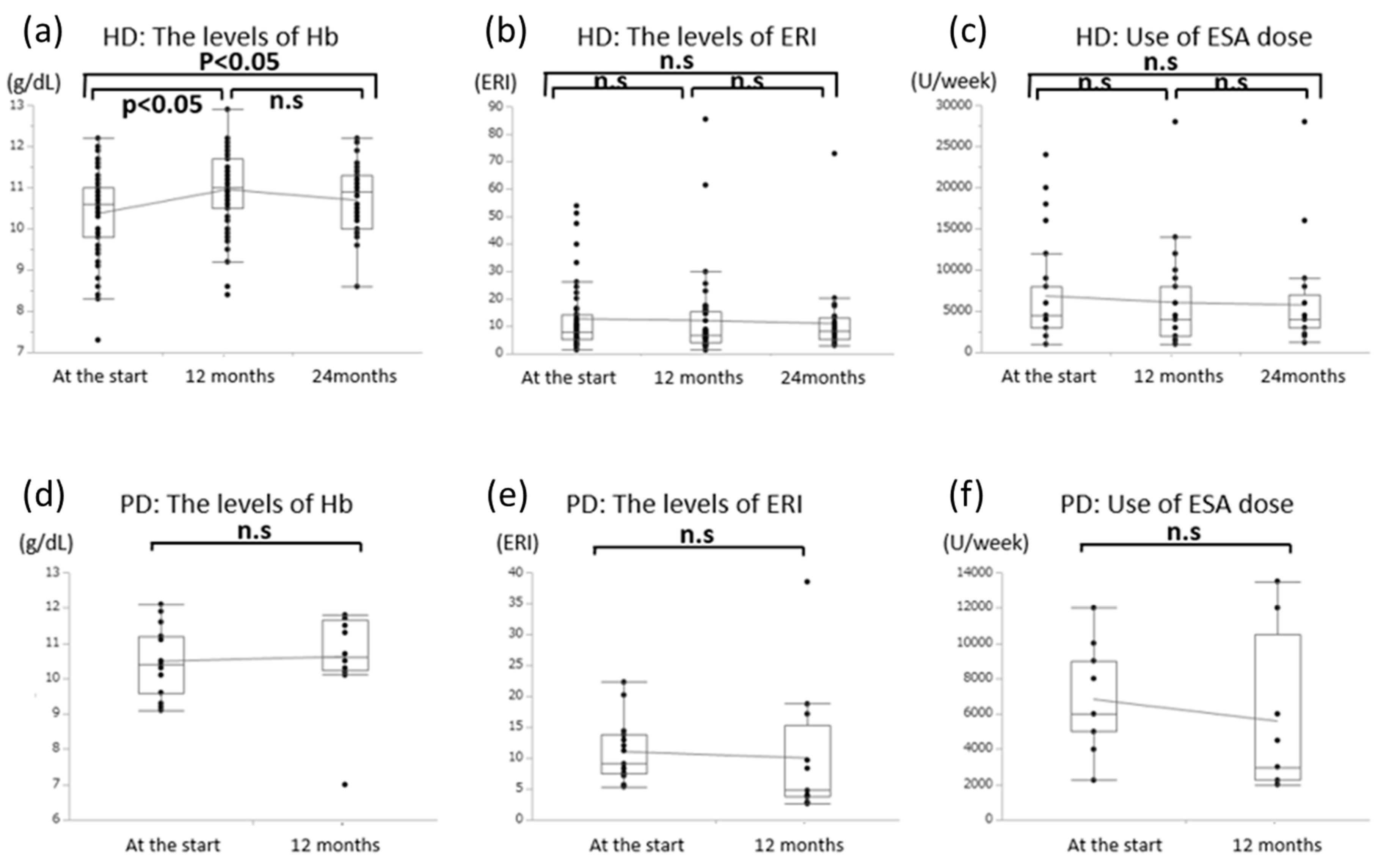 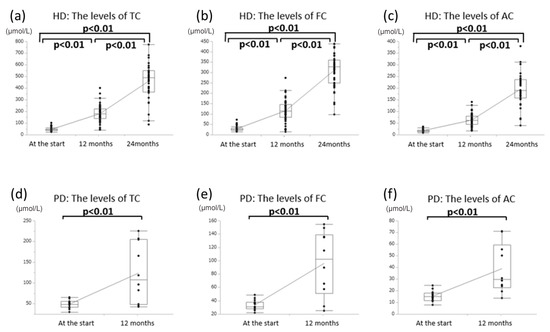