The Influence of Lycopene, [6]-Gingerol, and Silymarin on the Apoptosis on U-118MG Glioblastoma Cells In Vitro Model

Primary brain tumors account for about 2% of all tumors, and the most common are gliomas. Depending on the age of patients, 40–90% turn out to be malignant. Glioblastoma multiforme (GBM) is the most common primary malignant brain tumor, and it is associated with poor prognosis. Despite advances in treatment modalities, it still remains incurable [1,2,3]. Therapies directed against glioma growth factors and their receptors or related to cell metabolisms are currently at the stage of clinical trials. The angiogenesis inhibitors are considered to be promising medication in GBM [2]. Moreover, many research groups are focused on therapeutic agents, which could unblock the mechanisms leading to cancer cells’ self-destruction and to stop their uncontrolled proliferation. The most effective method of tumor cell elimination is induction of apoptosis [4,5,6]. Lifestyle has a major impact on the development of most tumors. About 60% of new cancer cases are caused by smoking cigarettes and improper diet, and it is estimated that about 30–40% of tumors can be prevented only by diet [7]. Protective elements in the antineoplasm diet include selenium, folic acid, vitamin D, antioxidants, lycopene, gingerol, and silymarin [4]. In cancer prevention, great emphasis is placed on the consumption of vegetables and fruits. They contain fiber and antioxidants of particular importance not only in the prevention of cancer, but also in the prevention of cardiovascular disease and type II diabetes [7]. The combination of oncological therapy and dietotherapy may have an impact on the well-being and comfort of patients. In the oncological treatment process, dietotherapy is based on the assessment of the patient’s nutritional status, cancer location, and progress [5]. Therefore, effective methods for the prevention and treatment of glioblastoma multiforme should be developed. Tomatoes and their products are an important source of antioxidants, such as phenolic compounds, as well as carotenoids, including lycopene. Important components of tomato are vitamins, especially rich in water soluble vitamin C, thiamine, niacin, riboflavin, pantothenic acid, folic acid, and biotin [6]. Lycopene is a polyunsaturated chain fat-soluble compound derived, inter alia, red pigment produced by plants and some microorganisms. It belongs to the class of organic compounds known as carotens (water solubility at 0.0004 g/L). Depending on the variety, tomatoes may contain from 3.1–7.74 mg/100 g of lycopene; however, the largest amount can be found in tomato concentrates 38.0–49.3 mg/100 g [8]. The health-promoting properties of lycopene are mainly related to its strong antioxidant properties and epigenetic regulation of gene expression. This aroused interest in tomato as a food with potential anticancer properties. There is a correlation between the regular consumption of fresh tomatoes and their products, and a reduction in the incidence of various types of cancer [9,10,11]. Medical ginger has a number of applications and properties; the most well-known action is improving symptoms of dyspepsia, such as indigestion, nausea, and even unresponsive vomiting of pregnant women. Ginger also has a tradition in Indian and China medicine; it was used as an anti-inflammatory agent for musculoskeletal diseases [12].
It contains phenolic substances, aromatic ketones known as gingerols, which are thought to be the most pharmacologically active components [13]. Moreover, [6]-Gingerol (1-4′-hydroxy-3′-methyloxyphenyl-5-hydroxy-3-decanone), which belongs to polyphenols (water solubility at 0.08g/L (80 mg/dm3)), is one of the major ingredients of ginger, and it represents several mechanisms of action, such as an antipyretic and analgesic effects mediated by inhibition ofprostaglandin and leukotrienes biosynthesis, platelet aggregation. In an in vivo study, ginger oil at a single oral dose of 33 mg/kg supressed severe chronic adjuvant arthritis in rats [14]. Through the induction of apoptosis, gingerol has been shown to exhibit anticancer activities. Due to its strong anti-inflammatory effect, it is considered to be associated with its cancer chemopreventive potential [14]. Silymarin is a polyphenolic flavonoid isolated from milk thistle, composed mainly of flavonolignans: silibinin, isosilybin, dihydrosilybin, silydianin, and silychristin. It is soluble in water at 77.36 mg/L. Similarly to lycopene and gingerol, silymarin are strong antioxidants, so they are able to scavenge both free radicals and reactive oxygen species, which results in enhancement of cellular antioxidant defense machinery [15,16,17].
Some pharmacological study revealed that silymarin is nontoxic even in the highest doses; therefore, it is safe for treating various diseases [18].
In this study, we have evaluated potential of lycopene, [6]-gingerol, and silymarin to induce apoptosis of the human glioblastoma multiforme cells. We hypothesize that natural compounds in glioblastoma cells may be useful for development of new strategies for cancer and other diseases treatment.

The apoptosis was measured using the Annexin V Dead Cell Kit (Merck Millipore, Burlington, MA, USA) according to the manufacturer’s protocols. In general, U-118 MG cells grown in 24-well plates were treated with increasing concentrations of lycopene, [6]-gingerol, silymarin, and DMSO for 24 and 48 h. Adherent cells were washed, collected, and incubated with Annexin V and 7-AAD (7-Aminoactinomycin D -dead cell marker) for 20 min in dark at room temperature. The percentages of live, dead, early, and late apoptotic cells were measured with the Muse® Cell Analyzer (Merck Millipore, Burlington, MA, USA).

2.4. Detection of the Mitochondrial Membrane Potential

The mitochondrial membrane potential changes were measured with the Muse® Cell Analyzer (Merck Millipore, Burlington, MA, USA) using MitoPotential Assay (Merck Millipore, Burlington, MA, USA) according to the manufacturer’s protocol. Briefly, U-118 MG cells were treated with increasing concentrations of lycopene, [6]-gingerol, silymarin and DMSO for 24 and 48 h. Adherent cells were collected, washed and incubated with the MuseTM Mitopotential Dye, a cationic, lipophilic dye to detect changes in the mitochondrial membrane potential for 20 min at 37 °C in the thermoblock (Eppendorf, Hamburg, Germany). Next, cells were incubated with 7-AAD, an indicator of cell death for 5 min at room temperature.

Caspase-3/7 activity was quantified by using the Muse Caspase-3/7 assay kit (Merck Millipore Burlington, MA, USA) according to the manufacturer’s protocol. In short, U-118 MG cells grown in 24-well plates were treated with increasing concentrations of lycopene, [6]-gingerol, silymarin and DMSO for 24 and 48 h. Adherent cells were washed, collected and incubated with the MuseTM Assay Buffer BA, then incubated with MuseTM Caspase-3/7 Reagent, a hallmark of apoptosis for 30 min in the 37 °C incubator with 5% CO2 (Panasonic, Gunma, Japan). Afterwards, cells were incubated with MuseTM Caspase 7-AAD, a dead cell marker for 5 min at room temperature. The percentages of live (Caspase-3/7 (−) and 7-AAD (−)), dead (Caspase-3/7 (−) and 7-AAD (+)), apoptotic cells exhibiting Caspase-3/7 activity (Caspase-3/7 (+) and 7-AAD (−)) and late apoptotic/dead (Caspase-3/7 (+) and 7-AAD (+)) cells were assessed using the Muse® Cell Analyzer (Merck Millipore, Burlington, MA, USA). DNA electrophoresis was performed according to protocol described by Herrmann et al. [19].

The experiment was repeated five times and the results of analysis are presented as median. All the statistical analysis including ANOVA (analysis of variance) Friedman and post-hoc tests analysis was performed using Statistica 13.1 PL (Statsoft, Kraków, Poland).

3.1. Effect of Lycopene, [6]-Gingerol, and Silymarin on Apoptosis of U118-MG Glioblastoma Cells Evaluated by an Annexin V Dead Cell Kit

3.2. Effect of Lycopene, [6]-Gingerol and Silymarin on Apoptosis of U118-MG Glioblastoma Cells Evaluated by a Mitopotential Assay

We demonstrated the capacity of lycopene, [6]-gingerol, and silymarin to induce apoptosis and reduction of mitochondrial membrane potential in glioblastoma cells after 48 hours. Moreover, the results obtained from another experiment (data not shown) about stimulatory effects on apoptosis on kidney and lung cancer cell lines confirmed our hypothesis that these compounds may alter cell-cycle regulatory proteins depending on the dose of substances. Taken together, these data indicated that the potential anticancer and proapoptotic effect of lycopene, [6]-gingerol, and silymarin is dose-dependent.

The study was performed within the project ’Centre for Innovative Research in Medical and Natural Sciences’ realized by the University of Rzeszow, co-financed within the Regional Operational Programme for the Podkarpackie Province for the years 2007–2013, contract number UDA-RPPK.01.03.00-18-004/12-00. This research did not receive any specific grant from funding agencies in the public, commercial, or not-for-profit sectors. 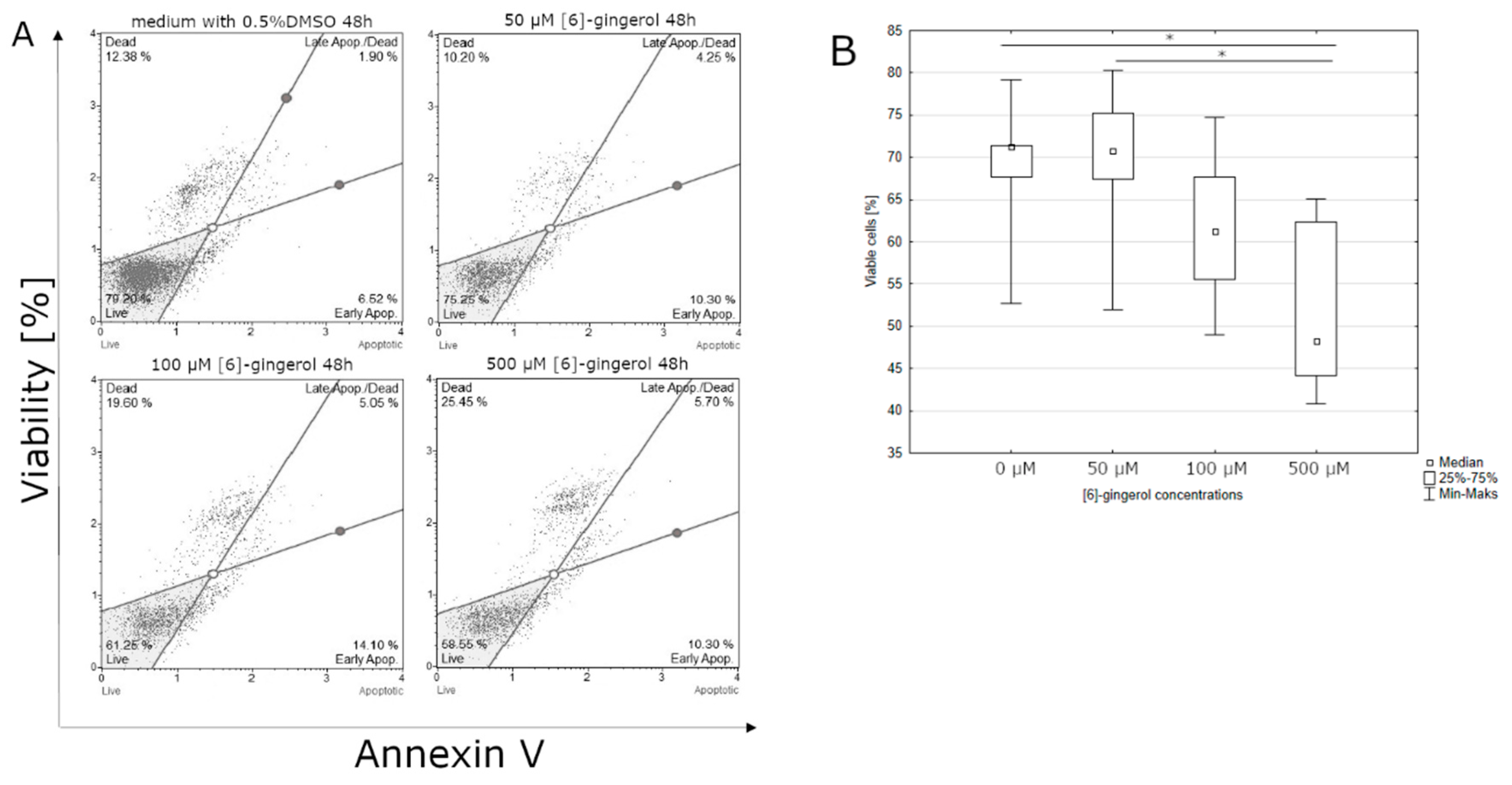 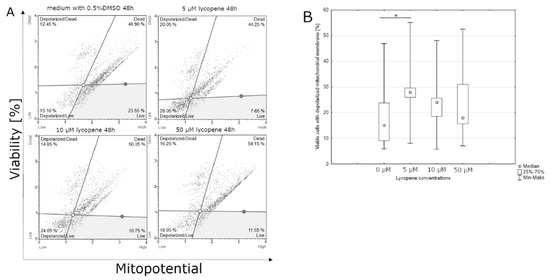 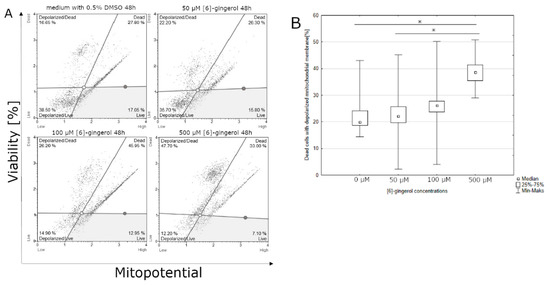 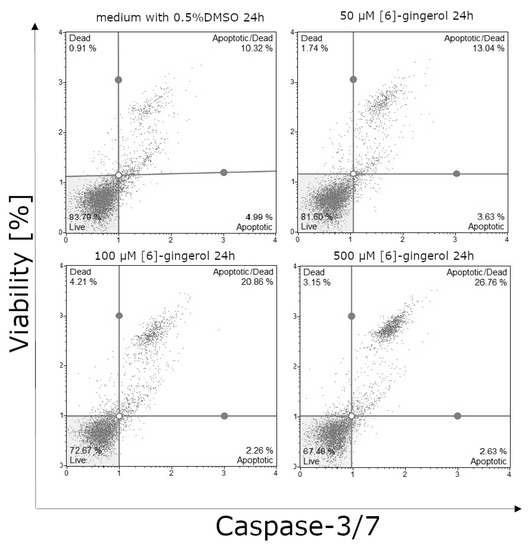 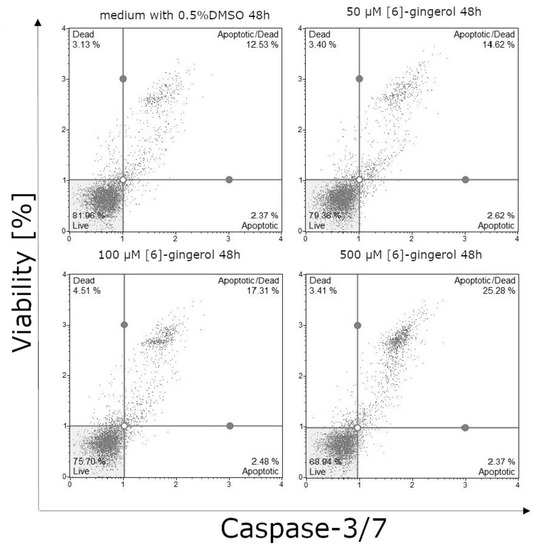 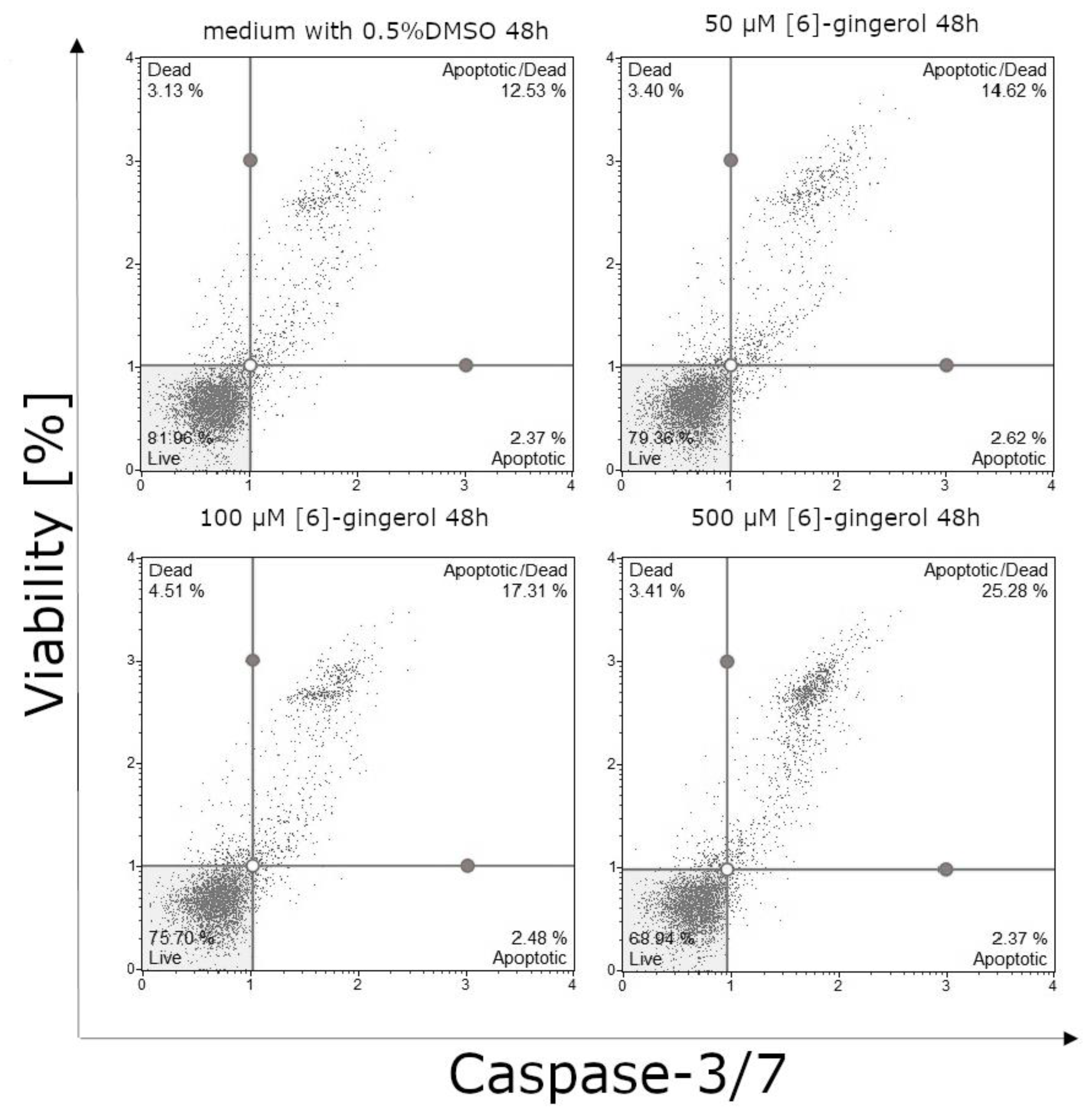