Sickle cell disease (SCD) is a genetic hemoglobinopathy characterized by chronic hemolysis. Chronic hemolysis is promoted by increased oxidative stress. Our hypothesis was that some antioxidant micronutrients (retinol, tocopherol, selenium, and zinc) would be determinant factors of the degree of hemolysis in SCD patients. We aimed to investigate the nutritional adequacy of these antioxidants and their relationships to hemolysis. The study included 51 adult SCD patients regularly assisted in two reference centers for hematology in the State of Rio de Janeiro, Brazil. Serum concentrations of retinol, alpha-tocopherol, selenium, and zinc were determined by high-performance liquid chromatography or atomic absorption spectrometry. Hematological parameters (complete blood count, reticulocyte count, hemoglobin, direct and indirect bilirubin, total bilirubin, lactate dehydrogenase) and inflammation markers (leukocytes and ultra-sensitive C-reactive protein) were analyzed. A linear regression model was used to test the associations between the variables. Most patients presented selenium deficiency and low selenium consumption. Linear regression analysis showed that selenium is the main determinant of hemolysis among the antioxidant nutrients analyzed. Thus, data from this study suggest that the nutritional care protocols for patients with SCD should include dietary sources of selenium in order to reduce the risk of hemolysis.
Keywords: selenium; sickle cell disease; human; hemolysis; antioxidant micronutrients selenium; sickle cell disease; human; hemolysis; antioxidant micronutrients

Sickle cell disease (SCD) is a hereditary disorder caused by a mutation in the gene encoding the β-hemoglobin subunit (β-Hb), which gives rise to hemoglobin S (HbS) [1]. Under low oxygen concentrations, HbS loses oxygen (deoxy-HbS), changes its globular structure, and forms polymers. This also leads to alterations in the discoid morphology of erythrocytes, which assume a sickled shape and become more rigid and more susceptible to hemolysis [2]. HbSS and HbSC are the most common genotypes in SCD. HbC is another single mutation/amino acid change at the same position in β-Hb, but with lysine replacing glutamic acid. Therefore, the HbSC genotype derives from the simultaneous occurrence of mutations (Glu6 → Val; HbS) and (Glu6 → Lys; HbC) in each of the alleles of the gene encoding β-Hb. The homozygous HbSS genotype is associated with the most severe form of SCD, named sickle cell anemia (SCA).
Chronic hemolysis is one of the pathophysiological features of SCD, which reduces erythrocyte lifespan by approximately 70% [3]. This process is related to increased oxidative stress in SCD [4]. HbS instability and auto-oxidation contribute to the overproduction of intracellular reactive oxygen species (ROS), such as the hydroxyl radical (OH·), generated by the Fenton reaction [5,6]. In addition, the release of heme, hemoglobin, and iron in the plasma due to hemolysis triggers a ROS increase in the extracellular environment. The presence of iron and heme in the plasma potentiates the Fenton reaction, damaging proteins and polyunsaturated lipids and causing instability of the erythrocyte membrane [7]. This process is cyclical and depletes the antioxidant systems, ultimately leading to oxidative stress [4].
Some nutrients such as vitamins A, C, E, selenium, and zinc play an important role as part of the antioxidant defense system in minimizing the deleterious effects of ROS [8]. Vitamin A acts by inhibiting the spread of lipid peroxidation, and low serum vitamin A was shown to be associated with increased oxidative stress products and smaller concentrations of reduced glutathione [9]. Vitamin E prevents lipid peroxidation by hindering continuous oxidative chain reactions in membranes and lipoproteins [10] and regenerates vitamin C, preserving its antioxidant role [8]. Zinc is a cofactor of the superoxide dismutase (SOD) enzyme. It inhibits the NADPH oxidase enzyme, helps stabilize sulfhydryl proteins, and antagonizes redox-active metals, such as copper and iron, which catalyze the formation of free radicals through the Fenton reaction [11]. Selenium is present at the active site of glutathione peroxidase (GPx) [12] as a constituent of the amino acid selenocysteine. It maintains the activity of this antioxidant enzyme, protecting hemoglobin against oxidation inside the erythrocytes, thus making them less susceptible to hemolysis [13]. Additionally, selenium plays an important role during erythropoiesis, in which selenoproteins influence the multiple stages of erythroid development, in addition to controlling the oxidative stress that occurs during this process, thus promoting adequate cell maturation [14].
Considering the abovementioned functions, it is plausible that the adequate nutritional status of these micronutrients may protect erythrocytes from hemolysis, particularly in older adults [15,16], whose antioxidant defense is commonly depleted. Life expectancy of individuals with SCA has increased and, in Brazil, the current estimate is 53.3 years of life [17]. Possibly, for this reason, this population is poorly studied. Conversely, deficiency of these micronutrients may contribute to increased oxidative stress and erythrocyte susceptibility to hemolysis. For this reason, we hypothesized that some antioxidant micronutrients (retinol, tocopherol, selenium, and zinc) would determine the degree of hemolysis in SCD adult patients. Therefore, we aimed to investigate the nutritional adequacy of these antioxidants and their relationships to hemolysis. The results may support the development of a better nutritional management for SCD patients, which may improve their clinical status.

This study was conducted from 2012 to 2014 and involved 51 adult SCD patients who met the following criteria: age ≥ 40 years (both sexes); presence of the HbSS and HbSC genotypes; absence of chronic use of immunosuppressive drugs, barbiturates, corticosteroids, and thyroid hormone replacement; no diagnosis of liver disease; no use of vitamin and/or mineral supplements during the last 60 days (except for folic acid); no addiction to narcotics and alcohol; absence of any cognitive impairment that could prevent the collection of the requested information. Patients who had been hospitalized and/or those who received blood transfusions 15 days prior to blood collection were not included in this study.

Whole blood was collected after 8–10 h of fasting in tubes containing the anticoagulant agent ethylenediaminetetraacetic acid (EDTA) or a clot activator gel, or in mineral-free tubes to analyze trace elements. All biochemical and laboratory analyses were performed at the Clinical Analysis Laboratory of the School of Pharmacy (LACFAR), Federal University of Rio de Janeiro (UFRJ).

Adequacy of vitamin A, E, zinc, and selenium intake was determined according to the dietary reference intake (DRI) [22]. Participants provided detailed dietary intake information for two 24 h periods spaced at least 10 days apart. Accurate descriptions and portion sizes of foods consumed were facilitated through the use of food pictures and diagrams. Each participant’s usual intake was obtained through averaging the two 24 h dietary intakes. All 24 h recalls were administered in person. The diet analysis program DietWin® Professional Plus (DietWin, Porto Alegre, Brazil, 2015) was used to determine the intake of food group portions and specific nutrients.

Statistical analyses were performed using the Statistical Package for Social Science software (IBM SPSS® Inc., version 22.0, Chicago, IL, USA). The distribution of continuous variables was analyzed using the Shapiro–Wilk test. Data were described as median, minimum, and maximum values and 25th to 75th percentile, due to the asymmetric distribution of the variables.
Backward linear regression analysis was used to test the significance level in order to identify the relationship between plasma concentrations of antioxidant micronutrients (retinol, α-tocopherol, selenium, and zinc) and hematological parameters (erythrocytes, hemoglobin, reticulocytes, serum LDH, DB, IB, and TB, HbF, and hemoglobin S). Multiple regression analyses were performed individually using a set of dependent variables (hematological parameters) to identify combined associations. Thus, serum antioxidant micronutrients concentrations were considered as independent variables. The control variables were sex, age, ethnicity, genotype, use of hydroxyurea, serum us-CRP concentration, and leukocyte count. Results are presented as B unstandardized coefficients, with the corresponding 95% confidence intervals (95% CI) and p values. A significance level of 5% was adopted for all statistical analyses.

All participants were informed about the study’s objectives and provided written informed consent. The study was approved by the ethics committees of the State Institute of Hematology Arthur de Siqueira Cavalcanti (HEMORIO), technical opinion number 244/10, and of the Pedro Ernesto University Hospital (HUPE), technical opinion number 2819/2010. Therefore, the study was performed in accordance with the ethical standards laid down in the 1964 Declaration of Helsinki and its later amendments.

The characteristics of this study’s participants are shown in Table 1. Of the 51 patients studied, 36 (70.6%) had the HbSS genotype. Mean age was 49.3 years old (±6.57), and most patients were female (54.9%). Regarding skin color, there was a higher prevalence of black patients (52.9%). Most patients (58.8%) did not use the myelosuppressive agent hydroxyurea.
Table 2 shows the descriptive data of hematological parameters, revealing the anemic characteristics of this population.
Table 3 shows the descriptive data of inflammatory parameters and the serum concentrations of antioxidant micronutrients. The results are in accordance with the low-grade chronic inflammation usually observed in SCD. The median concentrations of vitamin A, E, and zinc were above the reference values. On the other hand, selenium median concentration was below the reference value. Accordingly, most patients had adequate serum concentrations of zinc (95.0%), vitamin E (91.8%), and vitamin A (73.5%), while a high rate (93.5%) of inadequate serum concentration of selenium was observed.

Selenium is directly associated with hemolysis in SCD (Table 4). Positive associations between serum concentration of selenium and erythrocyte counts, hemoglobin level, and hematocrit were observed. Serum selenium concentration was inversely associated with hemolysis markers as shown by the result of reticulocyte count and by serum LDH, TB, DB, IB, and HbF concentrations.
Vitamin E was inversely associated with red cell distribution width (RDW) (p = 0.005). The other micronutrients did not present significant association with hematological parameters. There was no significant difference between antioxidant micronutrients concentration when comparing SS and SC genotypes (data not shown).
When redoing the analyses without any adjustment (data not shown), selenium associations with the hemolysis markers (LDH, erythrocytes, hemoglobin, hematocrit, TB, IB, DB, reticulocyte) were maintained, except for HbF (no association of HbF with selenium in the unadjusted model). Moreover, in this unadjusted model, new associations with other nutrients were observed. There was an indirect association between vitamin A and LDH (p = 0.013) as well as between zinc and BD (p = 0.014), vitamin E and BD (p = 0.049), reticulocyte and vitamin A (p = 0.021), and HbS and vitamin E (p = 0.007).

Figure 1 shows the adequacy of antioxidant micronutrients consumption. Most patients consumed inadequate quantities of vitamin A (65%), vitamin E (80%), selenium (82%), and zinc (82%). Two percent (2%) of the individuals studied presented consumption above the tolerable upper intake level (UL) of vitamin A.

Among the antioxidant micronutrients studied, selenium was found to play the most important role in hemolysis in SCD patients. Low serum concentrations of selenium were directly associated with hemolytic events, which may aggravate the condition of these patients and result in more severe complications.
An adequate selenium intake may probably improve SCD patients’ clinical status. Thus, we recommend the inclusion of an increased amount of selenium-rich foods in their diet, in order to increase the concentration of this micronutrient and reduce pro-oxidant and hemolytic processes in SCD. 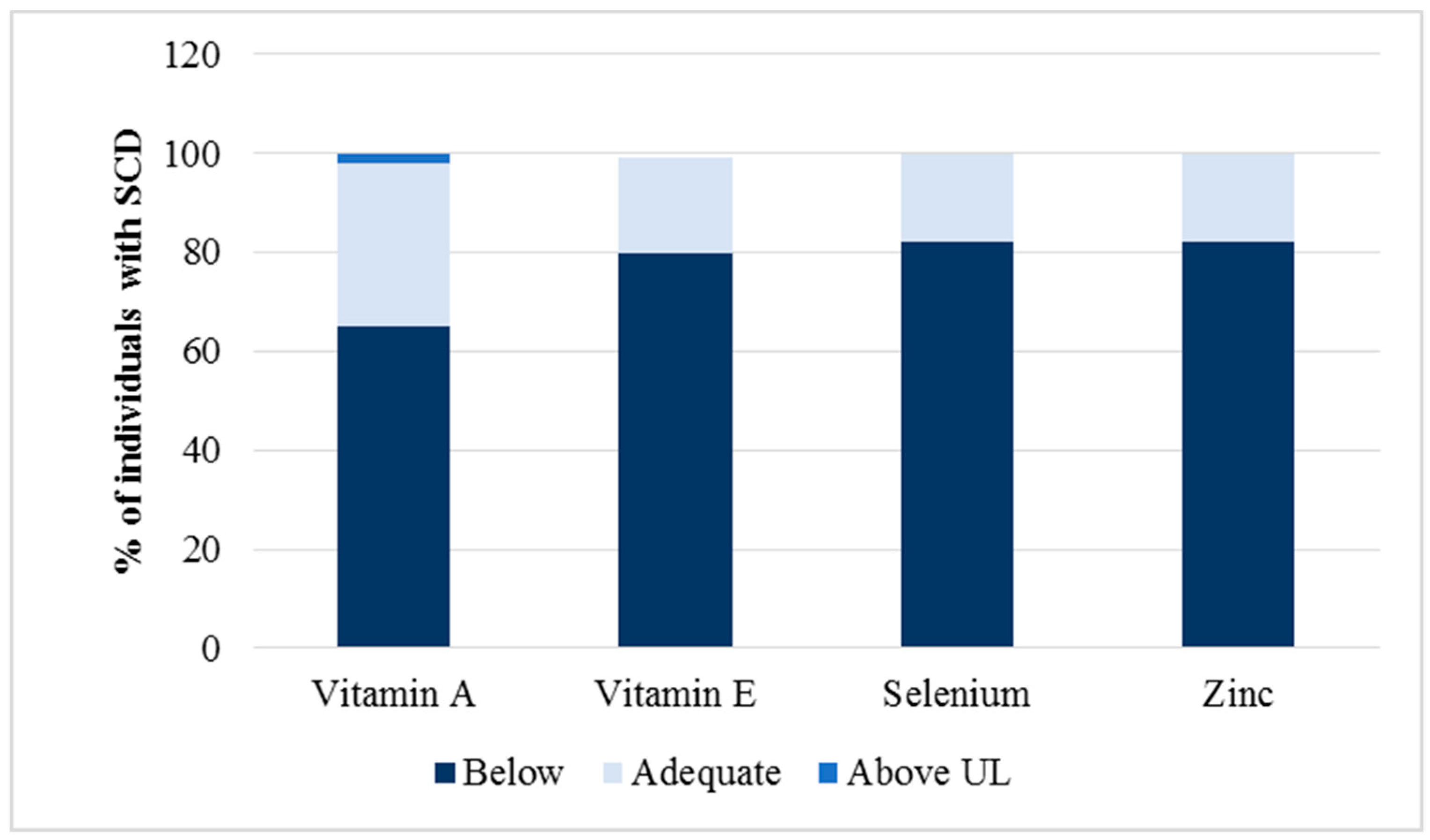 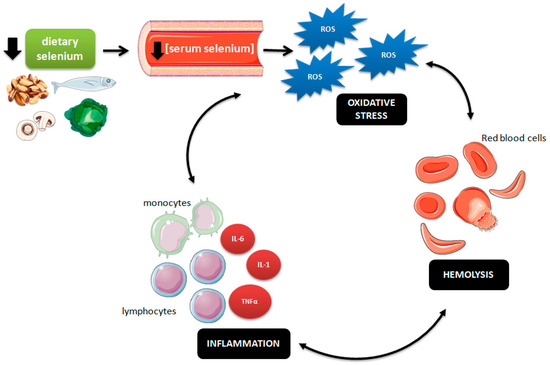