Trends and Correlates of Overweight among Pre-School Age Children, Adolescent Girls, and Adult Women in South Asia: An Analysis of Data from Twelve National Surveys in Six Countries over Twenty Years
Previous Article in Journal

Human and animal studies have shown that Hesperidin has the ability to modulate antioxidant and inflammatory state and to improve aerobic performance. The main objective of this study was to assess whether the acute intake of 500 mg of 2S-Hesperidin (Cardiose®) improves antioxidant status, metabolism, and athletic performance, during and after a rectangular test (aerobic and anaerobic effort). For this, a crossover design was used in 15 cyclists (>1 year of training), with one week of washout between placebo and Cardiose® supplementation. After the intervention, significant differences in average power (+2.27%, p = 0.023), maximum speed (+3.23%, p = 0.043) and total energy (∑ 4 sprint test) (+2.64%, p = 0.028) between Cardiose® and placebo were found in the best data of the repeated sprint test. Small changes were also observed in the activity of catalase, superoxide dismutase, reduced glutathione concentration and oxidized/reduced glutathione (GSSG/GSH) ratio, as well as the lipoperoxidation products (thiobarbituric acid reactive substances; TBARS), at different points of the rectangular test, although not significant. Our findings showed improvements in anaerobic performance after Cardiose® intake, but not in placebo, suggesting the potential benefits of using Cardiose® in sports with a high anaerobic component. View Full-Text
Keywords: hesperidin; hesperitin; antioxidants; catalase; superoxide dismutase; reduced glutathione; oxidized glutathione; performance and exercise hesperidin; hesperitin; antioxidants; catalase; superoxide dismutase; reduced glutathione; oxidized glutathione; performance and exercise
►▼ Show Figures 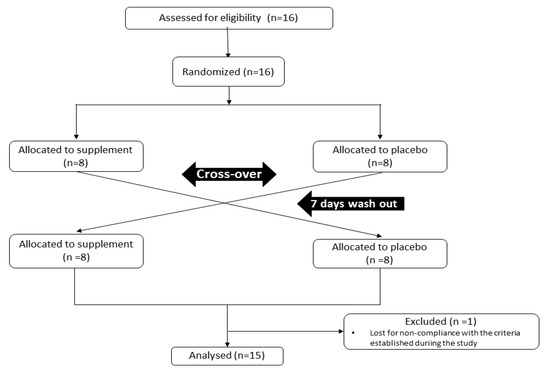