Vegetable-Based Diets for Chronic Kidney Disease? It Is Time to Reconsider

Autosomal dominant polycystic kidney disease (ADPKD) is the most common genetic nephropathy, and tolvaptan is the only therapy available. However, tolvaptan slows but does not stop disease progression, is marred by polyuria, and most patients worldwide lack access. This and recent preclinical research findings on the glucose-dependency of cyst-lining cells have renewed interest in the dietary management of ADPKD. We now review the current dietary recommendations for ADPKD patients according to clinical guidelines, the evidence base for those, and the potential impact of preclinical studies addressing the impact of diet on ADPKD progression. The clinical efficacy of tolvaptan has put the focus on water intake and solute ingestion as modifiable factors that may impact tolvaptan tolerance and ADPKD progression. By contrast, dietary modifications suggested to ADPKD patients, such as avoiding caffeine, are not well supported and their impact is unknown. Recent studies have identified a chronic shift in energy production from mitochondrial oxidative phosphorylation to aerobic glycolysis (Warburg effect) as a contributor to cyst growth, rendering cyst cells exquisitely sensitive to glucose availability. Therefore, low calorie or ketogenic diets have delayed preclinical ADPKD progression. Additional preclinical data warn of potential negative impact of excess dietary phosphate or oxalate in ADPKD progression. View Full-Text
Keywords: autosomal dominant polycystic kidney disease; diet; water; ketogenic; glycolysis; phosphate autosomal dominant polycystic kidney disease; diet; water; ketogenic; glycolysis; phosphate
►▼ Show Figures 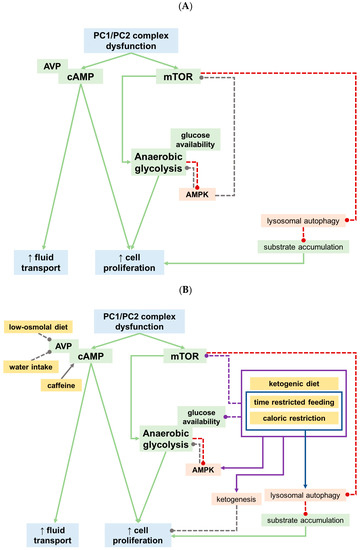