Exposure to Vitamin D Fortification Policy in Prenatal Life and the Risk of Childhood Asthma: Results from the D-Tect Study

Differential Effects of BMI on Brain Response to Odor in Olfactory, Reward and Memory Regions: Evidence from fMRI

Obesity has reached epidemic proportions, motivating research into the underlying mechanisms. Olfaction is a powerful mediator of food consumption, and obesity has been associated with altered olfactory sensitivity. The current study used an event-related functional magnetic resonance imaging (fMRI) to examine the central processing of odor in humans to gain insight into the effect of the body mass index (BMI) on the neural processes involved in rating the pleasantness of a food odor during a hunger state and in a satiety state. We hypothesized that, during the hedonic evaluation of food odor, BMI would be associated with differences in brain activation within olfactory and higher order processing areas important for perception, reward, and memory. We report novel findings of a dissociation between the relationship between BMI and activation in reward areas and in olfactory and odor memory areas, i.e., activation in reward areas decreased as BMI increased, whereas activation in primary olfactory and memory regions increased as BMI increased. A greater BMI is associated with decreased activation in the reward and frontal regions, supporting a blunted reward response in obesity. These findings have important potential implications for decision making, response inhibition, and reward-based behaviors that may play key roles as causal and maintenance factors in obesity. In contrast, a greater BMI is associated with an increased activation in the primary olfactory and memory areas, which was observed during a hunger state. These results raise the speculative hypothesis that high BMI may be associated with hyperactivation in the olfactory and memory areas, and that over time, the resulting excitotoxic effects may contribute to neurodegenerative changes in these areas. View Full-Text
Keywords: olfaction; fMRI; obesity; BMI; reward olfaction; fMRI; obesity; BMI; reward
►▼ Show Figures 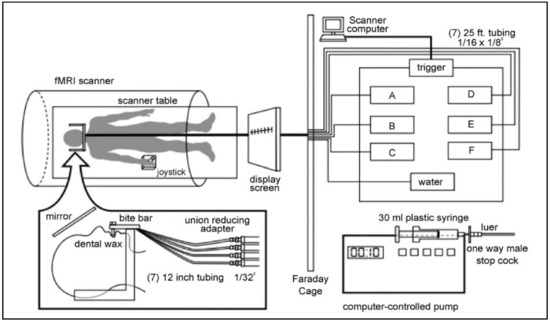