Obesity refers to excessive fat accumulation in adipose tissue due to chronic positive energy balance [1]. Obesity status may play a role in the inflammatory response accompanied with metabolic diseases such as diabetes and cardiovascular disease. It has been shown that increase of fat accumulation contributes to the inflammatory mechanism, with changes in the secretion of pro-inflammatory cytokines [2,3,4].
Cytokines are secreted from adipose tissue macrophage (ATM), which classically comprise two different forms: pro-inflammatory macrophage M1 and anti-inflammatory macrophage M2. ATMs tend to change from M2 to M1 during the progression of adipose hypertrophy, and subsequently release pro-inflammatory cytokines such as tumor necrosis factor-α (TNF-α), interleukin 6 (IL-6), and monocyte chemoattractant protein 1 (MCP-1) [5,6]. Such transformation of adipose tissue-resident macrophages is referred as macrophage polarization.
In a nutrient-overloaded environment, dysregulation of mitochondrial biogenesis and dysfunctional mitochondria can result in incomplete mitochondrial fatty acid oxidation, increased reactive oxygen species (ROS) generation, and impaired glucose metabolism and insulin resistance [7,8,9]. These are supported by numerous clinical studies showing decreased activities of enzymes, biomarkers of muscle mitochondrial content, and mitochondrial number in obese human skeletal muscle [10,11,12]. Given the positive relationship between obesity and skeletal muscle mitochondrial dysfunction, it is necessary to prevent obesity-induced mitochondrial changes in skeletal muscle.
Buckwheat originated from the Yunnam province in southwest China and is widely consumed as flour or tea in many countries [13]. Buckwheat contains lots of bioactive components and is rich in flavonoids, including orientin, vitexun, quercetin, and rutin. Especially, tartary buckwheat (Fagopyrum tataricum) is known to have about 80-folds higher rutin than common buckwheat (Fagopyrum esculentum) [14]. From this respect, the bioactive functions of tartary buckwheat such as anti-oxidation, hypocholesterolemia, and anti-inflammation had been widely studied. Ethanol extract of tartary buckwheat sprout suppressed pro-inflammatory mediator production via inhibition of NF-κB p65 translocation in LPS-stimulated Raw 264.7 cells [15]. In 3T3-L1 cells, tartary buckwheat ethanol extract also attenuated inflammatory response with modulating nitric oxide (NO) production and gene expression of TNF-α, and IL-6 [16]. Therefore, this study investigated the effects of tartary buckwheat extract (TB) on adipogenesis regulation and inflammation and muscle mitochondrial biogenesis in a high-fat diet (HFD)-induced obese rat model.

The TB was kindly supplied by the SKBioland Co. (Ansan, Gyeonggi, Korea). The extraction was performed as previously described [16]. Briefly, the TB was extracted with 70% ethanol (1:15 (w/v)) at 80 °C for 3 h, and then filtered. The filtrate was vacuum-evaporated and the concentrated liquid was spray-dried into a powder form (Dongjin ENG Inc., Siheung, Korea).

All experimental procedures related to animals were approved by the Institutional Animal Care and Use Committee (IACUC) of Ewha Womans University (IACUC No. 16-022). Three-week-old male Sprague-Dawley rats, weighing 60–70 g each, were purchased from Doo Yeol Biotech (Seoul, Korea). Each rat was housed individually in a wire meshed cage under a controlled environment: 12-h light/dark cycle at a constant temperature (22 ± 2 °C) and humidity (55 ± 5%). After one week of acclimation, the rats were randomly divided into four groups (n = 8/group): normal diet (NOR), HFD (45% kcal from fat), HFD containing 0.5% TB extract (TB-L), and HFD containing 1.0% TB extract (TB-H). A commercial chow diet (Harlan 2018s; Harlan, Indianapolis, IN, USA) was served as NOR, which contained 18% crude protein, 6% fat, 44% carbohydrate, 15% fiber, and 5% ash. The diet composition of HFD, TB-L, and TB-H are described in Table 1. Body weight and food intake were measured twice a week during the 13-week experimental period. Rats were fasted for 16 h before sacrifice and anesthetized with zoletil:xylazine (4:1) at a dose of 0.1 mL/80 g body weight. Blood samples were collected by cardiac puncture and centrifuged at 1500× g for 20 min at 4 °C. Serum was obtained and stored separately at −40 °C until analysis. Epididymal white adipose tissue (WAT) and skeletal muscle (biceps femoris) were dissected, immediately frozen in liquid nitrogen, and stored at −70 °C until further analysis.

The epididymal WAT was fixed with a 10-fold volume of 10% formalin overnight. After fixing, the tissues were embedded in paraffin and sectioned and stained with hematoxylin and eosin (H&E) using a commercial staining kit (ScyTek Laboratories, Logan, UT, USA). Samples were observed under a microscope (Olympus, Tokyo, Japan) and captured at 200× magnification.

Serum TNF-α concentration was measured using Rat TNF-α ELISA MAX™ Deluxe (BioLegend, Inc., San Diego, CA, USA) according to manufacturer instructions. Serum TNF-α molecule density is expressed as a measure of enzyme-reacted color proportion. Absorbance of the samples was read using a microplate reader at 450 nm. The sensitivity of the kit was 2 pg/mL

NO production was measured as serum nitrite using a commercial kit (Griess reagent kit for nitrate determination; Thermo Scientific, Pittsburgh, PA, USA). NO release into serum was reacted with the reagent provided by the kit for 30 min, and the absorbance was measured at 548 nm. The nitrite concentration was determined using sodium nitrite as a standard. Values were presented as fold-difference compared to values from the HFD group.

GPDH activity was measured by using a GPDH assay kit (Takara, Japan) in WAT. Sample used for this analysis was obtained by homogenizing 0.1 g of WAT with 200 μL of enzyme extraction buffer. The assay procedure provided by the manufacturer was followed. Results were normalized to total protein concentration, which was determined with a bicinchoninic acid (BCA) protein assay kit (Thermo Scientific). Normalized GPDH activity was presented as the fold-difference compared to values from the HFD group.

After 13 weeks on the experimental diets, the final body weight of the rats consuming the HFD increased 1.15-fold compared to rats consuming the NOR diet. However, there was no statistical difference between the HFD group and the TB treatment groups (Table 3). Retroperitoneal, epididymal, and total WAT weights of rats in the HFD group were 86%, 71%, and 78% greater, respectively, than those in the NOR group (p < 0.05). TB treatment tended to reduce retroperitoneal WAT weight in a dose-dependent manner, but there was no statistical significance. Epididymal WAT weight in the TB-L group was significantly lower by 21% than in the HFD group (p < 0.05). In the TB-L and TB-H groups, total WAT weights were significantly lower by 18% and 16%, respectively, when compared to WAT mass in the HFD group (p < 0.05) (Figure 1B). Similar to total WAT mass, TB groups demonstrated smaller adipocyte size (Figure 1A).

AMP-activated protein kinase (AMPK) is a key enzyme in the regulation of energy balance, concomitant adipogenesis, and the inflammatory response, and AMPK activity was measured herein in WAT. TB treatment significantly increased WAT AMPK activity in a dose-dependent manner with a 49% significant increment at 1% TB-supplemented group (TB-H) compared to the HFD group (p < 0.05) (Figure 5).

Obesity is closely associated with mitochondrial loss and dysfunction. Next, we determined mRNA levels of mitochondrial genes such as peroxisome proliferator-activated receptor coactivator-1α (PGC-1α) and sirtulin 1 (SIRT1) in skeletal muscle. TB significantly upregulated muscle PGC-1α and SIRT1 gene expression about 2-fold compared to the HFD group (p < 0.05) (Figure 6A,B). In addition, TB treatment significantly increased muscle SIRT enzyme activity by up to 2.3-fold compared to HFD diet (Figure 6C). These data demonstrate that the favorable effect of TB on obesity may be in part due to mitochondrial change in skeletal muscle. 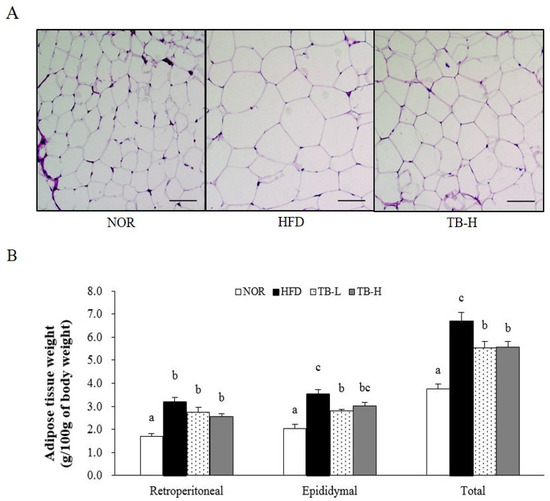 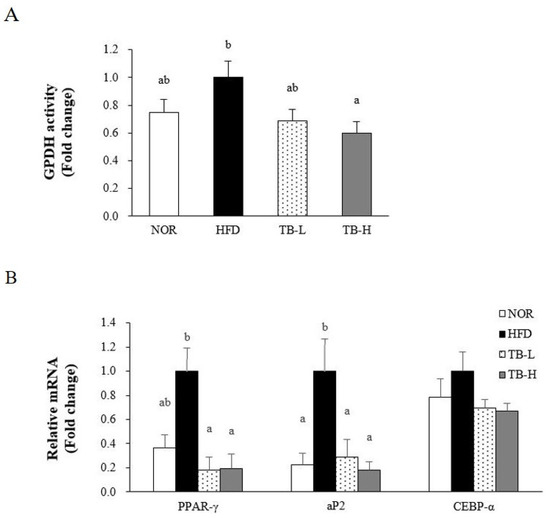 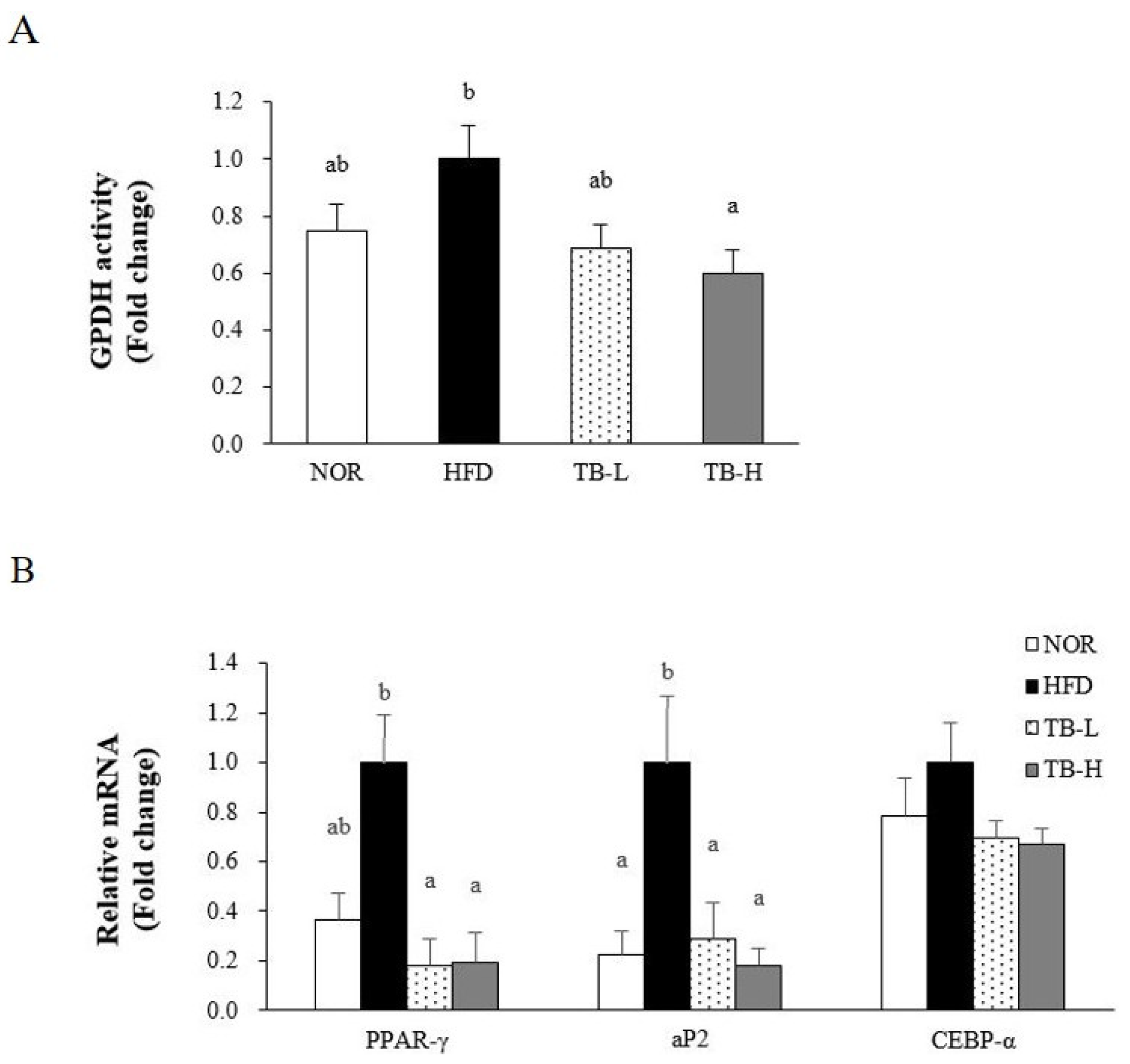 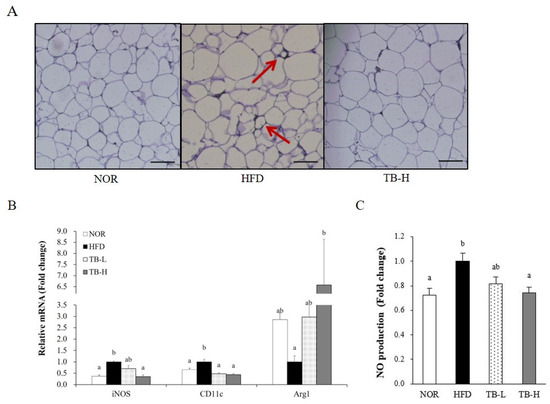 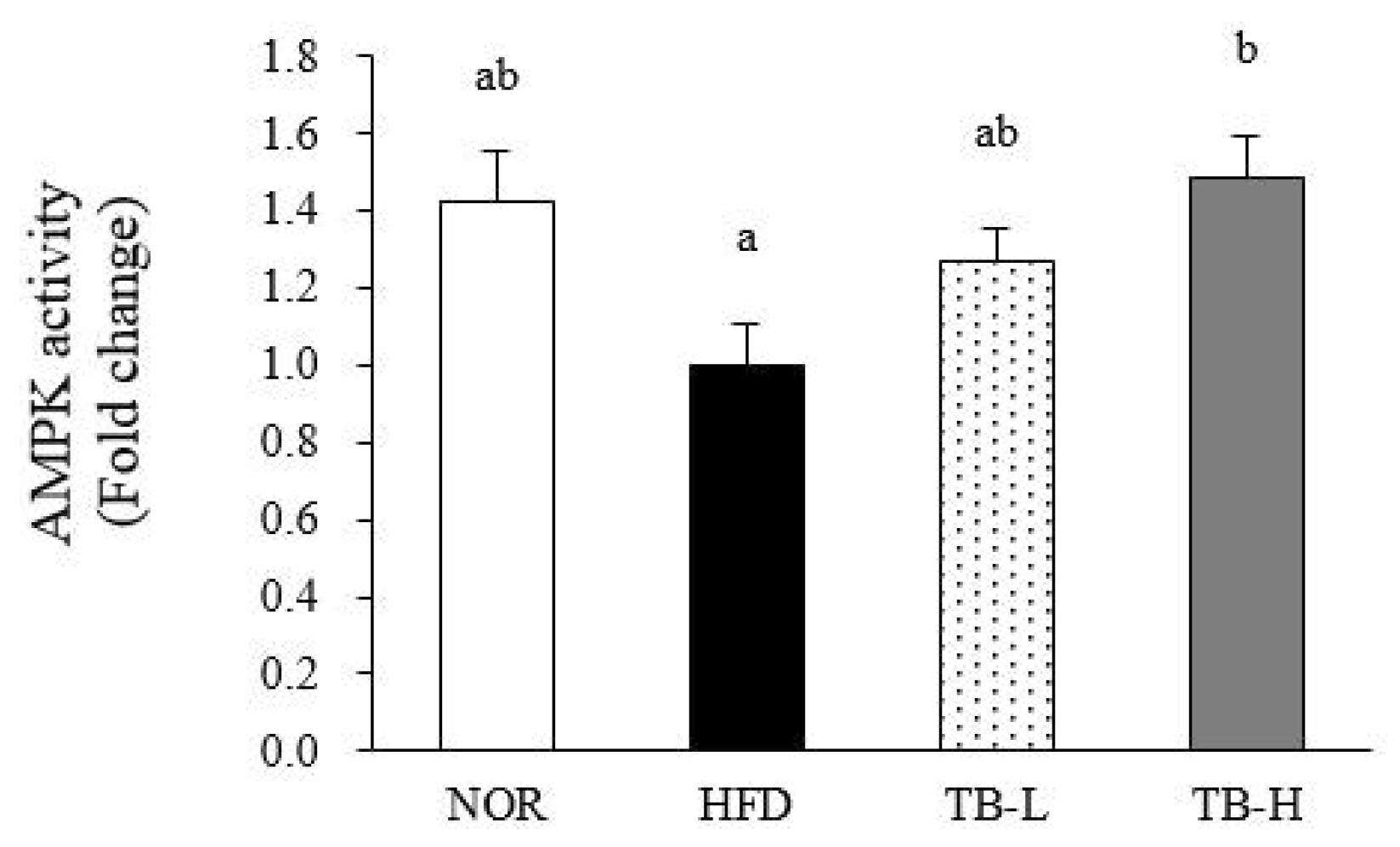