The Australian front-of-pack labelling system, Health Star Rating (HSR), does not include whole grain (WG) in its algorithm, but uses dietary fibre (DF), despite Dietary Guidelines recommending WG over refined grain (RG) foods. This study aimed to determine how effectively HSR differentiates WG and RG foods. Product label data were collected 2017–18 from bread, rice, pasta, noodles, flour and breakfast cereals (n = 1127). Products not displaying HSR, DF per 100 g, and %WG ingredients were excluded, leaving a sample of 441 products; 68% were WG (≥8 g/manufacturer serving). There was a significant difference (p < 0.001) in HSR between WG bread and breakfast cereal over RG varieties, yet the mean difference in stars depicted on the pack was only 0.4 for bread and 0.7 for breakfast cereal. There was no difference for rice (p = 0.131) or flour (p = 0.376). Median HSR also poorly differentiated WG. More WG foods scored 4–5 stars compared to RG, yet there was notable overlap between 3.5–5 stars. DF content between RG and WG subcategories was significantly different, however wide variation and overlap in DF highlights that this may not be a sufficient proxy measure, raising concerns that the HSR algorithm may not adequately communicate the benefits for consumers of swapping to WG foods.
Keywords: health star rating; front-of-pack; food labelling; whole grain; refined grain; dietary fibre health star rating; front-of-pack; food labelling; whole grain; refined grain; dietary fibre

Product data from bread, rice, pasta, noodles, flour, and breakfast cereals were collected between September 2017–September 2018 from four major supermarkets in the Sydney Metropolitan area (Woolworths, Coles, Aldi, IGA), representing more than 80% of total market share [25], with the addition of a Bakery franchise (Bakers DelightTM, Camberwell, Victoria, Australia). Nutrition information was analysed through a recognised process published previously [26].
Data collection for each subcategory involved photographing all on-pack information, including labels, ingredient lists, nutrition and health claims, and Nutrition Information Panels [27]. An additional internet search was conducted to capture any products not available on shelf at the time of data collection, and all data obtained from photographs were then transcribed into a Microsoft® Excel® spreadsheet 2013 (Redmond, WA, USA) for analysis. Data were checked by a second, independent reviewer to detect inconsistencies or errors.
Data for this study were then selected from the larger data set to allow comparison of whole grain and refined grain foods from each subcategory displaying an HSR. Outlined in Appendix A, this included bread (loaves, rolls, sandwich alternatives, and flatbreads), rice (dry and microwaveable, plain and flavoured), pasta (dry, white and wholemeal), noodles (dry and cooked, plain and flavoured), flour (plain and self-raising, white and wholemeal), and breakfast cereals (ready-to-eat, muesli, granola, clusters, hot cereals plain and flavoured).
Products were included in the analysis if the food displayed an HSR on-pack, dietary fibre per 100 g, and percentage of whole grain ingredients, as it is not possible to estimate whole grain accurately without this information. Exclusion criteria are outlined in Appendix B. The remaining grain foods were then categorised into either whole grain or refined grain, based on eligibility for registration with the Grains & Legumes Nutrition Council’s Code of Practice for whole grain claims (>8 g whole grain per manufacturer serve). The mean, standard deviation (SD), median and range for dietary fibre (per 100 g), whole grain (per 100 g), and HSR were determined within refined grain and whole grain foods in each subcategory. T-tests comparing dietary fibre and whole grain content (g/100 g), and the HSR between whole grain and refined grain subcategories were performed in Microsoft® Excel® 2013 (Redmond, WA, USA).

This research received no external funding but was supported by the Grains & Legumes Nutrition Council, a not-for-profit charity.

GLNC would like to acknowledge the assistance provided by numerous University of Wollongong and University of Newcastle dietetic students in the data collection for this study.

The authors are employed by the Grains & Legumes Nutrition Council, a not-for-profit charity. 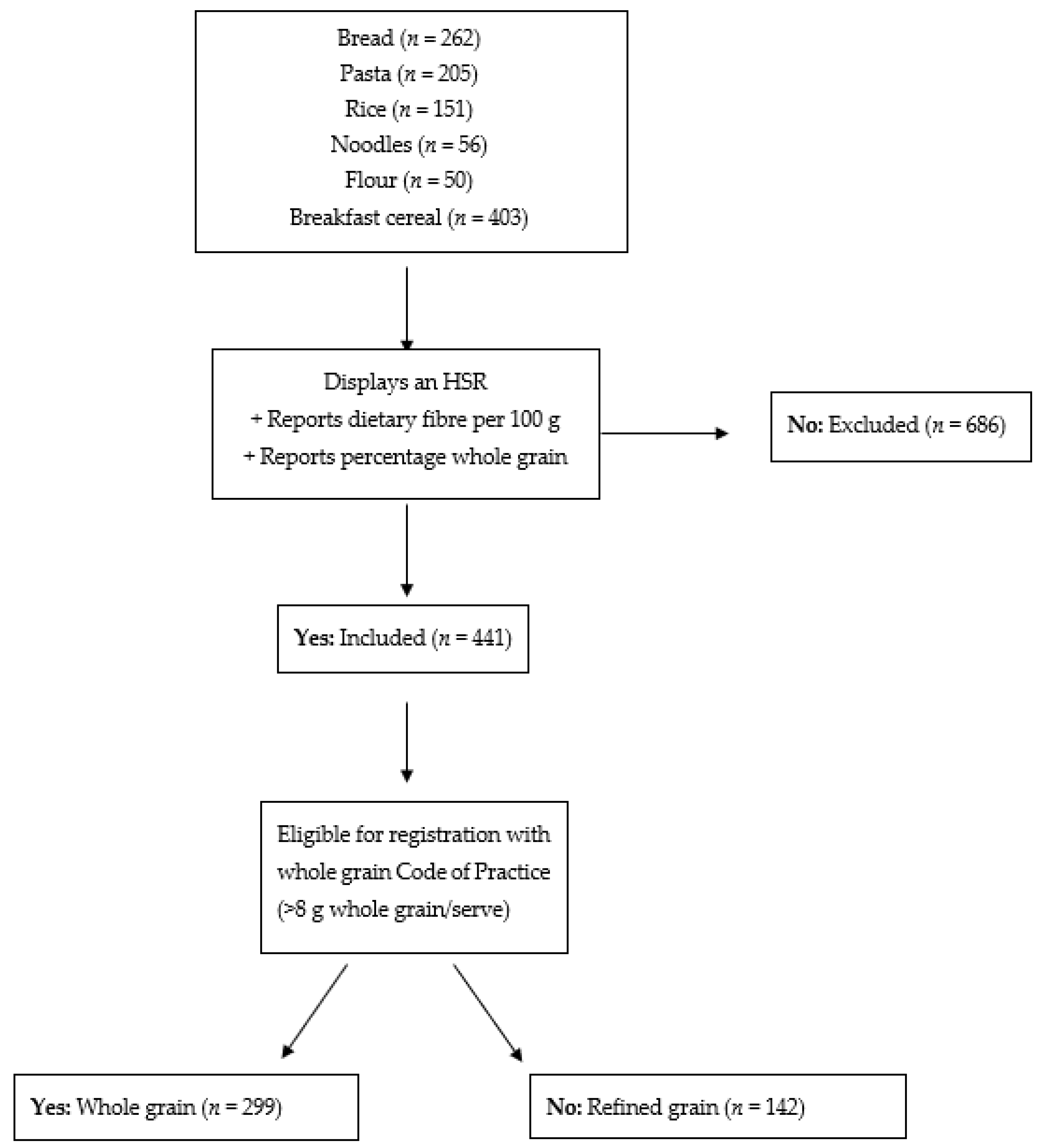