The cause of progression to non-alcoholic fatty liver disease (NAFLD) is not fully understood. In the present study, we aimed to investigate how curcumin, a natural phytopolyphenol pigment, ameliorates NAFLD. Initially, we demonstrated that curcumin dramatically suppresses fat accumulation and hepatic injury induced in methionine and choline-deficient (MCD) diet mice. The severity of hepatic inflammation was alleviated by curcumin treatment. To identify the proteins involved in the pathogenesis of NAFLD, we also characterized the hepatic proteome in MCD diet mice. As a result of two-dimensional proteomic analysis, it was confirmed that thirteen proteins including antioxidant protein were differentially expressed in hepatic steatosis. However, the difference in expression was markedly improved by curcumin treatment. Interestingly, eight of the identified proteins are known to undergo O-GlcNAcylation modification. Thus, we further focused on elucidating how the regulation of O-linked β-N-acetylglucosamine (O-GlcNAc) modification is associated with the progression of hepatic steatosis leading to hepatitis in MCD diet mice. In parallel with lipid accumulation and inflammation, the MCD diet significantly up-regulated hexosamine biosynthetic pathway (HBP) and O-GlcNAc transferase (OGT) via ER stress. Curcumin treatment alleviates the severity of hepatic steatosis by relieving the dependence of O-GlcNAcylation on nuclear factor-κB (NF-κB) in inflammation signaling. Conversely, the expressions of superoxide dismutase 1 (SOD1) and SIRT1 were significantly upregulated by curcumin treatment. In conclusion, curcumin inhibits O-GlcNAcylation pathway, leading to antioxidant responses in non-alcoholic steatohepatitis (NASH) mice. Therefore, curcumin will be a promising therapeutic agent for diseases involving hyper-O-GlcNAcylation, including cancer. View Full-Text
Keywords: liver; O-GlcNAcylation; curcumin; NAFLD and SOD1 liver; O-GlcNAcylation; curcumin; NAFLD and SOD1
►▼ Show Figures 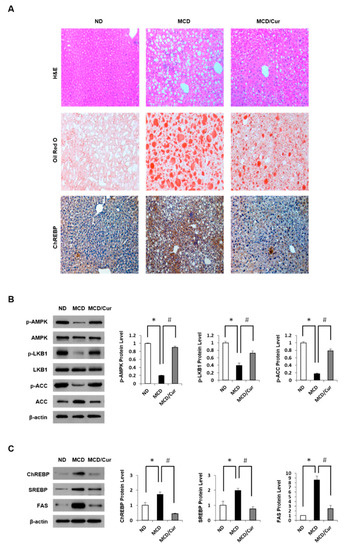