From the Table to the Tumor: The Role of Mediterranean and Western Dietary Patterns in Shifting Microbial-Mediated Signaling to Impact Breast Cancer Risk

Effects of Flaxseed and Its Components on Mammary Gland MiRNome: Identification of Potential Biomarkers to Prevent Breast Cancer Development

Breast cancer is the most common cancer among women worldwide. We previously showed that early-life exposure to flaxseed (FS) or its components, FS oil (FSO) and secoisolariciresinol diglucoside (SDG), affects the mammary gland (MG) and is associated with the reduction of breast cancer risk during adulthood. However, the underlying mechanisms are not understood. This study aimed to investigate the effect of FS, FSO, and SDG on the MG miRNA signature at a late stage of development. Female C57BL/6 mice, 4–5 weeks of age, were randomized into four groups to receive: (i) basal AIN-93G, (ii) 10% FS, (iii) 3.67% FSO, or (iv) 0.15% SDG. After 21 days, the mice were sacrificed and MG miRNAs were profiled. Diet-specific MG miRNA signatures were identified. Deregulated miRNAs were associated with breast cancer and targeted genes involved in MG development, growth, and cancer. The study allowed for the identification of potential biomarkers or novel therapeutic targets to prevent and/or reduce the risk of breast cancer. View Full-Text
Keywords: breast cancer; flaxseed; mammary gland; microRNAs breast cancer; flaxseed; mammary gland; microRNAs
►▼ Show Figures 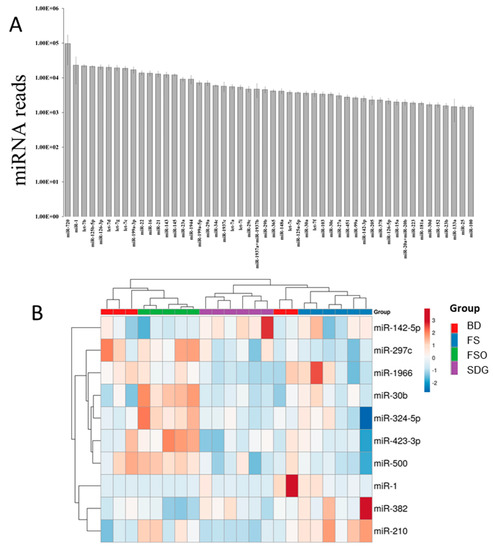