Translation of a Mediterranean-Style Diet into the Australian Dietary Guidelines: A Nutritional, Ecological and Environmental Perspective
Previous Article in Journal

Oily Fish Consumption and the Risk of Dyslipidemia in Korean Adults: A Prospective Cohort Study Based on the Health Examinees Gem (HEXA-G) Study

Despite the beneficial effects of omega-3 fatty acids from fish or fish oil on cardiovascular diseases, limited information is available regarding the effects of oily fish in the diet on the risk of dyslipidemia. This study aimed to investigate the association between oily fish consumption and the incidence of dyslipidemia among Korean adults included in the Health Examinees Gem (HEXA-G) cohort during 5 years of follow-up. In total, 20,670 participants (5710 men and 14,960 women) were included in this study. The average intake of oily fish including dark meat fish, such as mackerel, pacific saury, and Spanish mackerel, and eel, was estimated using food frequency questionnaires. Oily fish consumption was associated with a significantly lower risk of hypertriglyceridemia in both men (Relative risk (RR) comparing extreme quintiles = 0.75; 95% CI 0.60–0.95; P for trend = 0.0121) and women (RR comparing extreme quintiles = 0.81; 95% CI 0.69–0.96; P for trend = 0.0110) after adjusting for potential confounders. In conclusion, increased consumption of oily fish was significantly associated with a lower risk of hypertriglyceridemia in the general Korean population. Future randomized clinical trials or prospective studies are required to confirm these findings in the Korean or other Asian populations.
Keywords: fish; oily fish; omega-3 fatty acid; dyslipidemia; hypertriglyceridemia fish; oily fish; omega-3 fatty acid; dyslipidemia; hypertriglyceridemia

Dyslipidemia is a metabolic anomaly distinguished by an increase or reduction in the plasma lipid fraction [1]. Generally, high levels of low-density lipoprotein cholesterol (LDL-C), total cholesterol (TC), triglycerides (TG), and low levels of high-density lipoprotein cholesterol (HDL-C) are the primary risk factors of atherosclerosis, leading to cardiovascular disease (CVD) and coronary heart disease (CHD) [2]. The prevalence of dyslipidemia has continuously increased not only in Korea but also worldwide. An estimated 53% and 44% of the U.S. and Korean adults, respectively, have dyslipidemia [3,4]. Among the blood lipid components, LDL-C is the most important risk factor in the pathophysiology of CVD, and reducing LDL-C levels leads to dose-dependent reduction in the risk of major cardiovascular events that is proportional to the absolute magnitude of the reduction in LDL-C [5]. Furthermore, a meta-analysis of controlled trials reported that a 1 mmol/L reduction in TG was associated with reduction in coronary events by 54% for the overall population and by 43% in those with high TG levels [6]. Thus, improvement in the lipid profile is important to prevent CVD.
Nutritional and lifestyle modifications form the basis for treating dyslipidemia to prevent and reduce the risk of CVD [7]. Many epidemiological studies have reported the beneficial effects of omega-3 poly-unsaturated fatty acids (PUFAs) on cardiovascular health [8,9] The cardioprotective effects of omega-3 PUFAs, particularly in terms of blood lipid, can be explained by mechanisms such as increased clearance and decreased hepatic very-low-density lipoprotein production rates [8]. Fish is the primary dietary source of omega-3 PUFAs. Among omega-3 PUFAs, eicosapentaenoic acid (EPA), and docosahexaenoic acid (DHA) have been most widely studied for their beneficial effects on cardiovascular health [8,9]. Furthermore, these fatty acids reduce blood pressure, serum TG, and glucose levels, and increase HDL-C levels [10,11]. Other than PUFAs, such as DHA and EPA, fish also includes vitamin D and high-quality proteins, which may have beneficial effects against dyslipidemia [12,13].
Despite numerous epidemiological studies on the beneficial effects of omega-3 fatty acids from fish or fish oil against CVD, limited information is available regarding the effects of oily fish in the diet on the risk of dyslipidemia. Oily fish, such as mackerel, tuna, salmon, sardines, and herring, are the primary dietary sources of omega-3 fatty acids, particularly DHA and EPA [8,9]. Therefore, oily fish may have more potent effects on the risk of dyslipidemia when compared to non-oily fish.
Moreover, although fish is a major part of the Korean diet, accounting for approximately 20% of the energy intake from animal sources owing to its peninsular characteristics [14], limited information is available regarding the effects of fish consumption against the risk of dyslipidemia. The purpose of the present study was to examine the association between oily fish consumption and the incidence of dyslipidemia among Korean adults included in the Health Examinees Gem (HEXA-G) Study cohort during 5 years of follow-up.

The HEXA study [15,16] is a large-scale community-based prospective cohort study conducted in Korea. The baseline survey of HEXA study was conducted from 2004 to 2013. In total, 169,722 participants aged 40–69 years were recruited in 38 general hospitals and health examination centers in eight regions in Korea. Based on previous HEXA studies, this study used data of the individuals included in the HEXA-G cohort, for which additional eligibility criteria were applied (i.e., hospitals or health examination centers). Of the original 38 sites, 30,374 individuals at 21 sites were excluded in accordance with previously reported exclusion criteria [17]. Thus far, 64,486 participants of the HEXA-G study completed the initial follow-up survey between 2012 and 2016. Among them, those with dyslipidemia (n = 40,983), diabetes (n = 1,277), or cardiovascular diseases (n = 597) at baseline and with insufficient data regarding blood lipid profiles at baseline (n = 3) and at follow-up (n = 6), implausible energy intake (< 800 or ≥ 4000 kcal/day in men and < 500 or ≥ 3500 kcal/day in women) (n = 938), and those with insufficient information regarding body mass index (BMI) (n = 12) were excluded. Finally, 20,670 participants (5710 men and 14,960 women) were included in this study. The HEXA-G study was approved by the Ethics Committee of the Korean Health and the institutional review boards of all participating hospitals (IRB No. E-1503-103-657). All participants provided informed written consent prior to participating the study.

The validated semi-quantitative food frequency questionnaire (FFQ), including 106 food items, was used at baseline and follow-up examinations to assess oily fish consumption and nutrient intake among participants. The participants were asked how often they consumed each food item on average during the past year. Daily nutrient intake was calculated by multiplying the frequency of consumption of each food item by its nutrient content and summing up the nutrient intake from all food items. Of the 14 fish items, oily fish comprised dark-meat fish, including mackerel, pacific saury, and Spanish mackerel, and eel. The cumulative average intake of oily fish was estimated using the first (at baseline) and second (at follow-up) FFQs to represent long-term intake.

2.4. Assessment of Other Variables

Body mass index (BMI) was determined by dividing the body weight by the square of the height (kg/m2). BMI values were used to classify participants into the following groups: underweight (BMI < 18.5 kg/m2), normal (BMI ≥ 18.5 kg/m2 and < 23 kg/m2), overweight (BMI ≥ 23 kg/m2 and < 25 kg/m2), and obese (BMI ≥ 25 kg/m2) in accordance with the International Obesity Task Force for adults in Asian and Pacific regions [18]. Sociodemographic variables, such as age, sex, and education level, and lifestyle variables, such as alcohol consumption, current smoking status, and physical activity, were obtained through self-administered questionnaires. Education level was divided into three categories: under middle school, high school, and over college. Alcohol consumption was divided into two categories: “current drinker” (drank alcohol at the time of survey) or “non-drinker” (never drank alcohol or have abstained from alcohol). Current smoking status was divided into three categories: “current smoker” (smoked cigarettes at the time of survey), “past smoker” (have abstained from cigarettes smoking), or “never smoker” (never smoked cigarettes). Physical activity was divided into two categories: “active” (performed physical activity for ≥ 30 min once a day for ≥ 5 d a week) or “inactive.”

For each participant, person-years of follow-up were calculated from baseline to the first follow-up examination. We calculated the incidence of dyslipidemia and its components per person years. We performed Cox proportional hazards regression analysis to estimate the relative risks (RRs) and 95% confidence interval (CI) of dyslipidemia in accordance with the quintiles of oily fish consumption after adjusting for potential confounders, such as age (continuous), BMI (continuous), education level, alcohol consumption, current smoking status, physical activity, and energy intake (continuous) by sex. Subgroup analysis was performed for dyslipidemia and its components, which revealed significant associations with oily fish consumption. We estimated the RR and 95% CI of the fifth quintile (Q5) in comparison with the first quintile (Q1) by sex in accordance with baseline age, baseline BMI level, and menopausal status (in women). All statistical analyses were performed using SAS software version 9.4 (SAS Institute, Cary, NC, USA) and a two-sided p-value < 0.05 was considered statistically significant.

Increased oily fish consumption is significantly associated with a lower risk of hypertriglyceridemia after adjusting for potential confounders in the general Korean population. The present results suggest that oily fish consumption potentially protects against dyslipidemia and related chronic diseases among Korean adults. Future randomized clinical trials or prospective studies are needed to further analyze these findings in the Korean or other Asian populations.

We acknowledge the participants and all members of the HEXA Study Group. 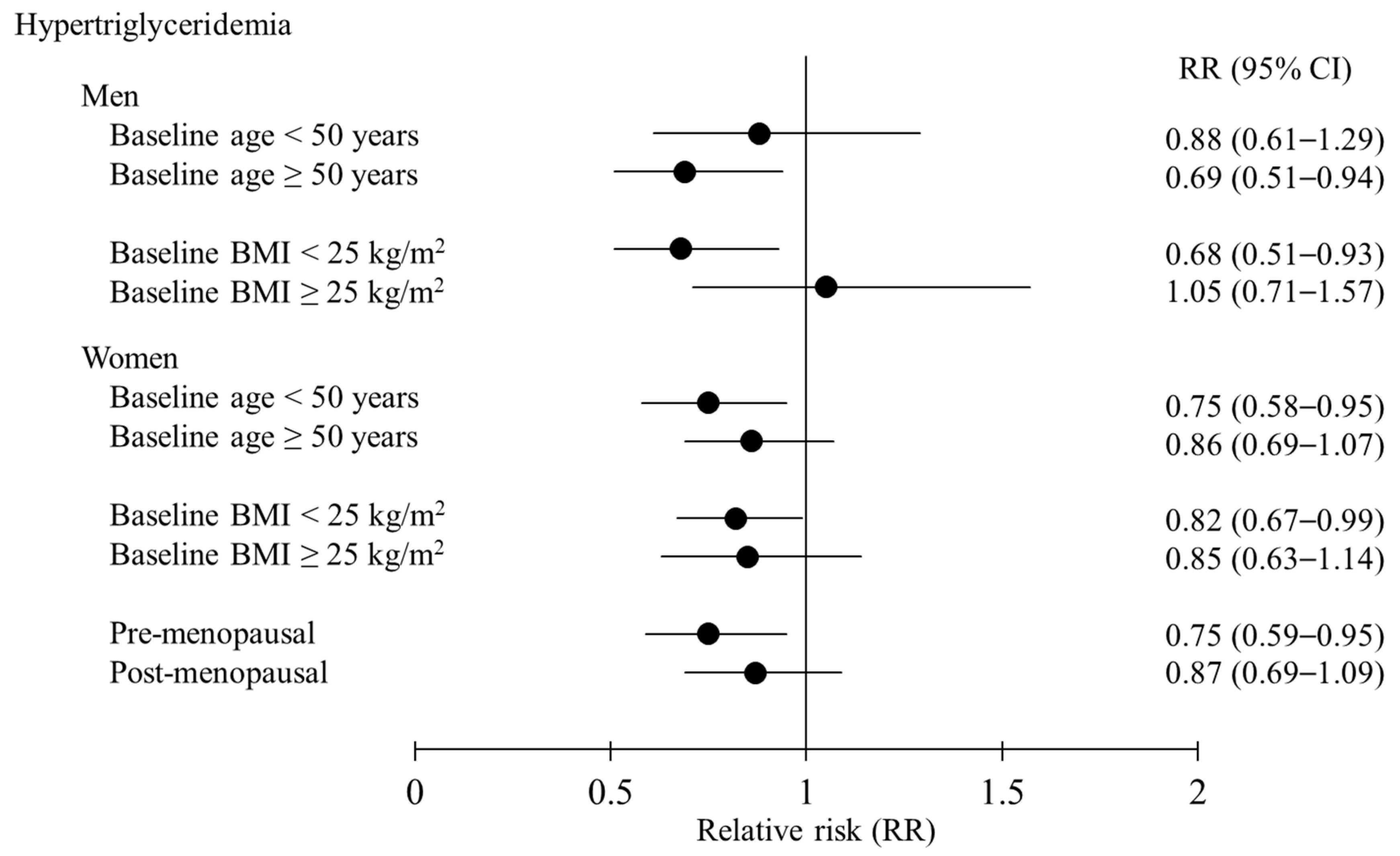