A Narrative Review of The Role of Foods as Dietary Sources of Vitamin D of Ethnic Minority Populations with Darker Skin: The Underestimated Challenge

Coeliac disease (CeD) is an immune-mediated inflammatory enteropathy triggered by the ingestion of gluten in genetically susceptible individuals. Gastrointestinal (GI) hormone response related to appetite and glucose metabolism is still under-investigated in patients with CeD. This study aimed at shedding light on the appetite sensations, glycaemia and hormone response induced by a complex meal in patients with coeliac disease. Twenty-two women with CeD, nine at the diagnosis (CeDD) and thirteen under a gluten-free diet (CeDGF), and ten healthy subjects (HS) were enrolled in a single day intervention study. All subjects consumed a test meal, recorded their appetite sensations, and blood was collected over three hours after meal consumption. The study found a lower decrease in hunger in CeDD compared to CeDGF and HS after meal intake. Data showed no difference of fullness and satiety between the groups. CeDD had lower insulin and glucose-dependent insulinotropic polypeptide (GIP) than CeDGF and HS. Both CeDD and CeDGF experienced a lower post-prandial response of glucose than HS. Data suggested that patients with CeD have an impaired glucose absorption after more than 12 months of gluten-free diet. Postprandial GIP may play a significant role in appetite cues and insulin response to a complex meal. View Full-Text
Keywords: coeliac disease; appetite; ghrelin; glucagon-like peptide-1; gluten-free diet; ghrelin coeliac disease; appetite; ghrelin; glucagon-like peptide-1; gluten-free diet; ghrelin
►▼ Show Figures 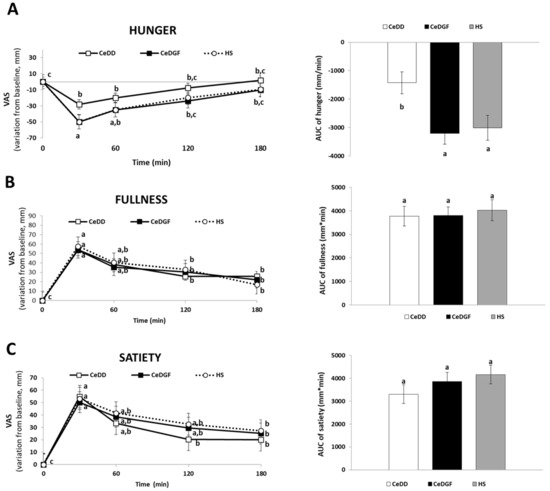