Wholegrain Intake and Risk of Type 2 Diabetes: Evidence from Epidemiological and Intervention Studies

Breastfed infants have a growth pattern different from formula fed infants. They grow more rapidly during the first 1–2 months (mo) and then more slowly—both weight gain and linear growth—in the first years [1,2,3]. There are also differences in body composition as breastfed infants accrue more fat than formula fed infants during the first 6 mo [4]. However, there is emerging evidence that human milk (HM) composition has an effect on growth, and some of the differences in growth within breastfed infants can be explained by differences in milk composition [5,6]. Recently there is emerging evidence that concentrations of the two hormones leptin and adiponectin in breast milk are related to appetite and infant growth [5,7].
Some infants experience excessive weight gain (EWG) during the period they are exclusively breastfed (EBF) and have a marked catch-down when complementary foods are introduced, suggesting that the EWG is caused by breastfeeding [8,9,10]. Studies investigating this group of infants are sparse and little is known about causes for the rapid weight gain and potential consequences. In the two case reports [8,9] it is suggested that a high protein intake is the cause. In an observational cohort study of 73 infants with EWG during EBF the growth pattern was different from the case reports because growth velocity continued to be high, also after complementary foods were introduced [11].
There is convincing evidence from several meta-analyses that a high weight gain during infancy, especially the first six months, is associated with an increased risk of overweight, obesity, and metabolic complications later in life [12,13,14,15]. However, most of these meta-analyses did not analyze the risk according to early feeding method. There is some evidence that breastfeeding reduces the risk of later overweight and obesity [16], but it is highlighted that observed associations could be due to residual confounding or reverse causation [17,18]. In a prospective population-based birth cohort study including 3000 children, overweight in infancy (≥1 standard deviation (SD) body-mass-index (BMI)-for-age (BAZ)) was associated with increased odds of childhood overweight regardless of feeding mode [19].
Although the case reports suggest that at least some breastfed infants with EWG show catch-down growth when other foods are introduced, it is important to examine if these infants are at risk of later obesity and metabolic complications. A small exploratory cohort of infants with EWG during EBF was established in order to identify predictors and consequences of the EWG and a cohort with normal weight gain was recruited for comparison.

Participants were part of an ongoing prospective observational cohort study, the SKOT III cohort, consisting of two groups; a high weight gain group (HW-group) and a normal weight gain group (NW-group).
EBF infants considered to have excessively high weight-for-age were referred via Danish health workers who had been informed about the study through postal letters and social media from August 2015 to October 2016. High weight was defined as infants aged 4–6 mo having a weight-for-age z-score (WAZ) >2.00. The infants were qualified for enrollment to the HW-group if they had an increment of at least +1 SDS in WAZ within the first 5 mo postpartum. The NW-group was recruited through the National Civil Registry. Families from the Copenhagen area (n = 805) with infants born between 15 July 2016 and 31 August 2016 were invited by postal invitation to participate. Inclusion criteria for the NW-group were infants aged 4–6 mo with a WAZ between −1.0 and +1.0 SDS. Other inclusion criteria were similar for both groups: exclusively or fully breastfed (defined as receiving HM as their primary energy intake but were allowed to have water, vitamins, minerals and a maximum of one meal of formula per week) for at least 4 mo. At first visit the infants were to be 5–6½ mo old and have breastfeeding as the primary energy source not receiving more than two meals of solid food per day. Both HW- and NW-group mother-infant dyads were examined at infant’s age 5–6½ mo and 9 mo ± 2 weeks, and the HW-group further at 18 mo ± 4 weeks.
The study protocol was approved by the Regional Ethical Committee of the Capital Region of Denmark in accordance with the Helsinki declaration (H-15008948) and the Data Protection Agency (2015-57-0117 & 2015-57-0116) and written informed consent was obtained from parents.

Mothers were instructed to use an electronic baby weighing scale (Tanita BD 815 MA, Tanita Corporation, Tokyo, Japan) for weighing their infants to measure the 24 h milk intake at 5 mo. For a period of 72 h mothers weighed their infants before and after each breastfeeding-session (each feed) without change in clothing or diaper. Calculation of intake in grams was done by subtracting weight of the infant before the feed from the weight after the feed. In cases where test weighing was not completed for all feeds, the intake was estimated using an average of intake per feed calculated from the mother’s registration. The first feed after the 72 h period was used as the end point for registration period, and in cases where these data were missing it was estimated from the three previous days. A corrected 24 h milk intake for each infant was determined by dividing the intervals in hours and multiplying by 24. No correction for infant insensible water loss was made, and therefore the milk intake is likely to be underestimated by 3–10% [22,23]. Feeding frequency and duration of each feed was derived from the test weighing report. Energy intake from foods and drinks other than HM was calculated using Dankost (Dankost version 3000, Dankost Ltd., Copenhagen, Denmark).

At the 5 and 9 mo visits the mothers were asked to collect 10 mL foremilk and 10 mL hind milk from either breast and on a second time point to complete expression of both breasts. Samples were collected in their homes in disposable bottles (2 × 80 mL/2 × 250 mL) using a manual breast pump (Type Harmony™, Medela AG, Baar, Switzerland) and stored at −20 °C. The samples were transported in a bag with an ice pack and stored at −80 °C.
HM analysis were carried out in one mixed sample of a full expression of right and left breast. Macronutrient and energy content was analyzed by mid-infrared spectroscopy using the HM analyzer (MIRIS HMA; Miris AB, Uppsala, Sweden). The analysis was performed according to manufacturer’s instructions. The milk was heated to 40 °C and homogenized by ultrasonic processing before injected into the system.
Biochemical analyses of milk leptin, adiponectin, lysozyme, sIgA and lactoferrin were carried out at the University of Western Australia. Milk adiponectin concentration was determined by Enzyme-Linked Immunosorbent Assay (ELISA) kits (RD191023100, BioVendor-Laboratorni medicina a.s., Brno, Czech Republic). Milk leptin (m-leptin) concentration was determined by the R&D systems leptin DuoSet ELISA kit (DY398, R&D Systems Inc., Minneapolis, MN, USA). The recovery of a known amount of leptin added to the milk samples was 97 ± 3.0% (n = 4). The detection limit of this assay was 0.016 ng/mL. Milk lactoferrin and secretory immunoglobulin A (sIgA) were measured with a sandwich ELISA method as previously described by Czank et al. [24]. Lysozyme concentration was measured with a modified turbidimetric assay [25]. Details on the methods are included in Appendix A2; Supplemental method description.

Venous blood samples (10 mL) were taken at 5 and 9 mo visits. Local anesthetic patches (EMLA, AstraZeneca AB, Södertälje, Sweden) and instructions were given to the parents before first visit. If possible, infants were fasting 2 h before blood samples were taken and the time, amount and composition of last meal were recorded. Methods for blood analyses are described in Appendix A3; Supplemental method description.

2.7. Feeding Patterns and Other Information

Statistical analyses were carried out using STATATM12 (Stata Corporation, College Station, TX, USA). Significance was defined as p-value < 0.05. Parametric descriptive results are presented as means and SD, or mean and range. Independent t-test was used to test differences between the characteristics of the two study groups. Differences between groups for the anthropometric measures and blood parameters adjusted for sex (glucose, insulin, leptin, and Insulin-like Growth Factor-1 (IGF-I) and fasting time (glucose and insulin) were analyzed by general linear models. Non-normally distributed variables are presented as medians with interquartile range (IQR: 25th and 75th percentile), and Mann-Whitney U test used for comparing the study groups. Categorical variables are presented as number and percentage and comparisons were performed using Fisher’s exact test. Associations between the different macronutrients, between macronutrients/hormones and WAZ, BAZ and LAZ change, and between mothers BMI and milk composition were investigated by linear regression, for the groups separately and combined.

At 5 mo there were no significant associations between milk concentrations of macronutrients, energy and hormones and infant’s anthropometry (WAZ, BAZ or leight-for-age z-scores (LAZ)) or change in these z-scores from birth to the 5 mo visit (all p > 0.11, data not shown).

In conclusion, our exploratory study suggests that leptin could influence the early EWG and later catch-down in the HW-group but the mechanisms are not known. There is a need to explore this in future studies, especially to understand how leptin is influencing early postnatal growth. The very high weight gain in the HW-group might increase the risk of later overweight and obesity and metabolic complications. The mean BAZ value was within the higher normal range at 18 mo, but three infants still had a BAZ above +2. Thus, it seems like at least some of the infants with a very high infant weight gain reach a weight within the normal range within the following years. In that perspective, it is interesting that in a large study, measuring BMI at 8 to 10 years, there was a highly significant inverse association between s-leptin values in infancy and childhood BMI suggesting a programming effect [56]. Another important finding is that we observed no differences between the groups in many metabolic parameters, including blood lipids, liver parameters and inflammation markers at 5 or 9 mo, suggesting that there were no major metabolic disturbances in the HW-group. However, long-term follow up is needed to assess the long-term risk of overweight and obesity in these infants.

We are very grateful to the families participating in the SKOT III cohort study. We are also thankful to Birgitte Hermansen and Vivian Anker, technical staff of the Department of Nutrition, Exercise and Sports, for their involvement and enthusiasm in the data collection. We also thank Ash Tie from Hartmann Human Lactation Research Group, University of Western Australia, Perth, Australia for the contribution to HM analysis.

The infant was placed on an examination couch without wearing metal or any persons touching the skin of the infant. The signal electrodes were placed on the right hand behind the knuckle of the middle finger and on the right foot behind the toe next to the big toe. The detecting electrodes were placed on the right wrist next to the ulna head and on the right ankle between the medial and lateral malleoli. The bioimpedance measurements were then performed.
Details on Lingwood equation:
(W = weight in kg, S = sex, L = length, R50 = impedance variable)
Fat mass (FM) was calculated as weight − FFM and %FM = 100(W − FFM)/W. Fat free mass index (FFMI) and fat mass index (FMI) was calculated using the following equations:

Skim milk samples were diluted 10-fold with 0.1 M of Na2 HPO4/1.1 mM of citric acid (pH 5.8) buffer. Twenty-five microliters of standards or diluted skim milk samples were placed into the wells of a plate (Greiner Bio-One, Frickenhausen, Germany). A 175 μL of Micrococcus lysodeiltikus suspension (0.075% w/v, ATCC No. 4698, Sigma, St. Louis, MA, USA) was added into each well and plate was incubated on a shaker at RT for 1 h. The absorbance was measured at 450 nm. 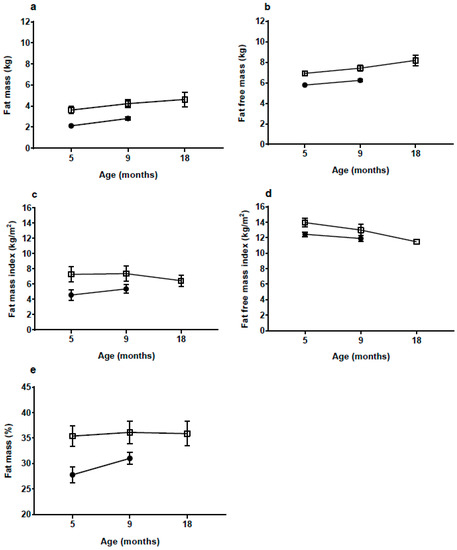 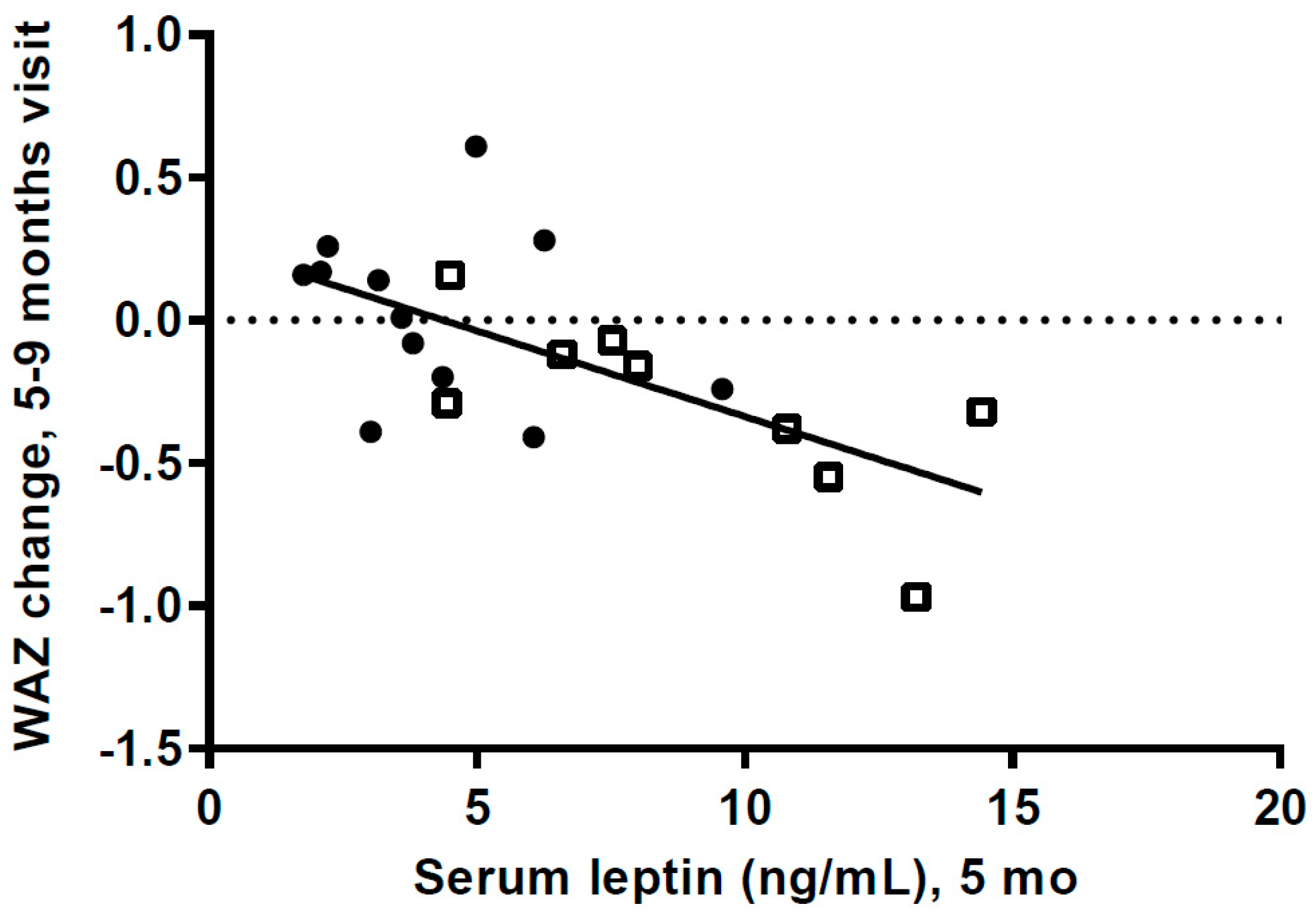