Selenium is an essential trace element involved in the defense against oxidative stress as a key component of glutathione peroxidase (GPx) and other selenoenzymes. Excess adiposity, even at low levels of overweight and obesity, has been associated with increased oxidative stress [1,2,3,4,5] and with decreased activity of antioxidant enzymes including GPx [6]. Excess adiposity may thus represent a pro-oxidative and pro-inflammatory state that increases requirements for selenium and other antioxidants and may lead to long-term changes in selenium levels. In addition, a number of reports have shown independent associations between increasing serum selenium and the prevalence of a variety of cardiometabolic outcomes such as diabetes [7,8], dyslipidemia [9,10,11], and hypertension [12], all linked to excess adiposity.
Since excess adiposity may affect both selenium levels and cardiometabolic endpoints, it is important to understand the relationship between adiposity (both general and central) and serum selenium to interpret any apparent metabolic effects of selenium. Studies of the association between adiposity and selenium, however, have been scarce and are largely limited to body mass index (BMI). In the U.S. Third National Health and Nutrition Examination Survey (NHANES III) [13], overweight and obesity were associated with low serum selenium (defined as <100 ng/mL) in both premenopausal women and men < 65 years of age, but detailed dose–response relationships and the role of central obesity were not considered. In the French Supplémentation en Vitamines et Minéraux Antioxydants (SU.VI.MAX) study [14], obesity (BMI ≥ 30 kg/m2) was associated with decreased serum selenium levels, but only in women.
The objective of our analysis was thus to evaluate the association of adiposity with serum selenium taking into account measures of both general adiposity (BMI and percent body fat (%BF)) and central adiposity (waist circumference (WC)) in the general U.S. adult population, a selenium-replete population.

NHANES III, a complex multistage survey, was aimed at obtaining a nationally representative sample of the non-institutionalized U.S. population from 1988 to 1994. Among 17,030 individuals aged 20 years and older who participated in the household interview and medical examinations, we excluded 61 participants with missing BMI values, 1248 with missing WC values, 1277 with missing bioelectrical impedance measurements, 847 with missing serum selenium levels, and 308 missing other covariates of interest. The final sample included 13,289 participants (6440 men and 6849 women). The Centers for Disease Control and Prevention (CDC) Institutional Review Board approved the NHANES III protocols and all participants provided written informed consent.

Participants underwent a standardized home interview by trained interviewers and a standardized physical examination at the Mobile Examination Center [15,16]. Weight was measured with an electronic load-cell scale and recorded in kilograms to two decimal places while the participants were wearing only a paper examination gown with paper pants and foam slippers. Standing height was measured to the nearest 0.1 cm by using a stadiometer. BMI was calculated by dividing weight in kilograms by standing height in meters squared. WC was measured at the high point of the iliac crest by using a measuring tape in a standing position, and recorded to the nearest 0.1 cm.
Bioelectrical impedance analysis (BIA) was conducted as a single tetrapolar measurement of resistance and reactance at 50 kHz taken between the right wrist and ankle in the supine position using a Valhalla 1990B Bio-Resistance Body Composition Analyzer (Valhalla Scientific, San Diego, CA, USA) [17]. Fat-free mass (FFM) was estimated using a validated prediction equation [18,19]: Males: FFM = −10.678 + 0.262 weight + 0.652 height2/resistance + 0.015 resistance; Females: FFM = −9.529 + 0.168 weight + 0.696 height2/resistance + 0.016 resistance. Total body fat (TBF) was estimated as the difference between weight and FFM, and %BF was estimated as (TBF/weight) 100%.

During the examination, fasting whole blood was collected from study participants in containers previously screened for selenium contamination. After clotting, specimens were centrifuged, and serum was harvested, frozen at −20 °C, and shipped to the NHANES Laboratory, Nutritional Biochemistry Branch, Division of Environmental Health Laboratory Sciences (EHLS), National Center for Environmental Health (NCEH), CDC. Serum selenium was measured by Zeeman atomic absorption spectrometry [20,21]. The limit of detection was 8 ng/mL. All participants had serum selenium concentrations above the limit of detection. The interassay coefficients of variation for serum selenium ranged from 4.0 to 6.4% throughout the study period. Detailed descriptions of laboratory procedures and quality control methods for serum selenium measurements are available elsewhere [22].

Information on age, sex, race/ethnicity, education, menopausal status, smoking, physical activity, and antihypertensive medication was based on interview questionnaires. Leisure-time physical activity in the past month was ascertained during the home interview. Physical activities were coded and classified according to the rate of energy expenditure using a standardized scheme [23]. Sedentary lifestyle was defined as no moderate or vigorous physical activities performed in the past month. Never smokers were defined as participants who reported having smoked < 100 cigarettes during their entire lives. Current smokers were defined as participants who had smoked ≥ 100 cigarettes and reported that they were smoking now or had serum cotinine levels ≥ 10 ng/ml. Former smokers were defined as participants who had smoked ≥100 cigarettes but were not current smokers. Serum cotinine was measured by isotope-dilution high-performance liquid chromatography/atmospheric pressure chemical ionization tandem mass spectrometry. Blood pressure was the average of up to six measurements conducted during the in-home interview and at the mobile examination center according to the standard protocol recommended by the American Heart Association.
Serum C-reactive protein (CRP) was measured by latex-enhanced nephelometry (Behring Diagnostics Inc., Somerville, NJ, USA), which is a low-sensitivity assay, and grouped in three categories (<0.3 (limit of detection), ≥0.3 to <1, ≥1 mg/dL). Serum total cholesterol and triglycerides were measured enzymatically by using a Hitachi 704 Analyzer (Boehringer Mannheim Diagnostics, Indianapolis, IN, USA). High density lipoprotein (HDL) cholesterol was measured following the precipitation of other lipoproteins with a polyanion/divalent cation mixture. Plasma glucose was measured using a hexokinase enzymatic method. Diabetes was defined as a fasting glucose ≥6.99 mmol/L, a non-fasting glucose ≥11.1 mmol/L, or a self-report of a prior diagnosis of diabetes with concurrent use of oral hypoglycemic agents or insulin [22].

We categorized BMI, %BF, and WC into sex-specific quartiles, and performed all analyses stratified by sex. Multivariable linear regression was used to calculate the difference in serum selenium comparing BMI, %BF, and WC quartiles to the first quartile. Model 1 was adjusted for age (continuous) and race/ethnicity (non-Hispanic white, non-Hispanic black, Mexican American, other). Model 2 was further adjusted for education (<12 years, ≥12 years), smoking (never, former, current), serum cotinine (continuous), sedentary lifestyle (yes, no), and postmenopausal status for women (yes, no). Model 3 was further adjusted for diabetes (yes, no), CRP (<0.3, ≥0.3 to <1, ≥1 mg/dL), systolic blood pressure (continuous), antihypertensive medication (yes, no), total cholesterol (continuous), triglycerides (continuous), and HDL-cholesterol (continuous). In addition, the findings for BMI and %BF quartiles were further adjusted for WC (Model 4), and the findings for WC quartiles were adjusted for BMI (Model 4a) or by %BF (Model 4b). Tests for linear trends were obtained by including the medians for each category of BMI, %BF, and WC as continuous variables in the regression models.
To evaluate more detailed dose–response relationships, we modeled BMI, %BF, and WC using restricted quadratic splines with knots at the 5th, 50th, and 95th percentiles to provide a smooth yet flexible description of the relationship of BMI, %BF, and WC with selenium. All analyses were performed in STATA (version 12, Stata Corp LP, College Station, TX, USA) using the “svy” commands to account for the complex study design and sampling weights of NHANES III.

The average BMI, %BF, and WC values of study participants were 26.6 kg/m2, 24.0%, and 95.4 cm, respectively, among men, and 26.4 kg/m2, 35.1%, and 88.5 cm, respectively, among women. The average concentrations of serum selenium were 127.2 ng/mL in men and 124.5 ng/mL in women. Generally, men had higher levels or percentages than women for current smokers, systolic blood pressure, serum cotinine, and serum triglycerides, but had lower levels or percentages for level of education, sedentary lifestyle, antihypertensive medication, serum C-reactive protein, serum total cholesterol, and serum HDL-cholesterol (Table 1).

In multivariable adjusted models, higher BMI was associated with lower serum selenium concentrations in both men and women. The average difference in serum selenium between the highest and lowest quartile of BMI was −4.0 ng/mL (−5.5 to −1.6 ng/mL) in both men and women (Table 2, Model 3). After further adjustment for WC, the inverse association between BMI and selenium was stronger in men but somewhat weaker in women (Table 2, Model 4). Spline regression models confirmed that serum selenium concentrations decreased with increasing BMI, even after adjusting for WC (Figure 1).

With respect to %BF, multivariable adjusted models showed a strong inverse association with serum selenium in women, but only a weak and non-significant association in men. The average differences in serum selenium between the fourth and the first quartiles of %BF were −1.7 ng/mL (−4.2 to 0.7 ng/mL) in men, and −4.5 ng/mL (−7.0 to −1.9 ng/mL) in women (Table 3, Model 3). The inverse association in women was still evident after adjustment for WC (Table 3, Model 4) and in spline regression models (Figure 1).

In multivariable adjusted models, higher WC was inversely associated with serum selenium in both men and women. The average differences in serum selenium between the fourth and the first quartiles of WC were −1.9 ng/mL (−3.8 to −0.1 ng/mL) in men, and −3.9 ng/mL (−5.8 to −2.0 ng/mL) in women, respectively (Table 4, Model 3). After adjustment for either BMI or %BF, the inverse association in both men and women became non-significant (Table 4, Models 4a,b). Spline regression models confirmed that serum selenium concentrations decreased with increasing WC (Figure 2, Model 3), but not after adjustment for BMI, which discrepantly presented a positive trend in men and a non-significant trend in women (Figure 2, Model 4a).

Q.Z. and R.L. designed the research and wrote the manuscript; R.L. and Q.N. analyzed the data; Q.Z., R.L., and Q.N. reviewed and edited manuscript. All authors read and approved the final manuscript.

We gratefully thank Yiyi Zhang for the excellent technical assistance in data analysis and acknowledge Eliseo Guallar for valuable discussion in all phases of this manuscript, Margaret Rayman and Saverio Stranges for constructive comments on this manuscript. 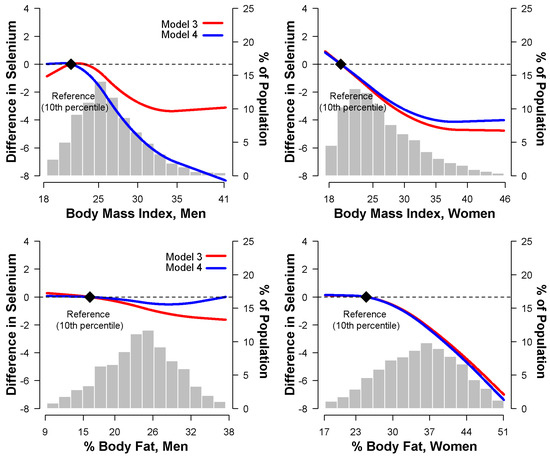