Adult stem cell differentiation is a complex process that is heavily influenced by tissue origin and interaction with the cellular microenvironment [1]. Bone marrow stromal cells (BMSCs) are mesenchymal lineage cells that can differentiate into a number of different cell types including osteoblasts, osteocytes, adipocytes, and chondrocytes [2,3]. The differentiation pathway of BMSCs depends in large part on their niche/microenvironment [1]. Targeted gene reprogramming is vital to direct BMSCs toward specific lineages in the field of tissue-engineering. One potential strategy in this regard employs various micronutrient supplements such as amino acids and vitamins to guide BMSC differentiation.
Micronutrients, including vitamin C, are important factors in musculoskeletal development and BMSC biology [4,5,6,7,8,9,10,11,12,13,14,15]. For example, vitamin C is a key player in collagen synthesis, cell proliferation, and BMSC differentiation [9,10,11,12,13,14,15]. Moreover, vitamin C acts as an antioxidant and prevents oxidative damage of cellular macromolecules. Vitamin C is an essential nutrient that is not synthesized by most mammals including humans [16,17,18] because of a mutation in gulonolactone oxidase (GULO) enzyme. GULO is an important catalyzing enzyme which helps in the conversion of l-gulono-g-lactone into ascorbic acid [17,18]. Human clinical and animal studies have demonstrated that a deficiency of this vitamin leads to musculoskeletal deformities [19,20]. Therefore, dietary supplementation of vitamin C is essential for the normal function of BMSCs. Vitamin C stimulates BMSC differentiation by induction of differentiation-specific genes such as Collagen type 1, RUNX2, and ALP [11]. Furthermore, vitamin C is also known to regulate human embryonic stem cell differentiation through epigenetic regulation [21,22].
The role of vitamin C in mesenchymal and embryonic stem cell differentiation has been investigated extensively [21,22,23,24]. It is well-established that vitamin C can alter gene expression in embryonic stem cells through epigenetic regulation by directly regulating Tet activity and DNA methylation [19,20,22,23]. Epigenetic regulation is a mechanism in which there is change in gene regulation without change in genetic makeup [25]. Epigenetic factors such as DNA methylation and microRNAs are known for their roles in BMSC differentiation and musculoskeletal development [26,27,28,29,30,31]. Vitamin C and its role in DNA methylation have been well-studied in different biological systems [32,33,34,35,36,37] but not much is known with regard to miRNA and vitamin C. MicroRNAs are small, non-coding, endogenous, single stranded RNAs comprised of 22 nucleotides that bind to the 3′ untranslated region of target messenger RNA (mRNA) [38,39]. MicroRNA negatively regulates gene expression at the post-transcriptional level by degrading mRNA or by inhibiting translation [38,39]. It has been reported in a number of studies that miRNA regulates almost all cellular events including cell proliferation, differentiation, and development [40,41,42,43]. Vitamin C-dependent miRNA gene regulation has not been studied previously in human BMSCs. For this study, we collected human bone marrow and isolated bone marrow stromal cells. The osteogenic and adipogenic differentiation properties of the cells were analyzed. The BMSCs were treated with vitamin C followed by miRNA array. The selected miRNAs were further conformed using real time-polymerase chain reaction polymerase chain reaction (PCR). Bioinformatics analyses were performed on differentially expressed miRNAs to identify novel target genes and signaling pathways. Our data demonstrated that vitamin C regulates a number of miRNAs and plays an important role in various stem cell-signaling pathways.

The microRNA array was performed only on samples treated with the high dose (100 µM) of vitamin C. miRNAs were isolated using an miRNA isolation kit (SABiosciences Corporation, Frederick, MD, USA) that specifically captures small RNAs with length of less than 200 nucleotides as per the manufacturer’s protocol. RNA concentrations were determined using a NanoDrop 1000 Spectrophotometer (NanoDrop Technologies, Wilmington, DE, USA). The quality of RNA samples was characterized on an Agilent BioAnalyzer (Agilent Technologies, Santa Clara, CA, USA) using an RNA6000 Nano Chip (Agilent). Microarrays were performed on miRNA using an Affymetrix GeneChip® miRNA 2.0 array at the Integrated Genomics Core, Augusta University, GA, USA. Details of the procedure can be found online at http://www.augusta.edu/cancer/research/shared/genomics. The miRNA profile was analyzed for hierarchical clustering of miRNA to generate heat maps. The results were normalized using robust multichip averages. T-tests were used to calculate the p-value to determine whether there is a significant difference for miRNA expression between the control and the treatment groups. Principal component analysis (PCA) was performed between vitamin C treatment and control samples. Gene Ontology (GO) and Kyoto Encyclopedia of Genes and Genomes (KEGG) signaling pathway analyses were performed using DIANA-miRPath v. 3.0 (http://diana.imis.athena-innovation.gr/DianaTools/index.php) on differentially expressed microRNAs target genes. GO word clouds were generated using the online Wordle software (www.wordle.net). Bioinformatics software (http://www.targetscan.org/vert_71/ and http://www.mirdb.org/) was used to predict targets genes of differentially regulated miRNAs of musculoskeletal importance.
Validation of miRNA using real time-PCR: Two hundred nanograms of enriched small RNA were converted into cDNA using RT2 miRNA First Strand Kit (SABiosciences Corporation, Frederick, MD, USA). Fifty picograms of cDNA were amplified in each qRT-PCR using syber green dye and miRNA specific primers. The real-time qRT-PCR was performed on a Bio-rad q-pcr machine with following cycling parameters: 95 °C for 10 min, then 40 cycles of 95 °C for 15 s, and 60 °C for 30 s. SYBR Green fluorescence was recorded during the annealing step of each cycle. The average of RNU6 (RNA, U6 small nuclear 2) and SNORD (small nucleolar RNA, C/D box) was used as normalization reference genes for miRNAs. Relative expression of miRNA was evaluated by using the comparative cycle threshold (CT) method (ΔΔCt).

Supplementation of vitamin C is required for the differentiation of hBMSCs but the dose of vitamin C supplementation is debatable. To gain further insight into the dose of vitamin C in the human bone marrow stromal cell culture system, we treated cells with either a low (25 µM) or a high (100 µM) doses of vitamin C for 6 days followed by real time PCR on musculoskeletal related genes. A higher dose of vitamin C treatment showed the most significant changes in expression of those genes related to osteogenic differentiation. Specifically, COL-II and BMP2 were increased three-fold (p = 0.001), where BMP-7, RUNX2 and Osterix (OSX) were up-regulated approximately four-fold (p = 0.001) at a higher dose compared to control (Figure 2). Lower doses of vitamin C did not show significant changes (Figure 2). We also quantified intracellular accumulation of vitamin C following vitamin C treatment after 6hrs. We found significantly (p = 0.001) higher concentration of intracellular vitamin C compared to the control (Figure 2f).

To identify miRNAs that were differentially expressed following vitamin C treatment, we conducted a comprehensive miRNA microarray analysis of samples from hBMSCs that were treated with or without vitamin C. miRNAs were isolated after 6 days post treatment. The miRNAs that exhibited a significant (p < 0.05) 1.5-fold difference in expression after vitamin C treatment compared with the control groups were selected for analysis. Our analysis identified 122 miRNAs that were differentially expressed (p < 0.05) in response to vitamin C. Out of 122 miRNAs, 80 miRNAs were up-regulated and 42 were down-regulated in the presence of vitamin C. The list of up-regulated and down-regulated miRNAs after vitamin C treatment is shown in Table 1. Hierarchical cluster analysis using the normalized miRNA expression data confirmed that the expression of miRNAs in vitamin in C treated BMSCs can be clearly distinguished from the controls (Figure 3).

We performed a PCA to explore the relationships between the control and vitamin C-treated samples. The PCA graph (Figure 3) shows the presence of the cluster of vitamin C treatment samples that is clearly distinct from the control (non-treated) samples.

We performed Kyoto Encyclopedia of Genes and Genomes (KEGG) pathway annotation and GO analysis to identify functions of the miRNAs found to be differentially expressed after vitamin C treatment. The KEGG annotation analysis showed that a number of molecules are affected by these miRNAs. Interestingly, up-regulated and down-regulated miRNAs both regulate some common signaling pathways such as cell adhesion molecules (CAMs), fatty acid biosynthesis/metabolism and thyroid hormone signaling pathway. The important KEGG signaling for up-regulated miRNAs are Mucin type O-Glycan biosynthesis, glycosphingolipid biosynthesis, biotin metabolism and arrhythmogenic right ventricular cardiomyopathy (ARVC) and down-regulated are amino sugar and nucleotide sugar metabolism, endocytosis, MAPK signaling pathway, GABAergic synapse, and glutamatergic synapse. Details of KEGG annotation analysis are shown in Table 2.
The gene ontology analysis showed that more than 87 biological processes were associated with the down- and up-regulated miRNAs (Table 3). The most common GO pathways regulated by both up-regulated and down-regulated miRNAs are organelles, biosynthetic processes, cellular protein modification process, enzyme binding, cellular component assembly and nucleic acid binding transcription factor activity. Details of the GO analyses are shown in Table 3. Wordle-based clouds were generated for both up-regulated and down-regulated pathways from the GO analysis to identify most prominent vitamin C-dependent, miRNA-mediated signaling pathways (Figure S2). Word clouds demonstrate the font size depending on relative word frequencies in the GO analysis [46].

To our knowledge, our study is the first report to identify vitamin C-dependent differential novel miRNA expression in hBMSCs. We also provide new data linking these miRNAs to key signaling pathways involved in BMSC biology. We believe our study is a key step in gaining a greater understanding of how vitamin C contributes to hBMSC biology through the miRNA signaling network. Our study has some limitations. For example, we performed the study only on human bone marrow derived stromal cells, and the vitamin C-dependent miRNA regulation in adipose-derived stem cells could potentially differ somewhat from hBMSCs. Similar studies need to be performed on different stem cells originating from other tissue types. Furthermore, we performed our study only at one-time point (six-day) after treatment with vitamin C. It is important to know both the short and long term effects of vitamin C on BMSCs. Future work by our group will focus on validating the predicted miRNA targets and their role in vitamin C-dependent tissue engineering and musculoskeletal development.

This publication is supported in part by the National Institutes of Health (NIA-AG036675-06A1, CI, WDH, and MWH).

The author declares no conflicts of Interest. 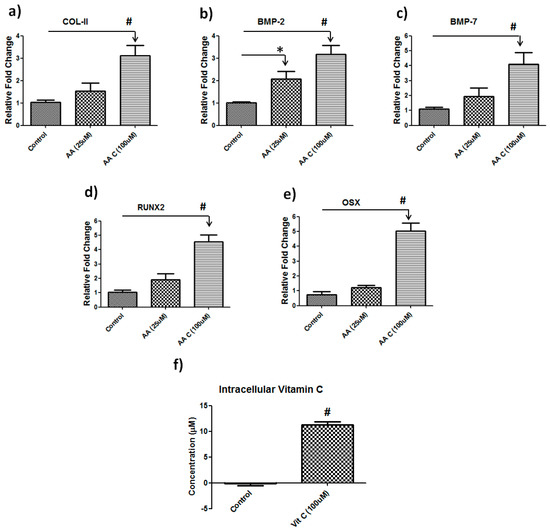 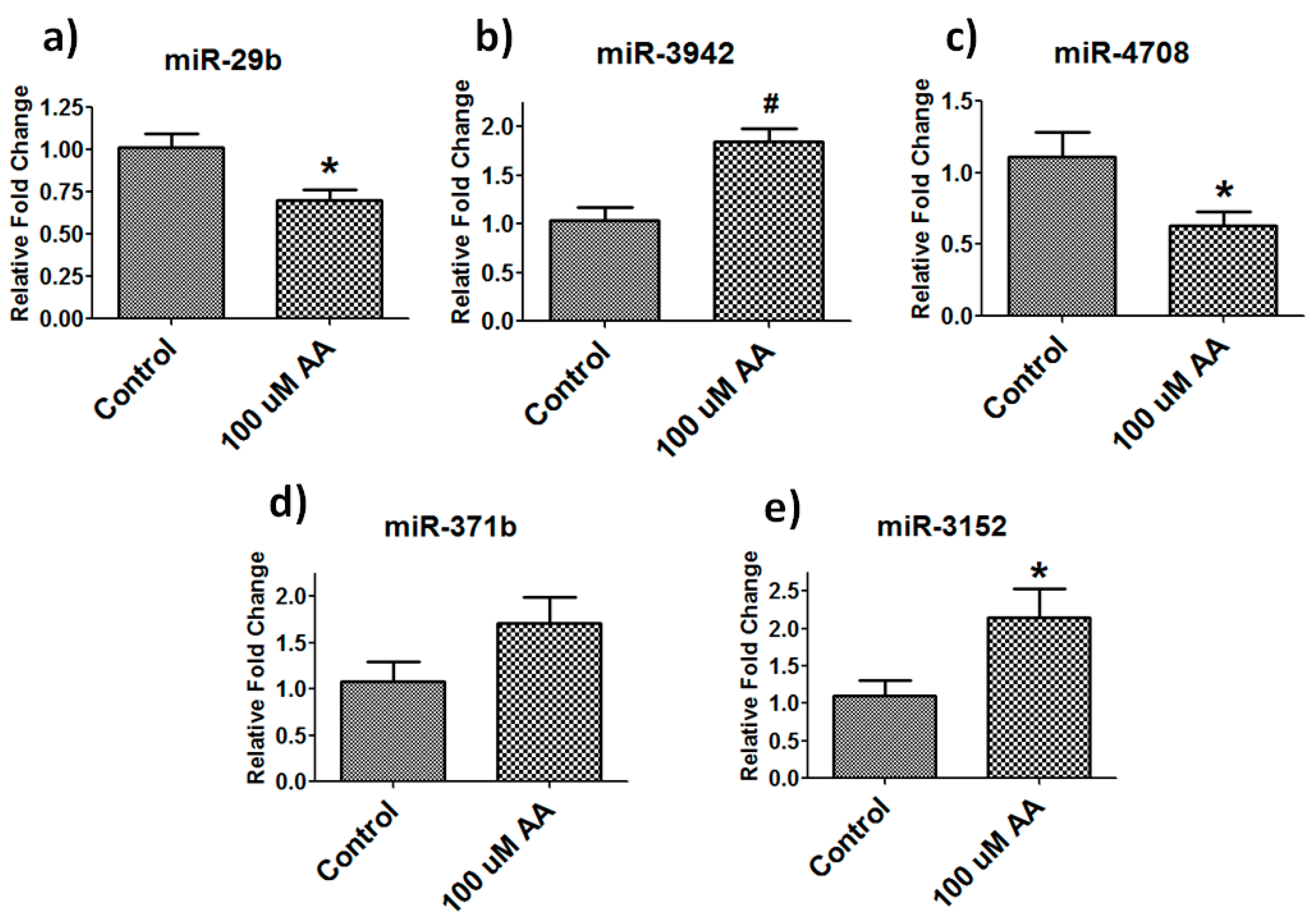