Plant flavonoids have a variety of biological properties. In a previous study, we found that the tea of the Asian dayflower, Commelina communis L., decreased the body weight gain in high-fat diet-fed mice. In this study, we studied the anti-adipogenic ability of a flavonoid orientin that is found in abundance in C. communis. Orientin repressed the accumulation of intracellular triglyceride (TG) in mouse adipocyte 3T3-L1 cells. The treatment with orientin also decreased the mRNA levels of the genes involved in adipogenesis, lipogenesis, lipolysis, and TG synthesis, and reduced the release of glycerol. Orientin lowered the expression of CCAAT/enhancer binding protein (C/EBP) δ in the early stage of adipogenesis, leading to a decrease in the expression of the adipogenic master transcription factors such as peroxisome proliferator-activated receptor (PPAR) γ and C/EBPα. Moreover, the anti-adipogenic effect of orientin repressed the phosphorylation of Akt and subsequent phosphorylation of forkhead box protein O1 (FOXO1), which inhibits the transcription of the Ppar gene. These results indicate that a plant flavonoid orientin suppressed the expression of the Pparγ gene through repression of C/ebpδ expression and inhibition of the phosphoinositide 3-kinase /Akt-FOXO1 signaling in adipocytes.
Keywords: adipogenesis; orientin; C/EBPδ; PI3K/Akt; FOXO1 adipogenesis; orientin; C/EBPδ; PI3K/Akt; FOXO1

Obesity is now a global health problem in developed and developing countries [1], and increases the incidence of metabolic diseases such as cardiovascular diseases and type II diabetes [1,2,3]. Obesity is thought to be attributed to a number of factors such as unhealthy eating habits, aging, and lack of exercise. Obesity is associated with increases in cell size and cell number of adipocytes, which are derived from an imbalance between energy intake and energy expenditure. Adipocytes are specialized cells that store energy as lipids and when needed, the stored lipids are hydrolyzed and oxidized to control energy balance in the body [4]. Moreover, fat tissue is now known as an endocrine organ that produces a variety of adipocytokines [5].
Adipocyte differentiation (adipogenesis) is controlled via complex processes, and a number of transcription factors involved in its regulation have been found [6]. Among them, three transcription factors, peroxisome proliferator-activated receptor (PPAR) γ, CCAAT/enhancer binding proteins (C/EBPs), and sterol regulatory element-binding protein-1, are important in the regulation of adipogenesis [6]. Moreover, C/EBPβ and C/EBPδ, which are the transcription factors acting in the early stage of adipogenesis, enhance the transcription of C/ebpα and Pparγ genes to activate the terminal differentiation of adipocytes [7]. Furthermore, once PPARγ and C/EBPα are activated, they enhance gene expression of each other and then induce the expression of various adipogenic genes that are needed for maintaining adipocyte characteristics and terminal differentiation.
Flavonoids are natural polyphenolic compounds derived from fruits and vegetables [8]. There are many studies about their biological properties such as anti-inflammatory, anti-cancer, antioxidant, and anti-obesity effects [8]. Commelina communis L., Asian dayflower has been used in Chinese medicine [9,10], because it contains various chemical constituents such as flavonoids, terpenes, and, alkaloids, and has a variety of biological properties such as anti-inflammation, anti-obesity, and antioxidation. 1-deoxynojirimycin and (2R, 3R, 4R, 5R)-2,5-bis(hydroxymethyl)-3,4-dihydroxypyrrolidine in C. communis inhibit α-glucosidase activity [9]. In a previous study, we found that C. communis tea decreased body weight gain in high-fat diet-fed mice, and that glucoluteolin (luteolin-7-O-glucoside) purified from C. communis suppressed glucose uptake in adipocytes [11]. 8-β-d-Glucopyranosyl-3′,4′,5,7-tetrahydroxyflavone (orientin; Figure 1A) is one of the major constituents in C. communis. Orientin has various medicinal properties [12] and has been reported to decrease intracellular triglyceride (TG) accumulation by inhibiting the expression of C/EBPα and PPARγ [13]. However, the molecular mechanism of inhibition of adipogenesis by orientin has never been elucidated.
In this study, we investigated the molecular mechanism by which orientin purified from C. communis suppresses adipogenesis in mouse adipocyte 3T3-L1 cells. We found, for the first time, that orientin reduces the intracellular lipid accumulation by suppressing PPARγ activity via downregulating the expression of C/EBPδ and inhibiting the phosphoinositide 3-kinase (PI3K)/Akt-forkhead transcription factors of class O1 (FOXO1) signaling in the early stage of adipocyte differentiation.

2.2. Purification of Orientin from C. communis

Orientin was purified from aerial parts of C. communis as described previously [11].

Cell culture was performed for 6 days in medium with various concentrations of orientin (0–50 μM). The medium containing orientin was changed every 2 days. Cytotoxicity was measured by WST assay with a Cell Counting Kit-8 (DOJINDO, Kumamoto, Japan).

Confluent 3T3-L1 cells were differentiated into adipocytes in medium containing orientin for the distinct time periods of the 6-days-adipogenesis. The cells were washed with PBS, and trypsinized. Cell number was measured with an Automated Cell Counter (TC-20, Bio-Rad, Hercules, CA, USA).

Chromatin immunoprecipitation (ChIP) assay was done as described previously [17]. Briefly, equal aliquots of chromatin supernatants were incubated with anti-FOXO1 antibody or rabbit normal IgG. After reverse crosslinking, the DNA was purified and used for PCR analysis. PCR was carried out using KOD FX DNA polymerase (Toyobo) and the primers; 5′-CCACTGGTGTGTATTTTACTGC-3′ and 5′-AAAATGGTGTGTCATAATGCTG-3′ in the following condition: after initial denaturation at 98 °C for 10 min, 32 cycles of 98 °C for 10 s, 55 °C for 15 s, and 72 °C for 30 s. The PCR products were analyzed using an agarose gel electrophoresis. The band intensity was measured and analyzed using ImageJ [18].

We examined the cytotoxicity of orientin on 3T3-L1 cells using WST assay. Cell culture was performed for 6 days in medium with various concentrations of orientin (0–50 μM). Orientin was nontoxic to 3T3-L1 cells at concentrations of <50 μM (Figure 1B). No morphological changes in the cells were observed in the microscopic analysis.
Next, we investigated the anti-adipogenic property of orientin on 3T3-L1 cells. The cells were differentiated into adipocytes for 6 days in medium with various concentrations of orientin (0, 10, 25, or 50 μM), and intracellular lipids were stained with Oil Red O. Oil Red O-stained lipid droplets in the cells were clearly increased in adipocyte differentiation, but they were reduced by orientin in a concentration-dependent manner (Figure 1C). Moreover, the elevated intracellular TG level during adipocyte differentiation was significantly lowered when treated with 50 μM orientin (Figure 1D). Based on these data, we used 50 μM orientin in subsequent studies.

3.2. Change in mRNA Level of Adipogenic, Lipogenic, and Lipolytic Genes by Orientin

3.4. Decrease in Expression Level of C/ebpδ Gene by Orientin in Early Stage of Adipogenesis

3.5. Repression of Dex-Mediated Activation of C/ebpδ Expression by Orientin

3.6. Repression of Activation of PI3K/Akt-FOXO1 Signaling by Orientin

3.7. Stage-Specific Repression of Adipogenesis by Orientin

3.8. Decrease of Binding of FOXO1 to Pparγ Promoter by Orientin

The FOXO-binding site is located at −237 in the proximal promoter region of the mouse Pparγ gene [14]. In a ChIP assay, the expected size of the PCR fragments containing the FOXO-binding site is 202-bp (Figure 8A). Amplified PCR fragments were detected in the undifferentiated cells at both 1 h and 6 days (Figure 8B). Its signal intensity was diminished by differentiation into adipocytes at 1 h (Figure 8B), indicating that binding of FOXO1 to the Pparγ promoter was decreased. In contrast, the intensity of PCR fragments was enhanced by the treatment with orientin or Akt inhibitor (Akti) at both 1 h and 6 days (Figure 8B). No amplified signals were detected when rabbit normal IgG was utilized instead of anti-FOXO1 antibody (Figure 8B). PCR fragments of the expected size were detected in all of the input samples (Figure 8B). These results indicate that the adipocyte differentiation-dependent decrease of binding of FOXO1 to the Pparγ promoter was negated by orientin through suppressing the activation of the PI3K/Akt-FOXO1 signaling in 3T3-L1 cells.

We showed that a flavonoid orientin from C. communis decreased the lipid accumulation in mouse adipocytes. Orientin decreased the expression of C/EBPδ and suppressed the PI3K/Akt-FOXO1 signaling in the early stage of adipogenesis, leading to reduced expression of the Pparγ gene. Thus, orientin has the potential to suppress an increase of cell size of adipocytes. We should further elucidate the mechanism by which orientin suppresses Dex-activated PPARγ expression and conduct an in vivo study to evaluate the anti-obesity properties of orientin. 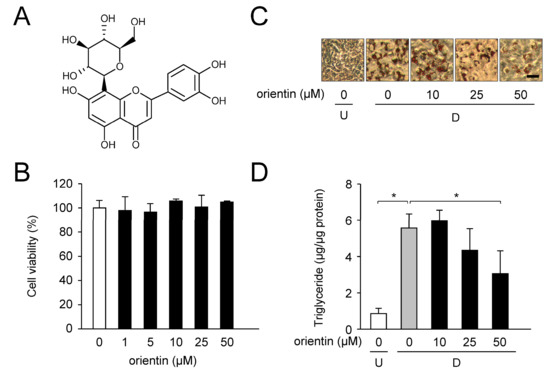 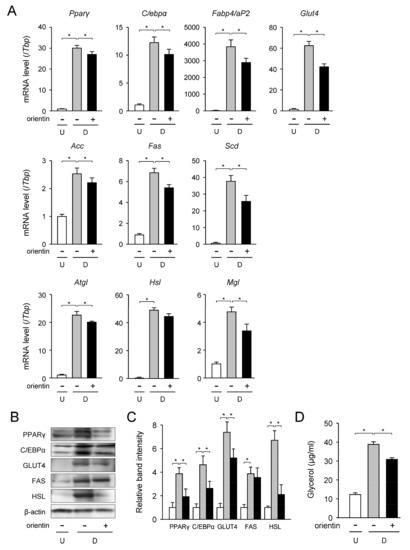 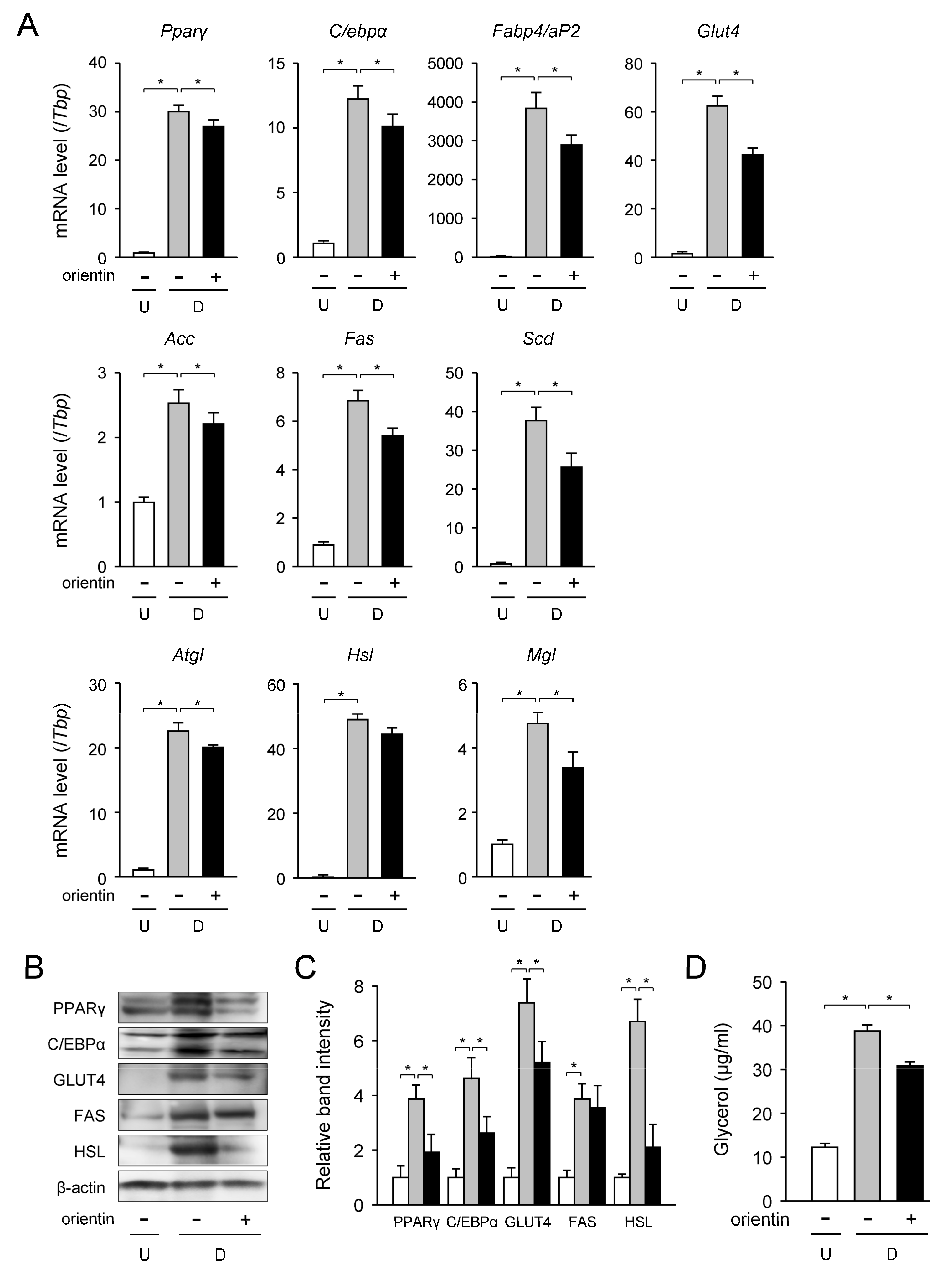 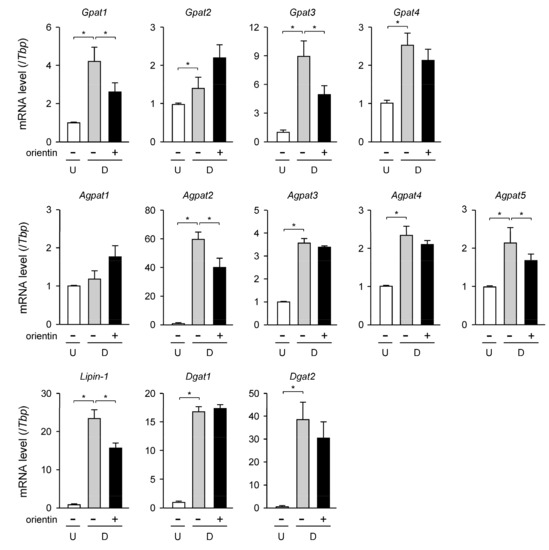 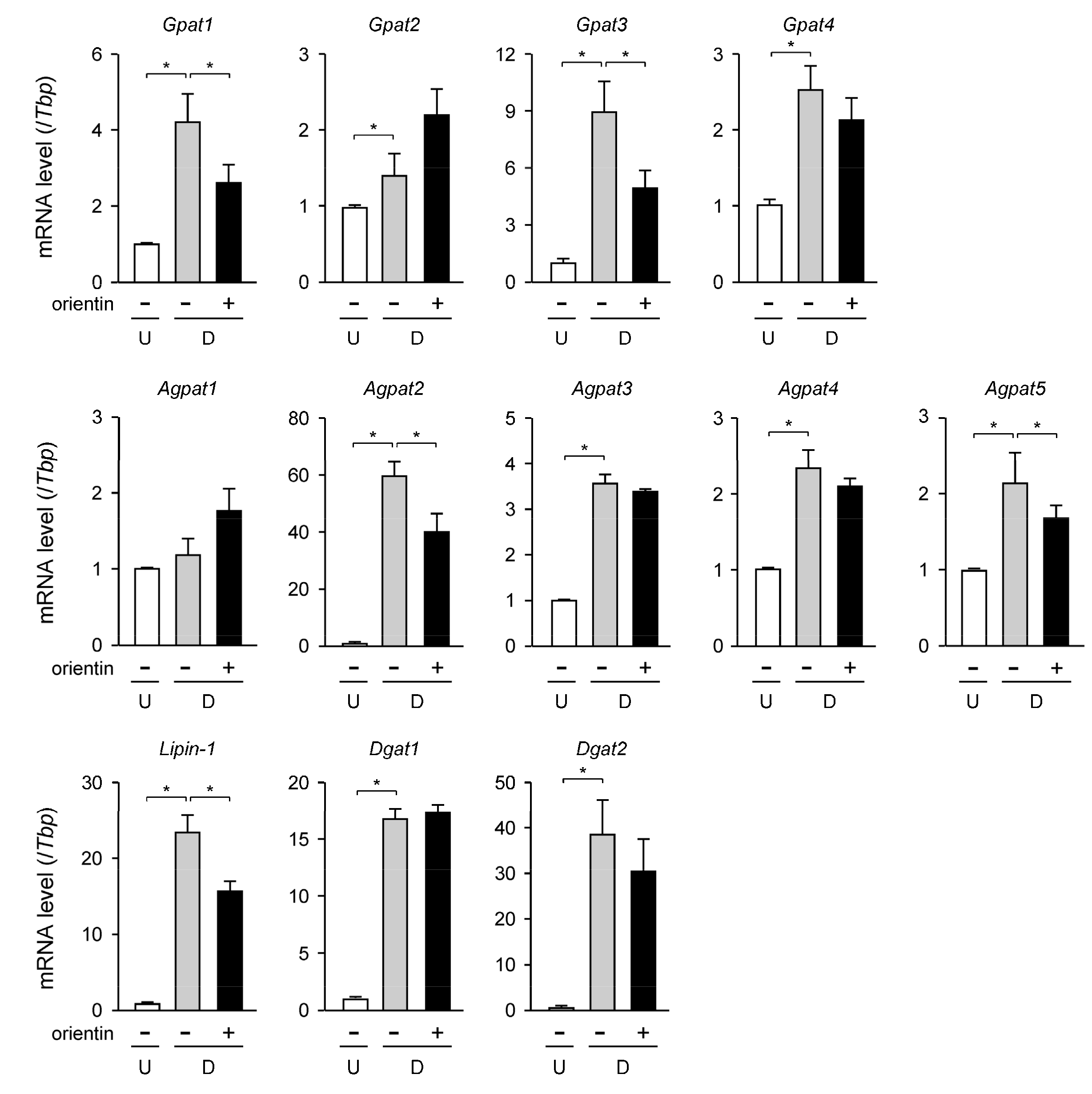 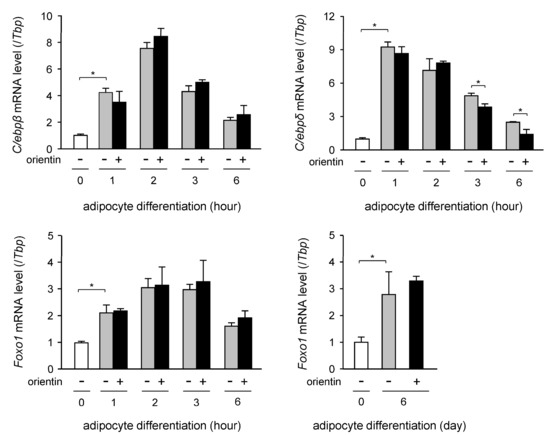 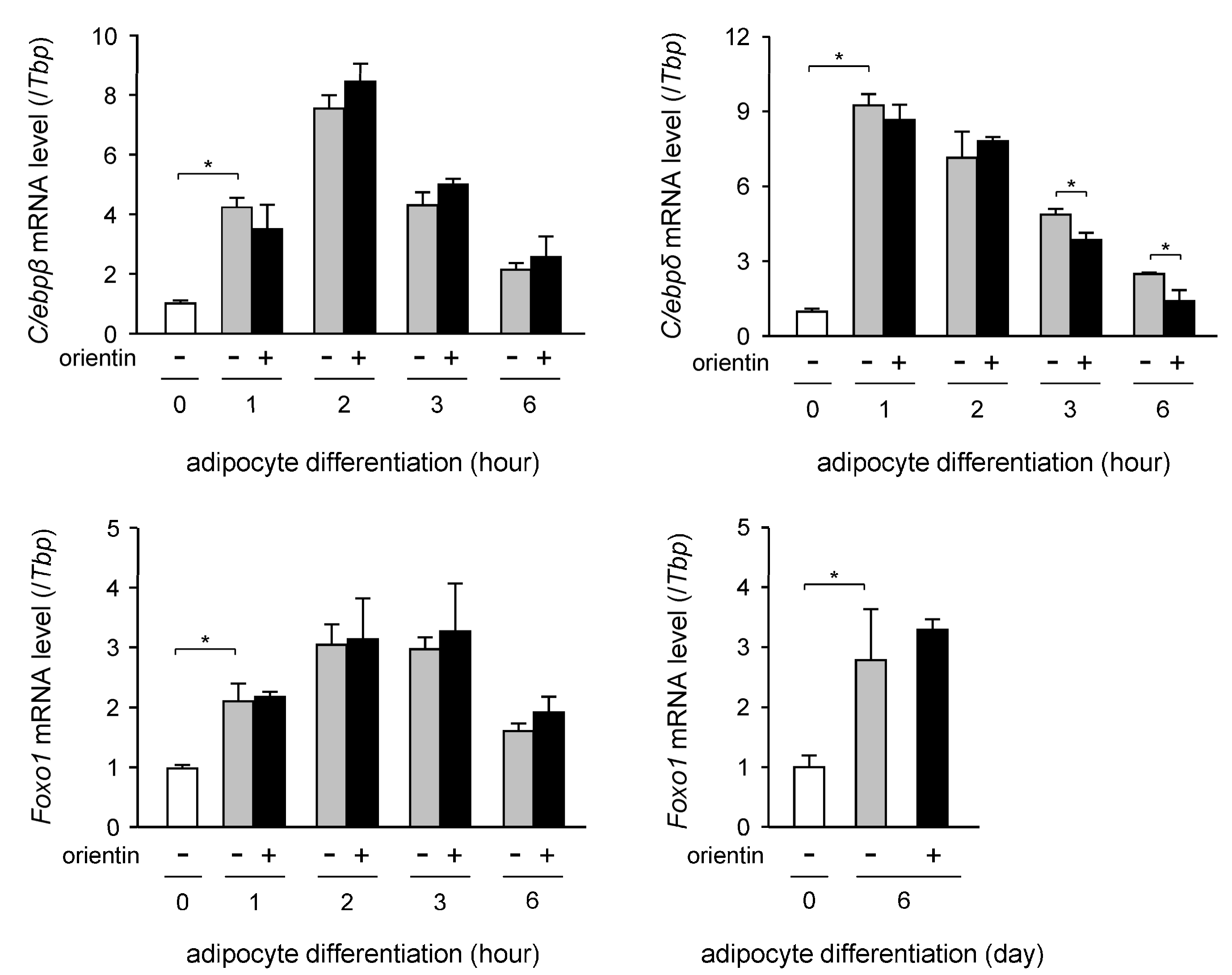 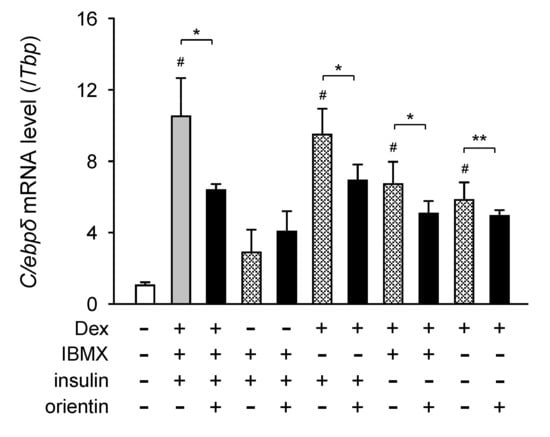 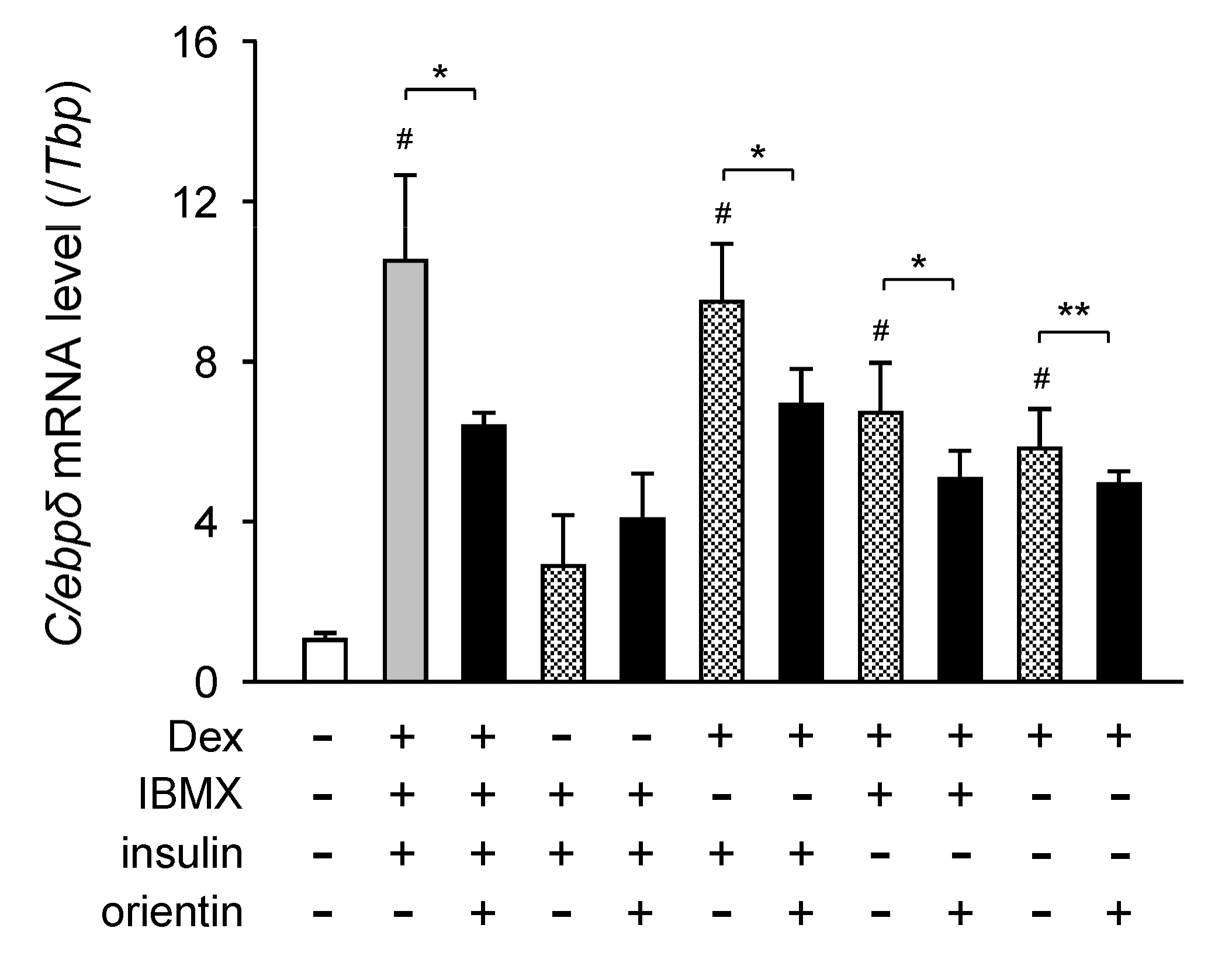 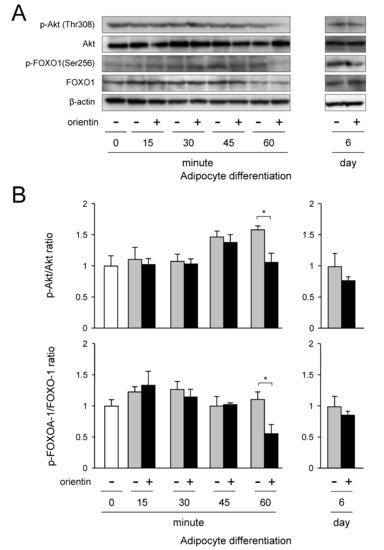 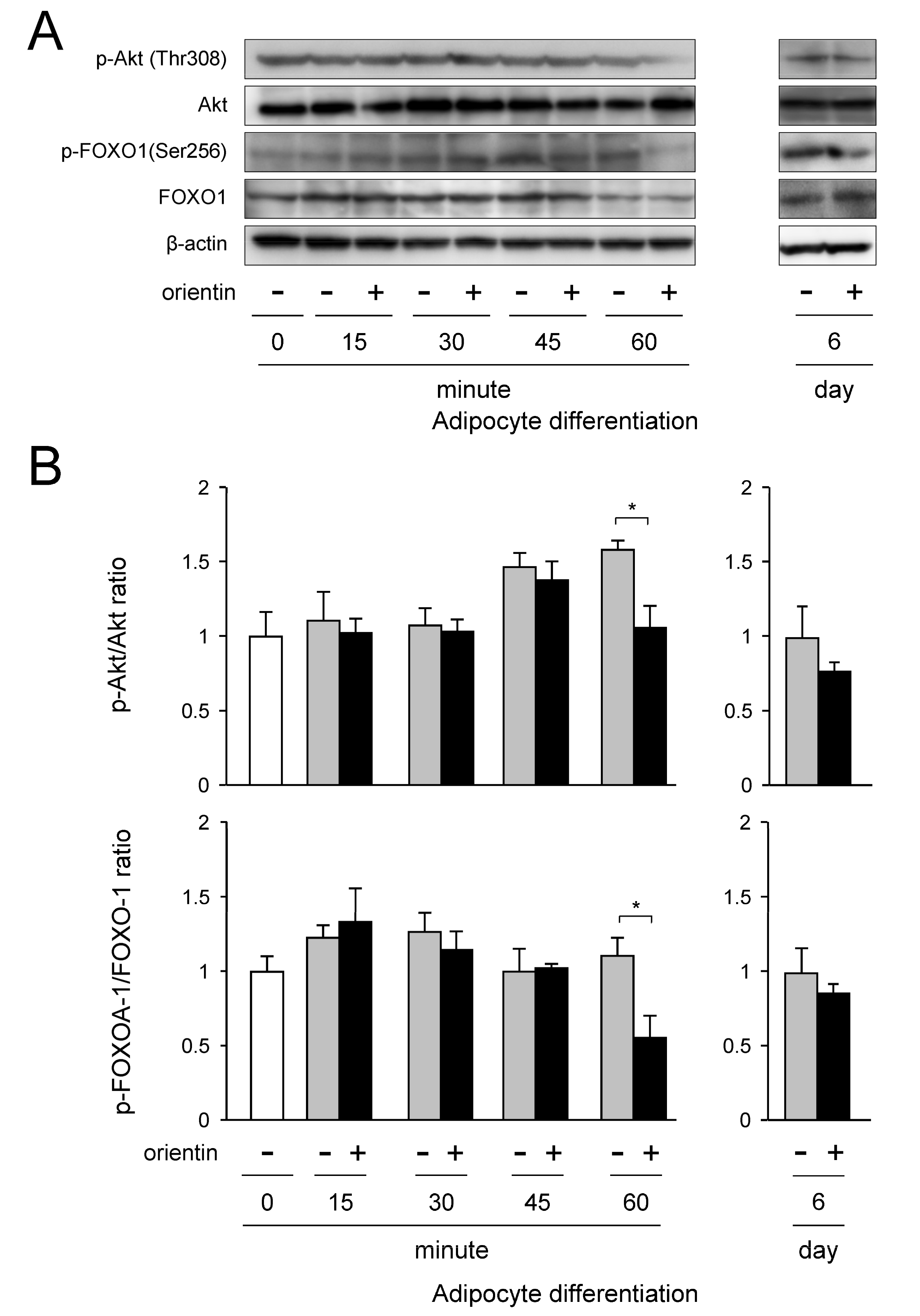 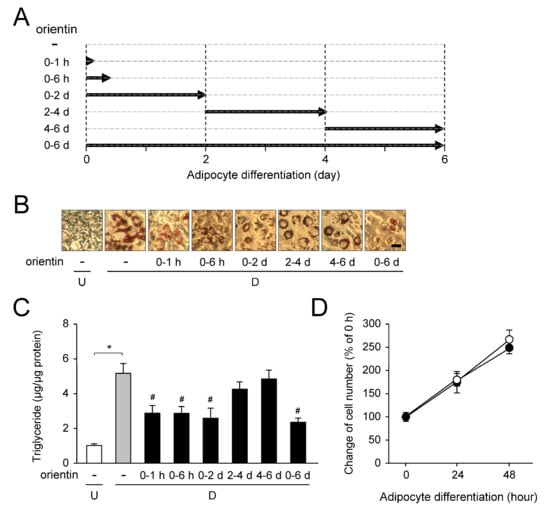 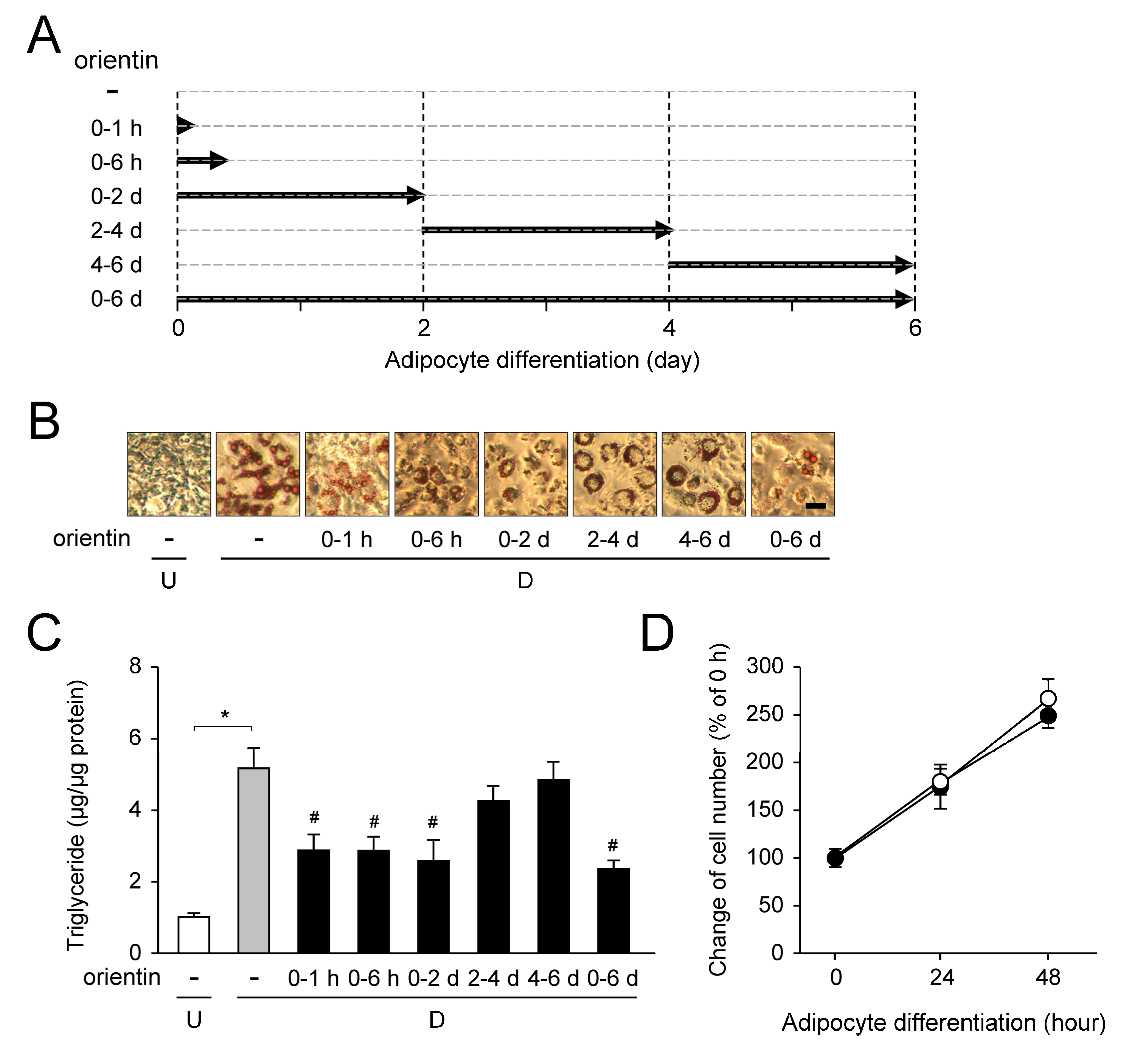 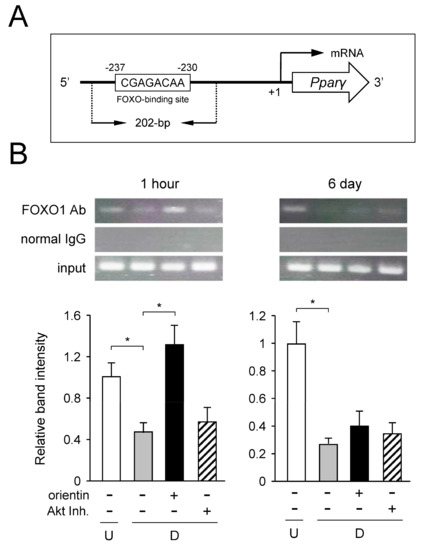 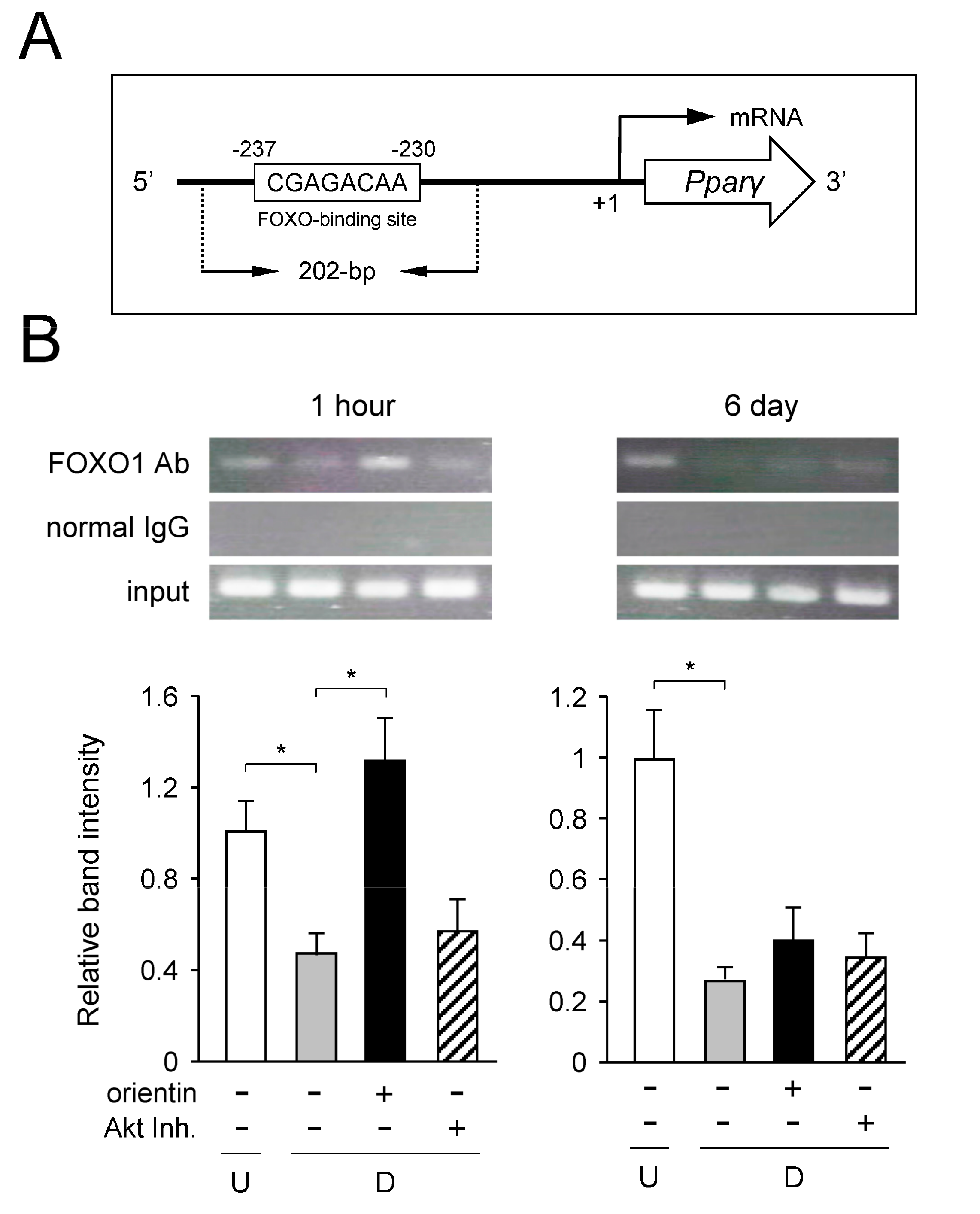 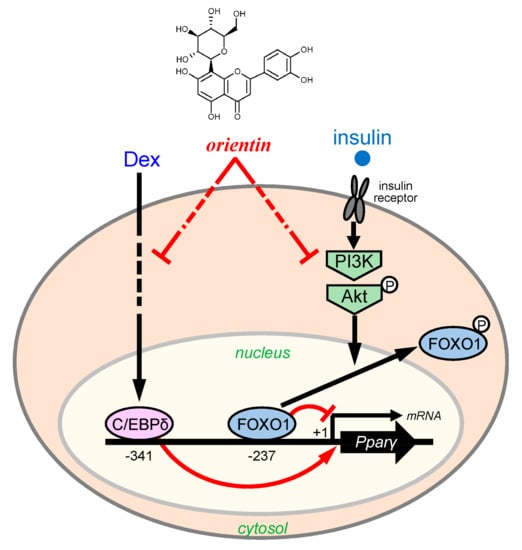 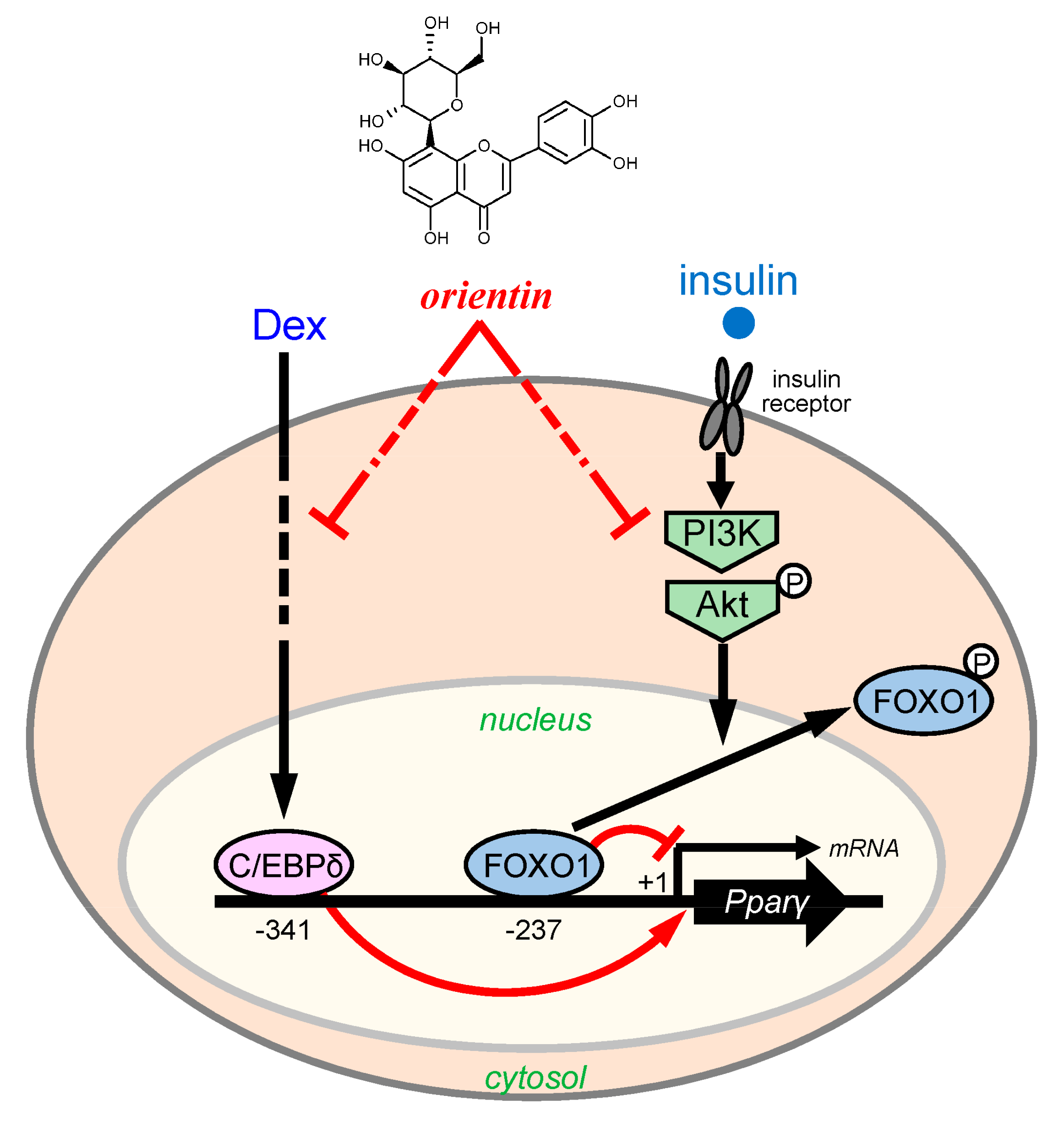 Table 1. Nucleotide Sequences of Primers Used in qPCR.
Table 1. Nucleotide Sequences of Primers Used in qPCR.
* DDBJ/ENA/GenBank database.
© 2018 by the authors. Licensee MDPI, Basel, Switzerland. This article is an open access article distributed under the terms and conditions of the Creative Commons Attribution (CC BY) license (http://creativecommons.org/licenses/by/4.0/).
We use cookies on our website to ensure you get the best experience. Read more about our cookies here.
Accept
We have just recently launched a new version of our website. Help us to further improve by taking part in this short 5 minute survey here. here.
Never show this again