The present study was undertaken to provide a better insight into the relationship between different levels of body mass index (BMI) and changing risk for hypertension, using an unselected sample of participants assessed during the Longevity Check-up 7+ (Lookup 7+) project. Lookup 7+ is an ongoing cross-sectional survey started in June 2015 and conducted in unconventional settings (i.e., exhibitions, malls, and health promotion campaigns) across Italy. Candidate participants are eligible for enrolment if they are at least 18 years of age and provide written informed consent. Specific health metrics are assessed through a brief questionnaire and direct measurement of standing height, body weight, blood glucose, total blood cholesterol, and blood pressure. The present analyses were conducted in 7907 community-living adults. According to the BMI cutoffs recommended by the World Health Organization, overweight status was observed among 2896 (38%) participants; the obesity status was identified in 1135 participants (15%), with 893 (11.8%) participants in class I, 186 (2.5%) in class II, and 56 (0.7%) in class III. Among enrollees with a normal BMI, the prevalence of hypertension was 45% compared with 67% among overweight participants, 79% in obesity class I and II, and up to 87% among participants with obesity class III (p for trend < 0.001). After adjusting for age, significantly different distributions of systolic and diastolic blood pressure across BMI levels were consistent. Overall, the average systolic blood pressure and diastolic blood pressure increased significantly and linearly across BMI levels. In conclusion, we found a gradient of increasing blood pressure with higher levels of BMI. The fact that this gradient is present even in the fully adjusted analyses suggests that BMI may cause a direct effect on blood pressure, independent of other clinical risk factors.
Keywords: body mass index; obesity; hypertension body mass index; obesity; hypertension

Despite health policies implemented in the last decades and increasingly available therapeutic options, hypertension and cardiovascular disease (CVD) continue to be the main cause of disability, morbidity and mortality, both in Europe and in the United States [1,2]. Primary and secondary prevention continues to address individuals who have experienced disease or present with one or more risk factors; furthermore, primordial prevention has been suggested for the attainment of global health at the population level [3,4]. In fact, the World Health Organization (WHO) recently highlighted the importance of controlling blood pressure as millions of individuals have CVD worldwide, accounting for 31% of the world’s population, of which 80% experience either heart diseases and stroke. Additionally, WHO dealt with high systolic and/or diastolic blood pressure as a severe problem and considered obesity as one of the most important risk factors to address (http://www.who.int/mediacentre/news/releases/2012).
Previous studies have documented the main factors of hypertension including age, gender, smoking, exercise, family history, dietary habits, and body mass index (BMI) [5,6,7]. The prevalence of obesity has been increasing throughout the world, including Europe [8,9]. It is a decisive risk factor in many chronic diseases such as hypertension, dyslipidemia, and diabetes mellitus type 2 [10,11,12]. High body weight and obesity, by means of BMI measure, are the main causes of these disorders; hence, with the importance on continuous weight management, research is actively being conducted [13].
A systematic review demonstrated that meeting higher numbers of ideal health metrics, including a normal BMI, was correlated with lower prevalence and incidence of both cardiovascular and non-cardiovascular diseases [14]. The link between obesity and hypertension is complex, considering that obesity-related hypertension is closely associated with other diseases in the course of the obesity. In general, obesity, which is usually determined by BMI, is one the principal risk factors for hypertension [8,15], and the prevalence of hypertension increases with rising BMI [16,17]. However, BMI, as the most frequent anthropometric measure used, does not reflect body fat distribution, and there has recently been some doubt concerning it as a convenient indicator of high body weight and obesity. Similarly, there are concerns about its capability to predict the risk of hypertension and CVD [18,19].
The present study was, therefore, undertaken to provide a better insight into the linear relationship between different levels of BMI and changing risk for hypertension, using an unselected sample of participants assessed during the Longevity Check-up 7+ (Lookup 7+) project.

For the present study, the database Lookup 7+ is used. The Lookup 7+ study protocol has been described in detail elsewhere [20,21]. Briefly, this project is an ongoing initiative developed by the Geriatric Medicine Department of the Università Cattolica del Sacro Cuore of Rome planned with the aim to improve healthy lifestyles in the general population [22]. People entering public environments (i.e., exhibitions, shopping centers, and sport events) or those participating in prevention campaigns have been screened using a specific questionnaire on lifestyle and had a brief check-up, specifically assembled on the basis of the ideal cardiovascular health metrics indicated by the American Heart Association [23]. Participants are selected as eligible for the check-up if they are at least 18 years of age and provide written informed consent. The only exclusion criteria are: self-reported pregnancy, incapacity to perform the physical performance tests, denial of blood capillary check, and the inability or the refusal to give written informed consent. The Università Cattolica del Sacro Cuore Ethical Committee ratified the study protocol [24].

Well-trained examiners, measured anthropometric indices with participants wearing light, thin clothing and no shoes. Body weight was measured through an analogue medical scale. Body height was measured using a standard stadiometer. Body weight and height were measured to the nearest 0.1 kg and 0.1 cm, respectively.
BMI was defined as weight (kilograms) divided by the square of height (meters). The BMI cutoffs recommended by the WHO were used. The classes of BMI reported by the WHO are: 18.5–24.9 kg/m2 for normal, 25.0–29.9 kg/m2 for overweight, and > 30 kg/m2, for obesity. Obesity was categorized as class I (30–34.00 kg/m2), class II (35–39.99 kg/m2), and class III (> 40 kg/m2) (www.who.int/nutrition/publications/obesity/WHO_TRS_894).

Blood pressure was measured—in the sample of Milan EXPO 2015—with a clinically validated Omron M6 electronic sphygmomanometer (Omron, Kyoto, Japan) and in all other samples with a manual sphygmomanometer according to recommendations from international guidelines [26]. In all participants, blood pressure measurements were obtained after resting for 5 min in a seated position, with 30 s intervals between cuff inflations. An average of three measurements were used. Care was taken to select the cuff size according to the participant’s arm circumference. In all the experimental settings, the assessment was performed in a dedicated room, with an optimal room temperature, and respecting the privacy.
Blood pressure values were categorized as lower than 120/80 mmHg (if untreated), between 120/80 and 139/89 mmHg (or treated to goal), and equal to or higher than 140/90 mmHg. Antihypertensive drug use was also recorded. Hypertension was defined as mean systolic blood pressure ≥ 140 mmHg and/or diastolic blood pressure ≥ 90 mmHg and/or anti-hypertensive drug use [27].

Smoking status was categorized as current or never/former smoker [25]. Healthy diet was considered as the consumption of at least three portions of fruit and/or vegetables per day [28]. Daily intake of fruit and vegetables was calculated on the reference tables for the Italian population released by the Italian Society of Nutrition (SINU). Accordingly, three or more portions of fruit and/or vegetables correspond approximately to 400 g, which is the minimum recommended by the WHO. The use of three or more portions to identify a healthy diet is in line with Italian dietary habits for fruit and vegetables, which are typically eaten during the main meals rather than as snacks. Reference amounts are available at http://www.sinu.it/html/cnt/larn.asp.
Regular participation in physical activity was considered as involvement in exercise training at least twice a week during the last year. Accordingly, participants were considered physically active or inactive. To be assigned in the active group, the following activities were considered: walking for at least 30 min per session, cycling, swimming, running, and resistance exercise [20,29].

Continuous variables are expressed as mean ± standard deviation (SD), categorical variables as frequencies by absolute value and percentage (%) of the total. Descriptive statistics were used to define demographic and key clinical characteristics of the study population according to the presence of hypertension. Differences in proportions and the means of covariates were evaluated using Fisher’s Exact Test and t test statistics, respectively.
Logistic regression analysis was used to assess the association between different levels of BMI (normal weight, overweight, and obesity) and hypertension. To identify factors independently associated with the presence of hypertension, we first estimated a crude prevalence rate ratio (PRR) at a 95% confidence interval (CI) and then controlled for age and gender (model 1). A logistic regression analysis was computed including the five cardiovascular health metrics (smoking, healthy diet, physical activity, cholesterol, and serum glucose level).
Finally, analysis of covariance (ANCOVA)—adjusted for age—was used to examine the effect of BMI levels on systolic and diastolic blood pressure.
All analyses were performed using SPSS software (version 11.0, SPSS Inc., Chicago, IL, USA). 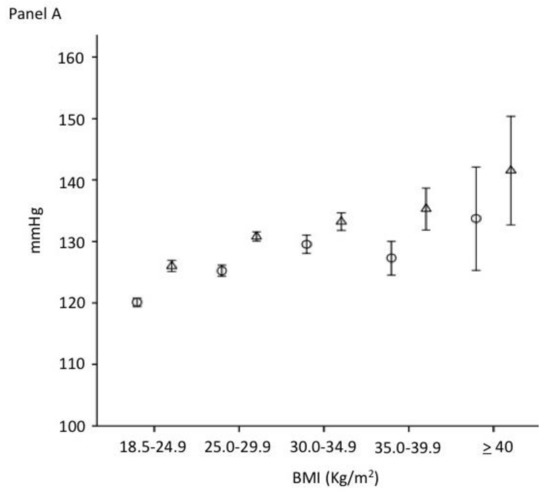 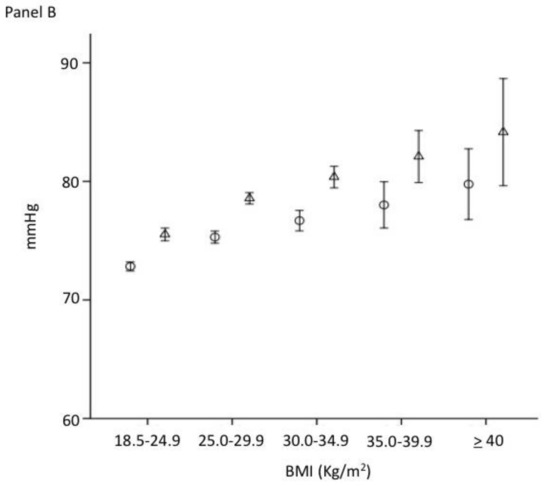