Who Are the Key Players Involved with Shaping Public Opinion and Policies on Obesity and Diabetes in New Zealand?
Previous Article in Journal

Copper Metabolism of Newborns Is Adapted to Milk Ceruloplasmin as a Nutritive Source of Copper: Overview of the Current Data

Copper, which can potentially be a highly toxic agent, is an essential nutrient due to its role as a cofactor for cuproenzymes and its participation in signaling pathways. In mammals, the liver is a central organ that controls copper turnover throughout the body, including copper absorption, distribution, and excretion. In ontogenesis, there are two types of copper metabolism, embryonic and adult, which maintain the balance of copper in each of these periods of life, respectively. In the liver cells, these types of metabolism are characterized by the specific expression patterns and activity levels of the genes encoding ceruloplasmin, which is the main extracellular ferroxidase and copper transporter, and the proteins mediating ceruloplasmin metalation. In newborns, the molecular genetic mechanisms responsible for copper homeostasis and the ontogenetic switch from embryonic to adult copper metabolism are highly adapted to milk ceruloplasmin as a dietary source of copper. In the mammary gland cells, the level of ceruloplasmin gene expression and the alternative splicing of its pre-mRNA govern the amount of ceruloplasmin in the milk, and thus, the amount of copper absorbed by a newborn is controlled. In newborns, the absorption, distribution, and accumulation of copper are adapted to milk ceruloplasmin. If newborns are not breast-fed in the early stages of postnatal development, they do not have this natural control ensuring alimentary copper balance in the body. Although there is still much to be learned about the neonatal consequences of having an imbalance of copper in the mother/newborn system, the time to pay attention to this problem has arrived because the neonatal misbalance of copper may provoke the development of copper-related disorders. View Full-Text
Keywords: embryonic type copper metabolism; milk ceruloplasmin; baby formula embryonic type copper metabolism; milk ceruloplasmin; baby formula
►▼ Show Figures 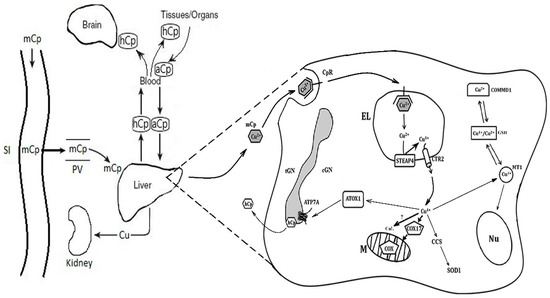