Reply: On the Reporting of Odds Ratios and Risk Ratios, Nutrients 2018, 10, 10
Previous Article in Journal

Vitamin B12 deficiency during pregnancy has been associated with poor fetal outcome. Here we investigate the influence of a one-carbon (1C) imbalanced diet (low B12, high folate, high methionine) on maternal B12 status, fetal outcome, B12 distribution, and on the 24-h distribution of synthetic cyano-B12 (CN-B12) and natural hydroxo-B12 (HO-B12). Female Wistar rats were mated while on a 1C balanced (n = 12) or imbalanced diet starting two weeks (n = 10) or four weeks (n = 9) prior to pregnancy and continuing throughout pregnancy. At gestation day 18 (out of 21), all rats received an oral dose of labeled CN-B12 or HO-B12. After 24 h, the rats were sacrificed. Fetuses were inspected, and maternal tissues and fetuses were measured for endogenous and labeled B12. Pregnancy caused a redistribution of B12 from the kidneys to the liver and fetal compartment (uterus, placenta, fetuses). The 1C imbalanced diet reduced maternal kidney B12 and gave rise to lower-weight fetuses with visual malformations. In contrast, fetal B12 did not reflect fetal outcome. This suggests that maternal B12 is more important for fetal outcome than fetal B12. The 24-h distribution of labeled B12 in the rats on the 1C imbalanced diet showed a higher fetal accumulation of CN-B12 than HO-B12, while the opposite was seen in the maternal tissues. View Full-Text
Keywords: vitamin B12; cobalamin; cyano-B12; hydroxo-B12; pregnancy; rats; 1C metabolism vitamin B12; cobalamin; cyano-B12; hydroxo-B12; pregnancy; rats; 1C metabolism
►▼ Show Figures 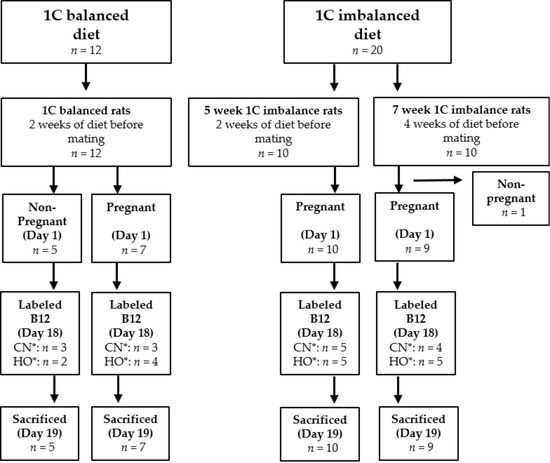