Claimed Effects, Outcome Variables and Methods of Measurement for Health Claims Proposed Under European Community Regulation 1924/2006 in the Framework of Maintenance of Skin Function
Previous Article in Special Issue

Skeletal muscle mass (SMM) is determined by the balance between protein synthesis and breakdown. Skeletal muscle loss (SML) is a major complication of liver cirrhosis (LC). In clinical settings, the assessment of skeletal muscle mass (SMM) to identifysevere SML (or sarcopenia) has long represented a very simple and objective bedside clinical measure of liver disease severity, because SML is associated with liver disease prognosis. It has now recently enhanced thanks to the support of various new imaging methods for assessing core SMM.
In this issue of Nutrients, the prognostic value of SMM was reported by studies in various categories of hepatic conditions, and the information has furthered our knowledge on the following issues:
In future clinical and research settings, hand-grip dynamometry, which can provide measures for risk stratification for all-cause death, cardiovascular death, and cardiovascular disease in the general population [5], should be also implemented for the assessment of muscle strength. Indeed, for patients with cirrhosis, muscle strength, as assessed by hand-grip dynamometry, appears to be an easy-to-measure, sensitive, and specific marker for depletion of SMM [6] and ispositively correlated with total body protein [5,7].

Another major issue concerns the fine line between the need for a hypercaloric diet rich in proteins and the risk of hepatic encephalopathy and hyperammonemia in sarcopenic, chronically malnourished patients with end-stage liver disease. The appropriate nutritional support of adult cirrhosis before and after liver transplantation was the focus of three articles in this issue.

A number of inherited metabolic/genetic defects, including those that require (a) specific well established dietary restrictions (galactosemia, hereditary fructose intolerance, inborn errors of the urea cycle such as citrin deficiency and related metabolic pathways),(b) the addition of specific drugs (e.g., tyrosinemia; Wilson disease), or (c) special food supplements such as uncooked starch (e.g., glycogen storage diseases), represent a further challenge not only for pediatricians but also for adult hepatologists at the time of transition of care [13]. A dietician familiar with metabolic disorders is often needed on the team caring for these patients [14].
Dietary intervention is an evolving and increasingly used therapy also for the novel group of Congenital Disorders of Glycosylation (CDG). Glycosylation consists in the covalent binding ofan oligosaccharide chain to the polypeptide side chains of a glycoprotein. The carbohydrate consists of a simple sugar (e.g., glucose, galactose, mannose, and xylose), an amino sugar (e.g., N-acetylglucosamine or N-acetylgalactosamine), or an acidic sugar (e.g., sialic acid or N-acetylneuraminic acid). Monosaccharide supplements are being evaluated in trials for more and more subtypes of CDG, because monosaccharides have relatively high safety, especially compared to experimental drugs, and are easy to administer. The mechanism is still poorly understood, although in CDG-Ib, alimentary addition of mannose appear to bypass the defective step (conversion of fructose-6-phosphate to mannose-6-phosphate) by allowing for the formation of mannose-6-phosphate via the action of hexokinase [15]. In their article, Morava and her group presented an accurate overview of very recent data on the contributions of nutritional therapy by evaluating many of the different options for nutritional therapy that have somehow been associated with a positive effect on liver function in CDG [16]. The questions these authors, however, pose include whether or not these dietary interventions are sufficient and whether these dietary interventions are the most efficient therapies for CDG. They remind the reader that mannose therapy for patients with mannose phosphate isomerase (MPI)-CDG has not only been found to be possibly hazardous at higher doses, but unfortunately also cannot prevent progressive fibrotic liver disease in about one third of affected patients. In addition, recent experience with galactose therapy has been found beneficial for several CDGs [17,18,19] without, however, completely alleviating all clinical symptoms. While recognizing the progress this approach represents, they also suggest that future therapy for CDG therapy will most likely include administration of activated monosaccharides instead of single dietary sugars. The efficacy and toxicity of these novel drugs, however, remain to be investigated in human trials as well after careful preliminary evaluations in animal models are made.

A number of liver diseases that are driven by primary nutritional/intestinal tract diseases (e.g., inflammatory bowel disease (IBD), celiac disease, cystic fibrosis (CF), alcoholic steatohepatitis (ASH), and non-alcoholic steatohepatitis (NASH) parenteral nutrition-associated liver disease(PNALD)), which are included under the umbrella term gut-liver axisdysfunction [20,21], also represent specific challenges. Investigations of the associations between the liver and diseased intestine are still preliminary, and further studies are essential for the clinical management of these complicated conditions (Figure 2).
Genetic predisposition and environmental stimulation determine the loss of tolerance in primary biliary cholangitis (PBC) where antimitochondrial antibodies (AMAs) cross-react with proteins from intestinal bacteria (E2 subunit), possibly because of molecular mimicry. Aberrant homing of intestinal lymphocytes also occurs. The association between celiac disease and PBC is also well established.
Closely associated with inflammatory bowel disease, primary sclerosing cholangitis (PSC) is also a heterogeneous disease that involves marked interactions between altered immune status (human leucocyte antigen (HLA)), altered bile composition, and host microbiome. Some subgroups of antineutrophil cytoplasmic antibodies (ANCAs) in the blood and bile are associated with increased liver enzyme levels and are biomarkers of liver disease with a possible role in the pathogenesis of the disease as well.
In celiac disease, immunoactive molecules generated from cross-linking between tissue transglutaminase and food/bacterial antigens reach the liver through the portal circulation and are responsible for transglutaminase antigen (tTG)–antibody complex hepatic deposits. The liver may respond to gluten either as a reactive “celiac hepatitis” or a true autoimmune hepatitis (with anti-liver cytosol (LC1), anti-nuclear antibodies (ANA), anti-smoot muscle antibodies (ASMA), anti-liver kidney microsomes (LKM1)) based on the DQ2 strong linkage disequilibrium with the DR3 and DR4, the latter being the major HLA risk factor for autoimmune liver disease.
Increased levels of bacterial endotoxin in the portal circulation suggest a role for gut-derived toxins also in the alcoholic liver diseasesteatohepatitis (ASH), non-alcoholic fatty liver disease (NAFLD/NASH), and parenteral nutrition liver disease (PNALD). Alcohol (EtOH) consumption and endogenous alcohol production by gut bacteria in obese individuals can disrupt the tight junctions (TJ) of the intestinal epithelial barrier, resulting in increased gut permeability. The bacterial endotoxin (lypopolisaccharides, LPS) contributes to inflammation through activation of toll-like receptor 4 (TLR4). Oxidative stress with reactive oxygen species (ROS), insulin resistance (IR), secondary bile acids (BAs), and farnesoid X receptor activation (FXR) represent major mechanisms of pathogenesis.
Animals with cystic fibrosis transmembrane conductance regulator defects and patients with cystic fibrosis have microbiomes that are different from individuals without CF, which might be accounted for by altered bile properties, prolonged small bowel transit, frequent antibiotic exposure, and small intestinal bacterial overgrowth (SIBO) (adapted and modified from [20]).
For celiac disease [22] and NASH [23,24], nutritional correction of the underlying gastrointestinal/nutritional disease may be effective in preventing the progression of liver disease. Readers are also referredto the 2017 Nutrients issue (ISSN 2072-6643) edited by Nobili and Alisi, where specific measures for the treatment of obesity-related NAFLD are specifically discussed.
Unfortunately, for some nutritional/intestinal conditions such as IBD and CF, the liver disease does not seem to be affected by decreases in the inflammatory activity in the intestinal tract [25] or improved function of the pancreas/respiratory tract [26].
Impaired intestinal function, directly or indirectly associated with gut dysbiosis, may also be one of the main pathogenic mechanisms of PNALD [27] (Figure 2).

In conclusion, to improve quality of life and prevent nutrition-related medical complications, patients diagnosed with advanced liver disease should have their nutritional status promptly assessed and be supported by appropriate dietary interventions. Furthermore, a dietary approach that uses specific food supplements and/or restriction diets is often necessary for patients with hepatic conditions associated with an underlying metabolic or nutritional or intestinal disease, due to the hepatoprotective and/or anti-oxidant and/or anti-inflammatory effects of these measures. 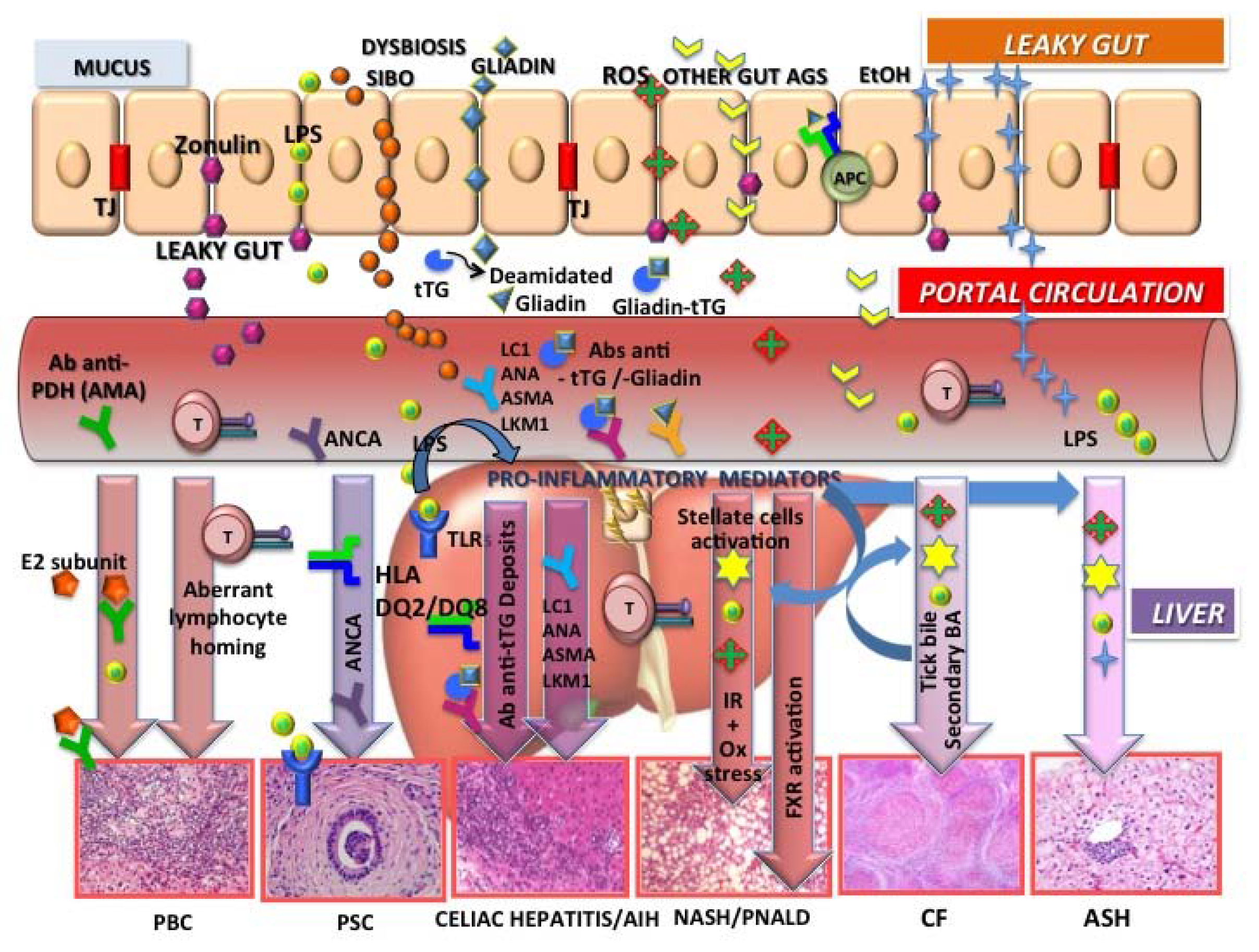