Across Eastern Africa, croplands cover 45 million ha. The regional economy is heavily dependent on small holder traditional rain-fed peasant agriculture (up to 90%), which is vulnerable to extreme weather events such as drought and floods that leads to food insecurity. Agricultural production in the region is moisture limited. Weather station data are scarce and access is limited, while optical satellite data are obscured by heavy clouds limiting their value to study cropland dynamics. Here, we characterized cropland dynamics in Eastern Africa for 2003–2015 using precipitation data from Tropical Rainfall Measuring Mission (TRMM) and a passive microwave dataset of land surface variables that blends data from the Advanced Microwave Scanning Radiometer (AMSR) on the Earth Observing System (AMSR-E) from 2002 to 2011 with data from AMSR2 from 2012 to 2015 with a Chinese microwave radiometer to fill the gap. These time series were analyzed in terms of either cumulative precipitable water vapor-days (CVDs) or cumulative actual evapotranspiration-days (CETaDs), rather than as days of the year. Time series of the land surface variables displayed unimodal seasonality at study sites in Ethiopia and South Sudan, in contrast to bimodality at sites in Tanzania. Interannual moisture variability was at its highest at the beginning of the growing season affecting planting times of crops, while it was lowest at the time of peak moisture. Actual evapotranspiration (ETa) from the simple surface energy balance (SSEB) model was sensitive to track both unimodal and bimodal rainfall patterns. ETa as a function of CETaD was better fitted by a quadratic model (r2 > 0.8) than precipitable water vapor was by CVDs (r2 > 0.6). Moisture time to peak (MTP) for the land surface variables showed strong, logical correspondence among variables (r2 > 0.73). Land surface parameters responded to El Niño-Southern Oscillation and the Indian Ocean Dipole forcings. Area under the curve of the diel difference in vegetation optical depth showed correspondence to crop production and yield data collected by local offices, but not to the data reported at the national scale. A long-term seasonal Mann–Kendall rainfall trend showed a significant decrease for Ethiopia, while the decrement was not significant for Tanzania. While there is significant potential for passive microwave data to augment cropland status and food security monitoring efforts in the region, more research is needed before these data can be used in an operational environment. View Full-Text
Keywords: AMSR-E; AMSR2; passive microwave; rainfall; actual evapotranspiration; quadratic model; crop production AMSR-E; AMSR2; passive microwave; rainfall; actual evapotranspiration; quadratic model; crop production
►▼ Show Figures 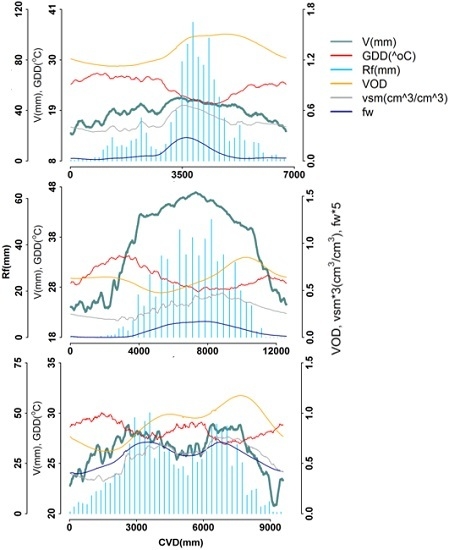