Joost C. B. Hoedjes
and

Accurate and consistent rainfall observations are vital for climatological studies in support of better agricultural and water management decision-making and planning. In East Africa, accurate rainfall estimation with an adequate spatial distribution is limited due to sparse rain gauge networks. Satellite rainfall products can potentially play a role in increasing the spatial coverage of rainfall estimates; however, their performance needs to be understood across space–time scales and factors relating to their errors. This study assesses the performance of seven satellite products: Tropical Applications of Meteorology using Satellite and ground-based observations (TAMSAT), African Rainfall Climatology And Time series (TARCAT), Climate Hazards Group InfraRed Precipitation with Station data (CHIRPS), Tropical Rainfall Measuring Mission (TRMM-3B43), Climate Prediction Centre (CPC) Morphing technique (CMORPH), Precipitation Estimation from Remotely Sensed Information using Artificial Neural Networks Climate Data Record (PERSIANN-CDR), CPC Merged Analysis of Precipitation (CMAP), and Global Precipitation Climatology Project (GPCP), using locally developed gridded (0.05°) rainfall data for 15 years (1998–2012) over East Africa. The products’ assessments were done at monthly and yearly timescales and were remapped to the gridded rain gauge data spatial scale during the March to May (MAM) and October to December (OND) rainy seasons. A grid-based statistical comparison between the two datasets was used, but only pixel values located at the rainfall stations were considered for validation. Additionally, the impact of topography on the performance of the products was assessed by analyzing the pixels in areas of highest negative bias. All the products could substantially replicate rainfall patterns, but their differences are mainly based on retrieving high rainfall amounts, especially of localized orographic types. The products exhibited systematic errors, which decreased with an increase in temporal resolution from a monthly to yearly scale. Challenges in retrieving orographic rainfall, especially during the OND season, were identified as the main cause of high underestimations. Underestimation was observed when elevation was <2500 m and above this threshold; overestimation was evident in mountainous areas. CMORPH, CHIRPS, and TRMM showed consistently high performance during both seasons, and this was attributed to their ability to retrieve rainfall of different rainfall regimes. View Full-Text
Keywords: satellite-derived rainfall estimates; rain gauge; topography; seasonality; East Africa satellite-derived rainfall estimates; rain gauge; topography; seasonality; East Africa
►▼ Show Figures 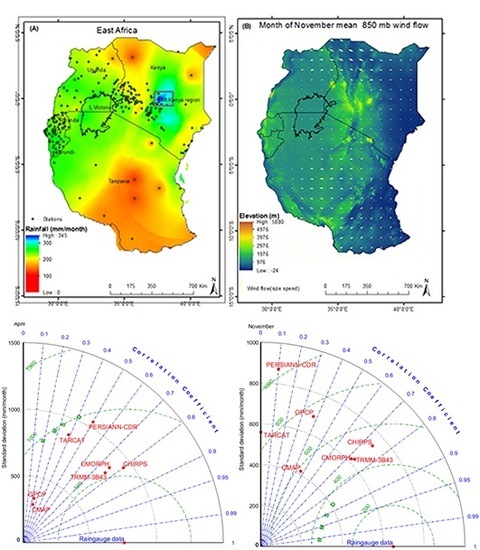