Over the past four decades Delhi, India, has witnessed rapid urbanization and change in land use land cover (LULC) pattern, with most of the cultivable areas and wasteland being converted into built-up areas. Presently around 40% land is under built-up area, a drastic rise of 30% from 1977. The effect of changing LULC, at a local scale, on various variables-land surface temperature (LST), normalized difference vegetation index (NDVI), emissivity, albedo, evaporation, Bowen ratio, and planetary boundary layer (PBL) height, from 1991–2016, is investigated. To assess the spatio-temporal dynamics of land-air interactions, we select two different 100 km transects covering the NE-SW and NW-SE expanse of Delhi and its adjoining areas. High NDVI and emissivity is found for regions with green cover and drastic reduction is noted in built-up area clusters. In both of the transects, land surface variations manifest itself in patterns of LST variation. Parametric and non-parametric correlations are able to statistically establish the land-air interactions in the city. NDVI, an indirect indicator for LULC classes, significantly helps in understanding the modifications in LST and ultimately air temperature. Significant, strong positive relationships exist between skin temperature and evaporation, skin temperature and PBL height, and PBL height and evaporation, providing insights into the meteorological changes that are associated with urbanization.
Keywords: LULC; LST; transect; land-air interactions; remote sensing; correlation LULC; LST; transect; land-air interactions; remote sensing; correlation

High local scale spatio-temporal variations in LULC classes are noted along both transects. Moreover, on comparing between L1 and L2 transect, distinctly unique differences in LULC class patterns are seen, which is indicative of spatial heterogeneity existing within the city. About 30 km and 40 km stretch of L1 and L2 transect, respectively, lies inside the administrative boundary of Delhi (Figure 3). Each grey bar in Figure 3, Figure 4 and Figure 5 represents one of the nine categories of LULC class (falling within the administrative boundary of Delhi) observed along the two transects at 250 m intervals. For each transect, drastic local scale LULC changes have occurred over time. Specifically focusing inside the city boundary for L1 transect, and moving from NE to SW direction, the following broad pattern of LULC change is observed- scrubs/degraded forest (41–43 km; T1) along with other forest classes and agriculture (45–50 km; T1) gets converted to built-up area in the following time periods. A major portion of dense forest (53–60 km) gets thinner over time. Conversion to predominantly built-up area from various classes is noted from T1 to T3 along the remaining stretch. Similarly moving from NW to SE direction along L2 transect, it is observed that most of the cultivated areas get converted to built-up areas over time (Figure 3). A brief description of LULC class patterns (as interpreted from Google Earth imagery, Figure 1d) of the remaining transect stretches falling beyond the city boundary is discussed. Major portion of the NE part (~0–40 km) of L1 transect comprises of cultivable area that is interspaced with small built-up area patches (wasteland near Delhi boundary), while the SW portion (~70–100 km) beyond the Delhi border is mainly the rocky terrain of the Aravalli range. When looking at the NW part (~0–20 km) of L2 transect, the presence of primarily cultivated area is seen along with patches of wasteland, whereas, the SE part (~60–100 km) of the transect is a mix of built-up area, open forest, and wasteland.

3.2. Land-Air Interactions over the Transects

We finally assess the underlying associations existing between each of the variables. For this purpose, no bifurcation of data in terms of time periods and seasons for each studied variable is made. Mean and standard deviation (1σ) for both transects is tabulated for all of the variables (Table 1). It is found that both LST and skin temperature is higher in L1 than in L2 transect. The corresponding, mean NDVI and emissivity is found to be comparatively higher in L1 than in the other transect. A lower evaporation rate alongside a higher Bowen ratio is able to justify high temperature in this transect. As temperature rises, the associated atmospheric energetics is more intense and also leads to an elevated PBL height. Negligible difference in albedo is noted. Furthermore, as observed in Figure 3, considerably higher variation of LST in L1 transect is also corroborated from Table 1. In general, the same is observed for all of the other variables. High standard deviation implies more heterogeneity in LULC in space, as well as time in L1.
Results of parametric and non-parametric correlation tests applied for L1 transect are presented in Table 2 and Table 3, and for L2 transect in Table 4 and Table 5. Parametric correlation tests e.g., Pearson’s r assumes an inherent linear relationship in the dataset while non-parametric correlation tests e.g., Spearman’s ρ and Kendall’s τ do not assume any such linearity in the considered variables. Associations for Landsat and ERA-Interim derived variables have been calculated separately due to differences in the number of samples.
For both L1 and L2 transects, the correlations reveal a significant (at 99% level of confidence) negative relationship between LST and NDVI (Table 2 and Table 4). Emissivity varies gradually for most land cover features, as seen from Figure 5. Yet the study is able to capture the significant (at 99% level of confidence) and dominant negative correlation with LST (as also expected by Stefan- Boltzmann relation). Similarly, a strong positive relationship exists between NDVI and emissivity. As NDVI is an indirect indicator for LULC classes, it can be said that LULC does significantly aid in altering LST. Indeed, LST is not solely dependent on emissivity. Other conditions, including climatic factors, such as evaporation, PBL height, etc., also play an important role in altering LST. The same is observed from Table 3 and Table 5. Among the five ERA-interim variables, significant strong positive relationships exist between skin temperature and evaporation, skin temperature and PBL height and PBL height and evaporation for the two transects. A significant negative relationship exists between Bowen ratio and evaporation. Albedo has a weak significant relationship with Bowen ratio (positive association) and evaporation (negative association). Thus, both parametric and non-parametric correlation tests are able to explain interactions within various land-air variables.

This assessment provides significant confidence in the ability to study the urban transects and the mesoscale/regional land-atmosphere interactions that are influenced by urbanization using a combination of remote sensing/ satellite based land state and reanalysis products. The study is able to surmise that LULC change, a local scale phenomenon, indeed has a significant impact on regional features most directly through changes in the LST. Land surface variables e.g., NDVI, emissivity, albedo, and Bowen ratio, interact with the overlying atmosphere through various feedback systems and produce changes in LST, evaporation rates, as well as PBL height. The study looked at these variables because LST relates to the surface characteristics, evaporation (and latent heat flux) is linked to the land atmosphere processes coupled to the surface and PBL height is the ultimate indicator of the energetics of the boundary layer, as influenced by the surface. Indeed, future studies can build off these and look into factors such as cloudiness, circulation patterns, and vertical profiles at different transects. As mentioned, this study has provided the confidence to now under take such follow up assessments. Modifications forced by land surface changes have the ability to change atmospheric conditions of stability. High local scale spatio-temporal variations in LULC classes are noted in both of the considered transects. These spatio-temporal surface changes, manifest themselves as variations in patterns of LST. High NDVI and emissivity is observed in regions with abundant green cover and a drastic lowering is noted in built-up area clusters. Small changes in emissivity are linked with high variations in LST and ultimately in air temperature. For the Delhi city, as compared to the NE side (mainly cultivable areas) of L1 transect, the SW side (mainly the rocky terrain of the Aravalli range) has a lower evaporation rate. Low evaporation alongside a higher Bowen ratio and albedo explains high LST in the SW part of L1 transect. As temperature rises, it also leads to an elevated PBL height. From a seasonal aspect, generally across both transects, LST is found to be higher in MAM and JJAS i.e., summer months, albedo in ON and MAM, evaporation in JJAS, and Bowen ratio, as well as PBL height in MAM.
Parametric and non-parametric correlations reveal a significant negative relationship between LST and NDVI, as well as emissivity. As NDVI is an indirect indicator for LULC classes, it can be statistically said that LULC does significantly aid in altering LST. However LST is not solely dependent on emissivity or on NDVI. Other conditions, including climatic factors such as evaporation, PBL height, etc., also play an important role in altering LST. Significant strong positive relationships exist between skin temperature and evaporation, skin temperature, and PBL height and PBL height and evaporation. A significant negative relationship exists between Bowen ratio and evaporation. These associations are able to statistically establish the land-air interactions in the city. In order to further establish the modifications transpiring in the atmospheric system due to land surface changes, the alterations in occurrence, frequency and magnitude of extreme weather events in Delhi will be studied as a part of future investigations.

Madhavi Jain designed and performed the experiments. A. P. DIMRI and Dev Niyogi assisted in result analysis. All authors contributed in writing of the paper. 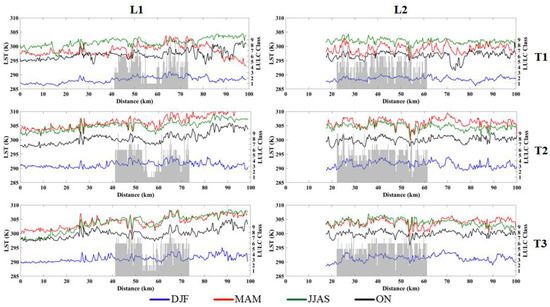