Comparison and Evaluation of the TES and ANEM Algorithms for Land Surface Temperature and Emissivity Separation over the Area of Valencia, Spain

Land Surface temperature (LST) is a key magnitude for numerous studies, especially for climatology and assessment of energy fluxes between surface and atmosphere. Retrieval of accurate LST requires a good characterization of surface emissivity. Both quantities are coupled in a single radiance measurement; for this reason, for N spectral bands available in a remote sensor, there will always be N + 1 unknowns. To solve the indeterminacy, temperature-emissivity separation methods have been proposed, among which the Temperature Emissivity Separation (TES) algorithm is one of the most widely used. The Adjusted Normalized Emissivity Method (ANEM) was proposed as a modification of the Normalized Emissivity Method (NEM) algorithm by adjusting the initial emissivity guess using an estimation provided by the Vegetation Cover Method (VCM). In this work, both methods were applied to a set of five ASTER scenes over the area of Valencia, Spain, which were recalibrated and atmospherically corrected using local radiosoundings and ground measurements. These scenes were compared to the ASTER temperature and emissivity standard products (AST08 and AST05, respectively). The comparison to reference measurements showed a better agreement of ANEM LST in low spectral contrast surfaces, with biases of +0.4 K, +0.8 K for TES and +1.4 K for the AST08 product in a rice crop site. For sea surface temperature, bias was −0.1 K for ANEM, +0.3 K for TES and +1.3 K for the AST08 product. The larger differences of the AST08 product could be ascribed mainly to the atmospheric correction based on NCEP profiles in contrast to the local correction used in TES and ANEM and to a lesser extent the Maximum-Minimum Difference (MMD) empirical relationship used by TES. In terms of emissivity, ANEM obtained biases up to ±0.007 (positive over vegetation and negative over water), while TES biases were up to −0.015. The AST05 product showed differences up to −0.050, although for high contrast areas, such as sand surfaces, it showed better accuracy than both TES and ANEM. A comparison between TES and ANEM on four different classes within the scene showed a systematic difference between both algorithms, which was more pronounced for low spectral contrast surfaces. Therefore, ANEM improves the accuracy at low spectral contrast surfaces, while obtaining similar results to TES at higher spectral contrast surfaces, such as urban areas. The combination of both methods could provide a procedure benefiting from the strengths shown by each of them. View Full-Text
Keywords: TES; ANEM; land surface temperature; emissivity; ASTER; thermal infrared TES; ANEM; land surface temperature; emissivity; ASTER; thermal infrared
►▼ Show Figures 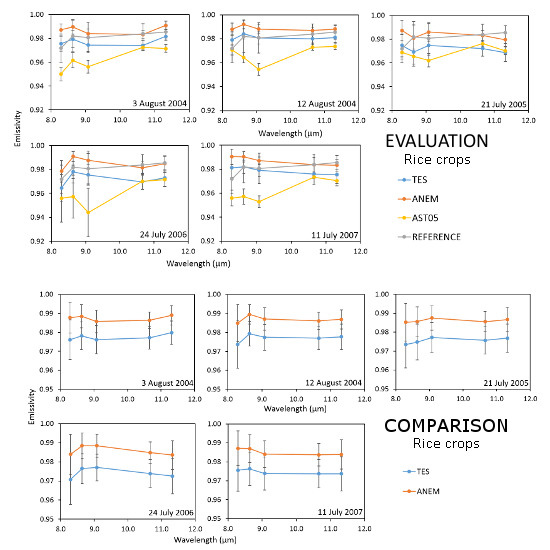