Effects of Urban Expansion on Forest Loss and Fragmentation in Six Megaregions, China
Next Article in Special Issue

Grasslands represent a significant source of biodiversity that is important to monitor over large extents. The Spectral Variation Hypothesis (SVH) assumes that the Spectral Heterogeneity (SH) measured from remote sensing data can be used as a proxy for species diversity. Here, we argue the hypothesis that the grassland’s species differ in their phenology and, hence, that the temporal variations can be used in addition to the spectral variations. The purpose of this study is to attempt verifying the SVH in grasslands using the temporal information provided by dense Satellite Image Time Series (SITS) with a high spatial resolution. Our method to assess the spectro-temporal heterogeneity is based on a clustering of grasslands using a robust technique for high dimensional data. We propose new SH measures derived from this clustering and computed at the grassland level. We compare them to the Mean Distance to Centroid (MDC). The method is experimented on 192 grasslands from southwest France using an intra-annual multispectral SPOT5 SITS comprising 18 images and using single images from this SITS. The combination of two of the proposed SH measures—the within-class variability and the entropy—in a multivariate linear model explained the variance of the grasslands’ Shannon index more than the MDC. However, there were no significant differences between the predicted values issued from the best models using multitemporal and monotemporal imagery. We conclude that multitemporal data at a spatial resolution of 10 m do not contribute to estimating the species diversity. The temporal variations may be more related to the effect of management practices. View Full-Text
Keywords: spectral variation hypothesis; spectral heterogeneity; dense satellite image time series; alpha-diversity; grasslands spectral variation hypothesis; spectral heterogeneity; dense satellite image time series; alpha-diversity; grasslands
►▼ Show Figures 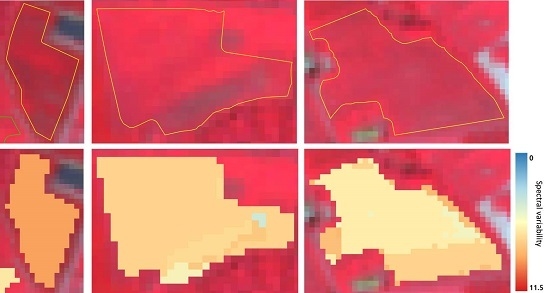