We estimated surface salinity flux and solar penetration from satellite data, and performed model simulations to examine the impact of including the satellite estimates on temperature, salinity, and dissolved oxygen distributions on the Louisiana continental shelf (LCS) near the annual hypoxic zone. Rainfall data from the Tropical Rainfall Measurement Mission (TRMM) were used for the salinity flux, and the diffuse attenuation coefficient (Kd) from Moderate Resolution Imaging Spectroradiometer (MODIS) were used for solar penetration. Improvements in the model results in comparison with in situ observations occurred when the two types of satellite data were included. Without inclusion of the satellite-derived surface salinity flux, realistic monthly variability in the model salinity fields was observed, but important inter-annual variability was missed. Without inclusion of the satellite-derived light attenuation, model bottom water temperatures were too high nearshore due to excessive penetration of solar irradiance. In general, these salinity and temperature errors led to model stratification that was too weak, and the model failed to capture observed spatial and temporal variability in water-column vertical stratification. Inclusion of the satellite data improved temperature and salinity predictions and the vertical stratification was strengthened, which improved prediction of bottom-water dissolved oxygen. The model-predicted area of bottom-water hypoxia on the Louisiana shelf, an important management metric, was substantially improved in comparison to observed hypoxic area by including the satellite data. View Full-Text
Keywords: TRMM; MODIS; Louisiana shelf; coastal hypoxia; NCOM-LCS ocean model TRMM; MODIS; Louisiana shelf; coastal hypoxia; NCOM-LCS ocean model
►▼ Show Figures 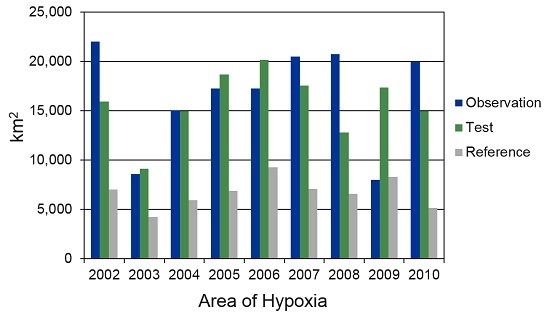