Brazil and China have a long-term joint space based sensor program called China-Brazil Earth Resources Satellite (CBERS). The most recent satellite of this program (CBERS-4) was successfully launched on 7 December 2014. This work describes a complete procedure, along with the associated uncertainties, used to calculate the in-flight absolute calibration coefficients for the sensors Multispectral Camera (MUX) and Wide-Field Imager (WFI) on-board CBERS-4. Two absolute radiometric calibration techniques were applied: (i) reflectance-based approach and (ii) cross-calibration method. A specific site at Algodones Dunes region located in the southwestern portion of the United States of America was used as a reference surface. Radiometric ground and atmospheric measurements were carried out on 9 March 2015, when CBERS-4 passed over the region. In addition, a cross-calibration between both MUX and WFI on-board CBERS-4 and the Operational Land Imager (OLI) on-board Landsat-8 was performed using the Libya-4 Pseudo Invariant Calibration Site. The gain coefficients are now available: 1.68, 1.62, 1.59 and 1.42 for MUX and 0.379, 0.498, 0.360 and 0.351 for WFI spectral bands blue, green, red and NIR, respectively, in units of (W/(m2·sr·μm))/DN. These coefficients were determined with uncertainties lower than 3.5%. As a validation of these radiometric coefficients, cross-calibration was also undertaken. An evaluation of radiometric consistency was performed between the two instruments (MUX and WFI) on-board CBERS-4 and with the well calibrated Landsat-7 ETM+. Results show that the reflectance values match in all the analogous spectral bands within the specified calibration uncertainties. View Full-Text
Keywords: absolute calibration; CBERS-4; cross-calibration; Landsat; radiometric calibration; reflectance-based absolute calibration; CBERS-4; cross-calibration; Landsat; radiometric calibration; reflectance-based
►▼ Show Figures 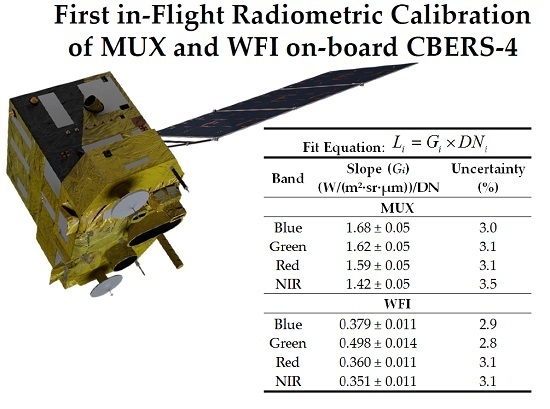