Northeast China is located at high northern latitudes and is a typical region of relatively high sensitivity to global climate change. Studies of the land surface phenology in Northeast China and its response to climate change are important for understanding global climate change. In this study, the land surface phenology parameters were calculated using the third generation dataset from the Global Inventory Modeling and Mapping Studies (GIMMS 3g) that was collected from 1982 to 2013 were estimated to analyze the variations of the land surface phenology in Northeast China at different scales and to discuss the internal relationships between phenology and climate change. We examined the phonological changes of all ecoregions. The average start of the growing season (SOS) did not exhibit a significant trend throughout the study area; however, the end of the growing season (EOS) was significantly delayed by 4.1 days or 0.13 days/year (p < 0.05) over the past 32 years. The SOS for the Hulunbuir Plain, Greater Khingan Mountains and Lesser Khingan Mountains was earlier, and the SOS for the Sanjing, Songnen and Liaohe Plains was later. In addition, the EOS of the Greater Khingan Mountains, Lesser Khingan Mountains and Changbai Mountains was later than the EOS of the Liaohe Plain. The spring temperature had the greatest impact on the SOS. Precipitation had an insignificant impact on forest SOS and a relatively large impact on grassland SOS. The EOS was affected by both temperature and precipitation. Furthermore, although temperature had a lag effect on the EOS, no significant lag effect was observed for the SOS. View Full-Text
Keywords: land surface phenology; GIMMS 3g; NDVI; climate change; northeast of China land surface phenology; GIMMS 3g; NDVI; climate change; northeast of China
►▼ Show Figures 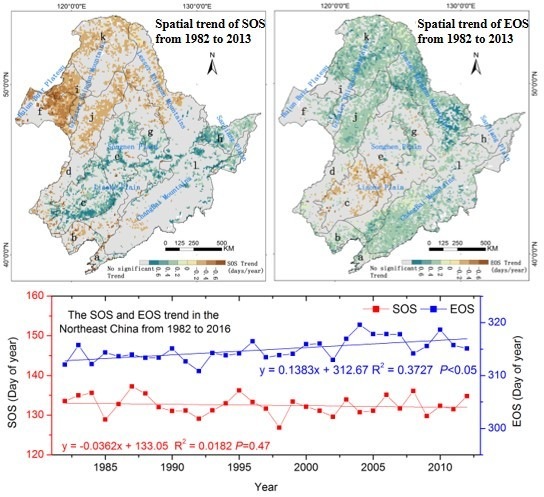