Advancements for Snowmelt Monitoring by Means of Sentinel-1 SAR

The Sentinel satellite constellation series, developed and operated by the European Space Agency, represents the dedicated space component of the European Copernicus program, committed to long-term operational services in environment, climate and security. We developed, tested and evaluated an algorithm for generating maps of snowmelt area from C-band synthetic aperture radar (SAR) data of the Sentinel-1 mission. For snowmelt classification, a change detection method is applied, using multitemporal dual-polarized SAR data acquired in Interferometric Wide swath (IW) mode, the basic operation mode over land surfaces. Of particular benefit for wet snow retrievals are the high instrument stability, the high spatial resolution across the 250 km wide swath, and the short revisit time. In order to study the impact of polarization, we generated maps of melting snow using data of the VV-polarized channel, the VH-polarized channel and a combined VV- and VH-based channel using a weighting function that accounts for effects of the local incidence angle. Comparisons are performed with snow maps derived from Landsat images over study areas in the Alps and in Iceland. The pixel-by-pixel comparisons show good agreement between the snow products of the two sensors, with the best performance for retrievals based on the combined (VV and VH) channel and a minor decline for the VH-based product. The VV-based snowmelt extent product shows a drop-off in quality over areas with steep terrain because of the decreasing backscatter contrast of snow-covered versus snow-free surfaces on fore-slopes. The investigations demonstrate the excellent capability of the Sentinel-1 mission for operational monitoring of snowmelt areas. View Full-Text
Keywords: Sentinel-1; SAR; snow extent; snowmelt; Alps; Iceland Sentinel-1; SAR; snow extent; snowmelt; Alps; Iceland
►▼ Show Figures 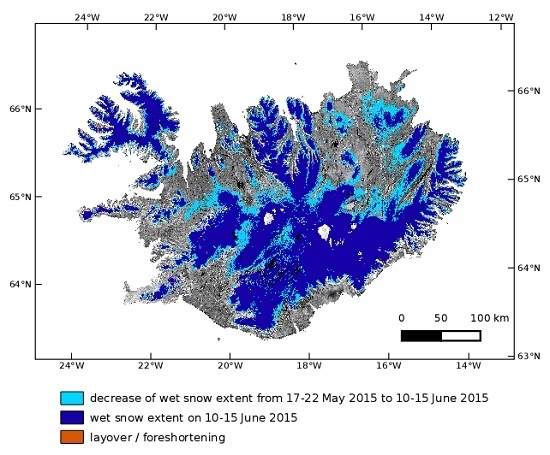