Remote sensing offers a low-cost method for developing spatially continuous crop production statistics across large areas and through time. Nevertheless, it has been difficult to characterize the production of individual smallholder farms, given that the land-holding size in most areas of South Asia (<2 ha) is smaller than the spatial resolution of most freely available satellite imagery, like Landsat and MODIS. In addition, existing methods to map yield require field-level data to develop and parameterize predictive algorithms that translate satellite vegetation indices to yield, yet these data are costly or difficult to obtain in many smallholder systems. To overcome these challenges, this study explores two issues. First, we employ new high spatial (2 m) and temporal (bi-weekly) resolution micro-satellite SkySat data to map sowing dates and yields of smallholder wheat fields in Bihar, India in the 2014–2015 and 2015–2016 growing seasons. Second, we compare how well we predict sowing date and yield when using ground data, like crop cuts and self-reports, versus using crop models, which require no on-the-ground data, to develop and parameterize prediction models. Overall, sow dates were predicted well (R2 = 0.41 in 2014–2015 and R2 = 0.62 in 2015–2016), particularly when using models that were parameterized using self-report sow dates collected close to the time of planting and when using imagery that spanned the entire growing season. We were also able to map yields fairly well (R2 = 0.27 in 2014–2015 and R2 = 0.33 in 2015–2016), with crop cut parameterized models resulting in the highest accuracies. While less accurate, we were able to capture the large range in sow dates and yields across farms when using models parameterized with crop model data and these estimates were able to detect known relationships between management factors (e.g., sow date, fertilizer, and irrigation) and yield. While these results are specific to our study site in India, it is likely that the methods employed and the lessons learned are applicable to smallholder systems more generally across the globe. This is of particular interest given that similar high spatio-temporal resolution micro-satellite data will become increasingly available in the coming years. View Full-Text
Keywords: smallholder farms; SkySat; Terra Bella; high-resolution satellite imagery; agriculture; yields smallholder farms; SkySat; Terra Bella; high-resolution satellite imagery; agriculture; yields
►▼ Show Figures 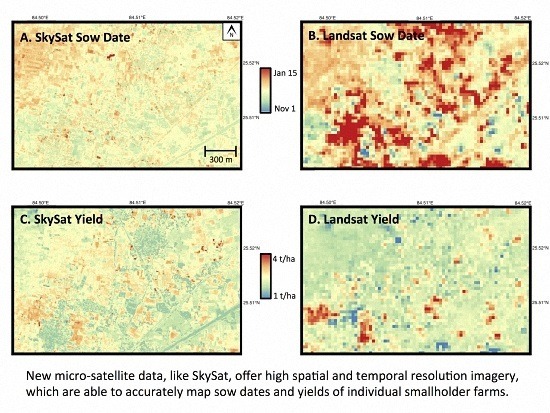