Remote sensing-based approaches to lithological mapping are traditionally pixel-oriented, with classification performed on either a per-pixel or sub-pixel basis with complete disregard for contextual information about neighbouring pixels. However, intra-class variability due to heterogeneous surface cover (i.e., vegetation and soil) or regional variations in mineralogy and chemical composition can result in the generation of unrealistic, generalised lithological maps that exhibit the “salt-and-pepper” artefact of spurious pixel classifications, as well as poorly defined contacts. In this study, an object-based image analysis (OBIA) approach to lithological mapping is evaluated with respect to its ability to overcome these issues by instead classifying groups of contiguous pixels (i.e., objects). Due to significant vegetation cover in the study area, the OBIA approach incorporates airborne multispectral and LiDAR data to indirectly map lithologies by exploiting associations with both topography and vegetation type. The resulting lithological maps were assessed both in terms of their thematic accuracy and ability to accurately delineate lithological contacts. The OBIA approach is found to be capable of generating maps with an overall accuracy of 73.5% through integrating spectral and topographic input variables. When compared to equivalent per-pixel classifications, the OBIA approach achieved thematic accuracy increases of up to 13.1%, whilst also reducing the “salt-and-pepper” artefact to produce more realistic maps. Furthermore, the OBIA approach was also generally capable of mapping lithological contacts more accurately. The importance of optimising the segmentation stage of the OBIA approach is also highlighted. Overall, this study clearly demonstrates the potential of OBIA for lithological mapping applications, particularly in significantly vegetated and heterogeneous terrain. View Full-Text
Keywords: lithological mapping; OBIA; airborne LiDAR; multispectral; Troodos ophiolite lithological mapping; OBIA; airborne LiDAR; multispectral; Troodos ophiolite
►▼ Show Figures 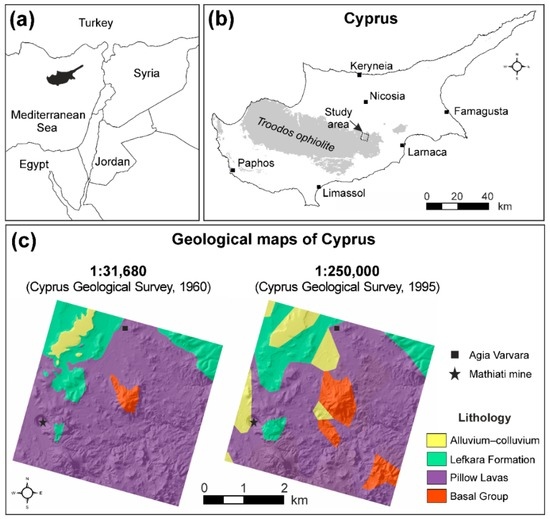 
Grebby, Stephen; Field, Elena; Tansey, Kevin. 2016. "Evaluating the Use of an Object-Based Approach to Lithological Mapping in Vegetated Terrain." Remote Sens. 8, no. 10: 843.