In this study, the interferometric coherence calculated from 12-day Sentinel-1 image pairs was analysed in relation to mowing events on agricultural grasslands. Results showed that after a mowing event, median VH (vertical transmit, horizontal receive) and VV (vertical transmit, vertical receive) polarisation coherence values were statistically significantly higher than those from before the event. The shorter the time interval after the mowing event and the first interferometric acquisition, the higher the coherence. The coherence tended to stay higher, even 24 to 36 days after a mowing event. Precipitation caused the coherence to decrease, impeding the detection of a mowing event. Given the three analysed acquisition geometries, it was concluded that afternoon acquisitions and steeper incidence angles were more useful in the context of this study. In the case of morning acquisitions, dew might have caused a decrease of coherence for mowed and unmowed grasslands. Additionally, an increase of coherence after a mowing event was not evident during the rapid growth phase, due to the 12-day separation between the interferometric acquisitions. In future studies, six-day pairs utilising Sentinel-1A and 1B acquisitions should be considered. View Full-Text
Keywords: synthetic aperture radar; SAR, mowing detection; grasslands; agriculture; interferometric coherence; weather radar; precipitation estimates synthetic aperture radar; SAR, mowing detection; grasslands; agriculture; interferometric coherence; weather radar; precipitation estimates
►▼ Show Figures 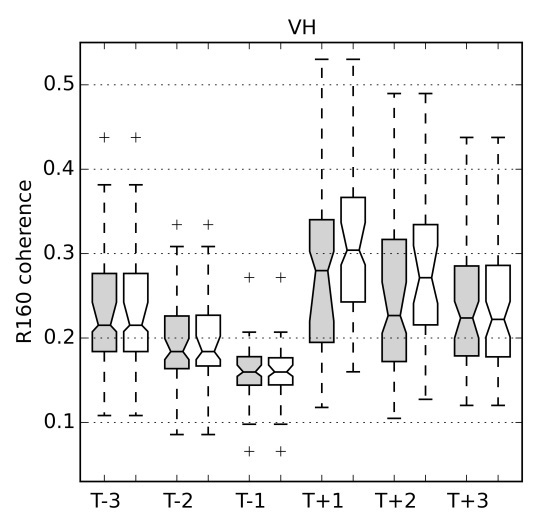