Efficient Wetland Surface Water Detection and Monitoring via Landsat: Comparison with in situ Data from the Everglades Depth Estimation Network
Next Article in Special Issue

Coastal bays, such as Barataria Bay, are important transition zones between the terrigenous and marine environments that are also optically complex due to elevated amounts of particulate and dissolved constituents. Monthly field data collected over a period of 15 months in 2010 and 2011 in Barataria Bay were used to develop an empirical band ratio algorithm for the Landsat-5 TM that showed a good correlation with the Colored Dissolved Organic Matter (CDOM) absorption coefficient at 355 nm (ag355) (R2 = 0.74). Landsat-derived CDOM maps generally captured the major details of CDOM distribution and seasonal influences, suggesting the potential use of Landsat imagery to monitor biogeochemistry in coastal water environments. An investigation of the seasonal variation in ag355 conducted using Landsat-derived ag355 as well as field data suggested the strong influence of seasonality in the different regions of the bay with the marine end members (lower bay) experiencing generally low but highly variable ag355 and the freshwater end members (upper bay) experiencing high ag355 with low variability. Barataria Bay experienced a significant increase in ag355 during the freshwater release at the Davis Pond Freshwater Diversion (DPFD) following the Deep Water Horizon oil spill in 2010 and following the Mississippi River (MR) flood conditions in 2011, resulting in a weak linkage to salinity in comparison to the other seasons. Tree based statistical analysis showed the influence of high river flow conditions, high- and low-pressure systems that appeared to control ag355 by ~28%, 29% and 43% of the time duration over the study period at the marine end member just outside the bay. An analysis of CDOM variability in 2010 revealed the strong influence of the MR in controlling CDOM abundance in the lower bay during the high flow conditions, while strong winds associated with cold fronts significantly increase CDOM abundance in the upper bay, thus revealing the important role these events play in the CDOM dynamics of the bay. View Full-Text
Keywords: CDOM; Barataria Bay; Landsat; empirical algorithm CDOM; Barataria Bay; Landsat; empirical algorithm
►▼ Show Figures 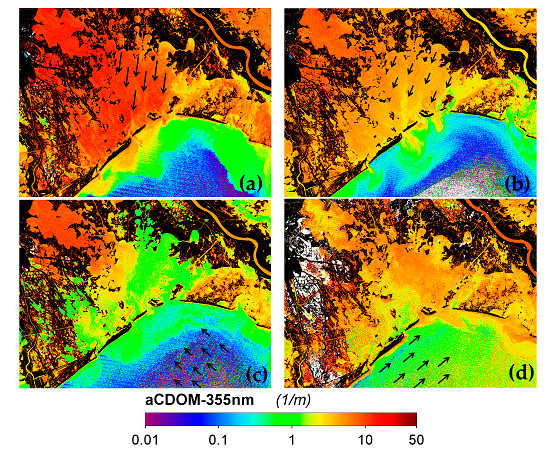