Greenhouse detection and mapping via remote sensing is a complex task, which has already been addressed in numerous studies. In this research, the innovative goal relies on the identification of greenhouse horticultural crops that were growing under plastic coverings on 30 September 2013. To this end, object-based image analysis (OBIA) and a decision tree classifier (DT) were applied to a set consisting of eight Landsat 8 OLI images collected from May to November 2013. Moreover, a single WorldView-2 satellite image acquired on 30 September 2013, was also used as a data source. In this approach, basic spectral information, textural features and several vegetation indices (VIs) derived from Landsat 8 and WorldView-2 multi-temporal satellite data were computed on previously segmented image objects in order to identify four of the most popular autumn crops cultivated under greenhouse in Almería, Spain (i.e., tomato, pepper, cucumber and aubergine). The best classification accuracy (81.3% overall accuracy) was achieved by using the full set of Landsat 8 time series. These results were considered good in the case of tomato and pepper crops, being significantly worse for cucumber and aubergine. These results were hardly improved by adding the information of the WorldView-2 image. The most important information for correct classification of different crops under greenhouses was related to the greenhouse management practices and not the spectral properties of the crops themselves. View Full-Text
Keywords: Landsat 8; WorldView-2; time series; object-based classification; greenhouse crops; decision tree Landsat 8; WorldView-2; time series; object-based classification; greenhouse crops; decision tree
►▼ Show Figures 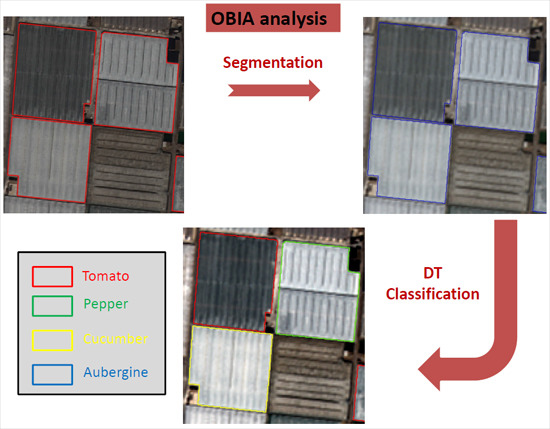